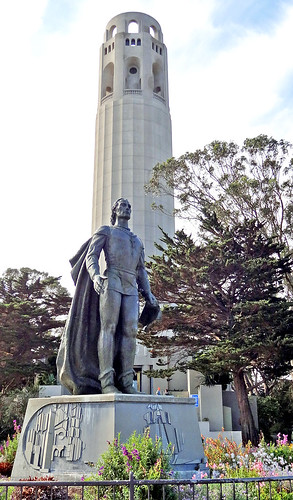 This is from a chapter in a book I'm writing, "MythAmerica the Hidden Histories, Dirty Little Secrets and Outright Lies of American History

UNPACKING A WORLD OF MYTHS IN

"We need to understand our history not tear it down" is one of the charges leveled against the movement to take down statues of Columbus, saying it is an attempt to hide history, to blank out the role that people like Columbus played in the history of the Americas. But to the contrary, it is exactly an opportunity to take a real look at just what Columbus did do, take its full measure and put it into historical context--the results of which those who tell us not to ignore history might well regret.

So on the upcoming 528th anniversary of Columbus's first foray into the Americas, here's a timely recap of the Columbus record. Part one deals with the nature of the world and people Columbus intruded on, debunking the Eurocentric myth that Columbus "discovered" a land that was barely populated, an undeveloped and untamed wilderness despite millions of people already living there for thousands of years. Part 2 to follow debunks the Columbus-as-hero myth by examining how his genocidal attacks on the indigenous populations of the Caribbean led to the opening of the African slave trade, and how and why all this has been justified over the centuries.

When asked by an anthropologist what the Indians called America before the white man came, an Indian said simply, "Ours." Vine Deloria, Jr., Native American author and activist

Vermont and Maine are the most recent of the growing list of states and cities that no longer recognize and celebrate Columbus day. The 1992 five hundred-year anniversary celebration of Columbus's voyages to the Americas turned out to be quite a Pandora's box for the "Columbus Discovered America" (CDA) myth. Along with the celebrations came a fierce debate about Columbus's legacy, an upsurge of activism around Native American rights and a broad movement to de-throne Columbus Day and replace it by an Indigenous People's or Native American day. That challenge became widespread enough to even motivate an HBO Sopranos episode presenting the Native American point of view. Yet despite all this, as we approach another Columbus Day celebration we can expect to still hear that a European discovered America. But the official story is almost wholly myth. What little that is true is mostly trivia: the date of his first voyage, the names of the 3 ships, and how Columbus "discovered" America by sailing west from Europe in search of a sea route to Asia. Columbus's first voyage landing in the Bahamas is very much the beginning and end of the story, and so antiseptically described as to prove shocking when the truths of what he did are exposed.

It is often said that history is written from the point of view of the conquerors, perhaps never so clearly demonstrated than by this Eurocentric assertion, the foundational myth of American history. How can it be said that Columbus "discovered" a land when tens of millions of people were already living there for tens of thousands of years? There was no "America" to discover--nor was there a "Europe" yet. There weren't any "Indians" either. There were the Dine (Navajo), Haudenosaunee (Iriquois), Tenocha (Aztecs), and numerous other peoples with varying cultures and languages. They didn't become Indians until Columbus mislabeled them as such in his mistaken belief that he had reached Asia. The populations of this new-to-Europeans land had ways of life in many ways even more diverse than that of Europe at the time, speaking over 2,000 languages. But it's more than just semantics that Columbus did not "discover" America. Packed into those three words is a world where the Americas were a barely populated, undeveloped and untamed wilderness, where he brought civilization to a primitive people while trying to find a shortcut trade route to Asia, all of which led to the creation of the most exceptional nation in the history of the world, the United States of America. But the only way Columbus could have discovered 1/4th of the globe was if somehow those people did not count, were less-than-human. One Spanish 'scholar' described the indigenous as "Creatures of a subhuman nature who were intended by God to be placed under the authority of civilized and virtuous princes or nations, so that they may learn, from the might, wisdom, and law of their conquerors, to practice better morals, worthier customs and a more civilized way of life."

Another part of the myth is that Columbus proved the world was round, despite the fact that the Greeks knew that 2,000 years before, as well as most educated people in 1492, especially those who worked on the sea--like Columbus.

So while he did not discover America--there can be no doubt that Columbus's voyages were world changing to the extent that 1492 is considered a dividing line for when "modern" history began, with what came before designated as "Pre-Columbian history".

MYTH #2 : THE AMERICAS WERE BARELY POPULATED

"We are left with the startling realization that Europeans were not coming to a 'virgin wilderness' as some called it, but were invading a land which in some areas was as densely populated as their homelands... Columbus had stumbled upon what was a new world only in the European mind." (Gary Nash, "Red White and Black, The Peoples of Early North America".)

Equally central to CDA is the America that Alexis deToqueville described in 1835 as "Inhabited only by wandering tribes who had no thought of profiting by the natural riches of the soil... an empty continent, a desert land awaiting its inhabitants.'' In fact, it is an eye-opening revelation for most people to learn that the population of the Americas--North, South, and the Caribbean--was at least as large as the population of Europe at the time of Columbus. For perspective, the entire world population in 1500 a.d. was around 500 million people. Among the five largest cities in the world was Tenochtitlan, where Mexico City now stands, with a population of 250,000--larger than Paris and London at the time! While a longstanding debate has gone on among demographers and historians in regard to the total population of the Americas, a consensus has emerged of no less than 50 million and as many as 100 million, with an estimated 10-15 million north of the Rio Grande-overall, roughly the same or even larger than the population of Europe the time.

As one educator put it, "The vehemence with which scholars, and at times the larger public, have debated these figures is not just because it is very difficult to determine population size. It is also because the debate over the population is part of the debate over whether the arrival of Columbus and the millions of Europeans who followed him was a great advance in the history of civilization... or an unparalleled catastrophe that virtually exterminated a large and flourishing native population (as some Americans and Europeans argued during the more somber commemorations of the 500th anniversary in 1992)." (Mr. History, Educator Pages.com.)

Related Topic(s): American Exceptionalism; American_History; Columbus-Christopher, Add Tags
Add to My Group(s)
Go To Commenting
The views expressed herein are the sole responsibility of the author and do not necessarily reflect those of this website or its editors.