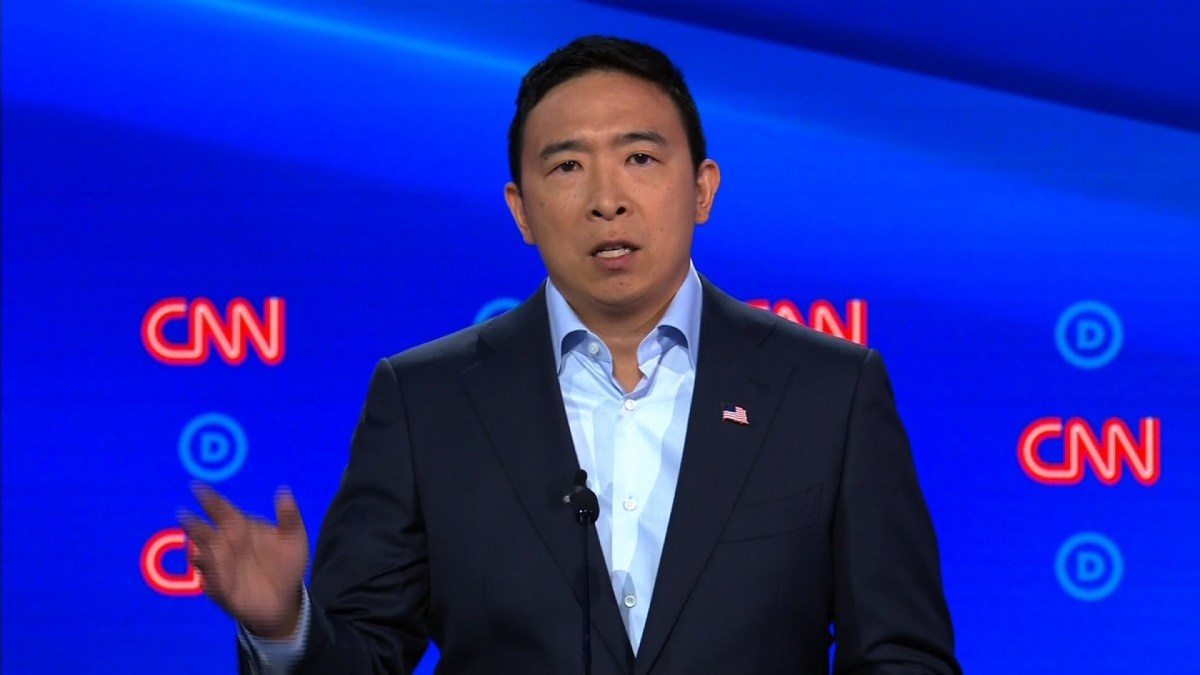 Americans are discussing the possibility of a universal basic income (UBI) more seriously than ever before, largely due to the surprisingly popular campaign of Democratic presidential candidate Andrew Yang. Yang has made UBI the central issue of his platform, promising a "Freedom Dividend" paid for by a Value Added Tax on businesses which would give every American between the ages of 18 and 64 an unconditional $1,000 a month to help offset the looming crisis of automation replacing US jobs.

"In the next 12 years, 1 out of 3 American workers are at risk of losing their jobs to new technologies -- and unlike with previous waves of automation, this time new jobs will not appear quickly enough in large enough numbers to make up for it," Yang's campaign site argues. "To avoid an unprecedented crisis, we're going to have to find a new solution, unlike anything we've done before. It all begins with the Freedom Dividend, a universal basic income for all American adults, no strings attached a foundation on which a stable, prosperous, and just society can be built."

Yang is absolutely correct that automation is going to be replacing the jobs of many people in the very near future, and he is absolutely correct that new solutions unlike anything ever tried before are going to be necessary to help address this problem. But his plan, and indeed all the most publicized plans which involve the implementation of a universal basic income, will necessarily lead to an oppressive oligarchic dystopia unlike anything we've ever seen before.

Jeff Bezos is in favor of a universal basic income. https://t.co/ohsW00PNKS

Do you know who supports the implementation of a UBI besides Andrew Yang? Billionaires. Lots of billionaires, especially the new money tech billionaires who are positioning themselves to inherit the earth in the transition to a new paradigm dominated by automation and artificial intelligence. Billionaires like Jeff Bezos, Pierre Omidyar, Mark Zuckerberg, Jack Dorsey, Elon Musk, Richard Branson, Bill Gross, Tim Draper, and more moderately Bill Gates, have all been seen advocating for a policy that is now being popularized as one which would level the economic playing field and take power away from the billionaire class.

Now why would that be? Why would a group of people who've clawed their way up to positions of immense wealth control, enabling them to live as modern-day kings, be so eager to suddenly give away that power? Why would they break with the trend we've consistently observed in rulers since the dawn of recorded history and voluntarily relinquish the power they fought to claim without a fight? Are billionaires just naturally good people inherently predisposed to compassionate action and wealth redistribution? Have we been wrong about Jeff Bezos being a real-life super-villain this entire time?

Of course not. This increasingly powerful class of new money tech plutocrats are not pushing to give power away, they're pushing to secure more. As Jimmy Stewart's character says in It's A Wonderful Life, Potter isn't selling, Potter's buying.

I am not arguing against the general principle of universal basic income here. If humanity is to learn to collaborate in a healthy way with the ecosystem in which we evolved, a lot more of us are going to have to start doing a lot less. We're going to have to stop using up energy driving to jobs the world doesn't need to produce crap you have to propagandize people into believing they want so they'll spend money on it and then throw it in the landfill. That's obviously an insane way for an increasingly technologically advanced species to continue to function, and one way or another we are going to have to start doing a lot more nothing quite soon.

But imagine what will happen with a system of the kind Yang and the tech billionaires are proposing. Imagine what will happen in a society where people are no longer necessary and have nothing the powerful need. Imagine what will happen when people become dependent on a subsistence UBI set up by the already plutocrat-controlled government to sustain them when plutocrat-owned technologies render their labor completely moot. Imagine a world where a few increasingly consolidated automation firms produce more and more of the goods and services once provided by human labor and re-collect all taxes they have to pay into the UBI from a public forced by their subsistence wages to buy automation-made products and services.

Think about what would happen in that situation if people decided they weren't being treated fairly by the existing system. What recourse would they have? They can't organize labor strikes if they have no labor. They can't boycott if everything is made by the same corrupt system. Mass demonstrations and civil disobedience would go unnoticed by a power structure that needs nothing from its populace. Violent revolution would be an unwinnable game as security systems protecting the infrastructure of the powerful would also become automated. People would cease to be active participants in their society, and would instead be merely along for the ride at the whims of the oligarchs, for as long as the oligarchs deemed them not too inconvenient to keep around.

Because our last bargaining chips would have been taken away from us.

Think about how such a paradigm would dance with the current populist movements we're seeing in the world today as people grow upset with their already oppressive living conditions. The left will be neutered far more definitively than it has been by anything that government agencies have ever been able to engineer; the workers can't unite if there are no workers. Yellow Vests-type demonstrations would have no effect on a power structure that doesn't require law and order outside its automation complexes. Attempts to vote the problem away will be laughed off by a political system that is even more oligarch-controlled than it already is.

Related Topic(s): Billionaires; Dystopia; Income Inequality; Orwellian; Revolution; Universal Basic Income, Add Tags
Add to My Group(s)
Go To Commenting
The views expressed herein are the sole responsibility of the author and do not necessarily reflect those of this website or its editors.