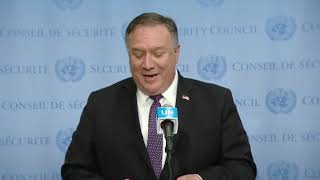 Pompeo triggers snapback sanctions on Iran at UN Secretary of State Mike Pompeo on Thursday notified the United Nations that the U.S. is initiating the process to reinstate all U.N. sanctions on Iran that were ...
(Image by YouTube, Channel: The Hill)   Details   DMCA

US Secretary of State Mike Pompeo announcing US will implement UN snap back sanctions on Iran.

If there were any doubt the US is a menace to peace and security in the world its latest gambit with the UN Security Council should put that notion to rest.

Scott Ritter in his latest, "US is willing to dismantle UN Security Council to put pressure on Iran",[1] gives a detailed account to what the US is up to regarding Iran, the 2015 nuclear deal with it and "snap back" sanctions that were part of the deal if Iran was not complying.

Well Iran had complied fully with the nuclear deal up to the time Trump reneged on it and withdrew the US from it in 2018.

With the European signatories to the deal dragging their feet to keep the deal alive, even without the US, Iran did increase its level of uranium enrichment.

But now the issue of UN snap back sanctions is the primary focus of "official" Washington. It appears the US is willing to do anything to get the UN sanctions implemented even though the Security Council voted against the measure a week ago. Even US allies Britain, France and Germany have said they'll oppose US intentions to impose the snap back sanctions on Iran if the measure comes before the Council again.

Retired. The author of "DECEIT AND EXCESS IN AMERICA, HOW THE MONEYED INTERESTS HAVE STOLEN AMERICA AND HOW WE CAN GET IT BACK", Authorhouse, 2009
Related Topic(s): Iran; Sanctions; Un Security Council, Add Tags
Add to My Group(s)
Go To Commenting
The views expressed herein are the sole responsibility of the author and do not necessarily reflect those of this website or its editors.