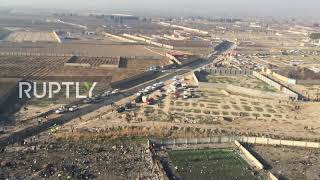 It shouldn't come as a surprise that a terrible incident/accident happened some days ago in Iran. As we now know within hours of the Iranian's sending missiles attacking two separate US military bases in Iraq-in retaliation over US President Trump ordering the assassination of Iranian Major General Qassem Suleimani outside of Baghdad's international airport-a Ukraine Airlines Flight 752 passenger jet bound for Kiev was shot down by an Iranian missile soon after take-off from Tehran, killing all 176 people aboard.

The latest account according to IRGC, Iran Revolutionary Guard Corps, the Ukrainian airliner was traveling at an altitude consistent with a "hostile flight" flying too close to an Iranian military site. Iranian national air defense had been placed on high alert ready to "respond to possible threats of the highest level".

Apparently Major General Hussein Salami, the IRGC commander, had 10 seconds to determine the character of the blip on his radar screen and made the critical error authorizing the missile that destroyed the plane. Most of the passengers were Iranians.

Salami, after becoming aware of the true nature of the incident, said, "I wish I was dead." Accepting full responsibility for his grave error further saying, "I swear on the life of my children... I wish I had been inside that plane and fell down and burned along with those loved ones instead of witnessing this tragic incident."

Yesterday Iranian President Hassan Rouhani said "human error" caused the horrific crash and "The Iranian Republic of Iran regrets this disastrous mistake." Rouhani has called for a special probe, part of "extensive investigations" into the incident. A special court will try the case. Early this morning Iran time arrests have been made though no names have been released.

Okay... let's look a bit closer why such an incident took place.

Iran's air defenses were on high alert expecting el presidente Trump to retaliate after the two US military bases in Iraq were attacked by Iranian missiles--this in retaliation of Trump ordering the assassination of Suleimani days earlier.

Though the US is not directly responsible for Salami taking the action he took, the US is complicit in forcing Iran to be on high military alert over potential US military actions and provocations. Let's remember Iran had recently intercepted and downed a US military drone over Iranian air space. A US aircraft carrier plies the Persian Gulf directly off the Iranian coast. Plus there's the daily ranting of a US president that constantly bashes Iran and its government.

The past few days has seen protests in the streets of Tehran over the downing of the Ukraine plane, the loss of life, and blaming the Khomenei regime for the incident.

Here in the US armchair fool (pundit) John Bolton is gloating over the people demonstrating in Tehran over the Ukraine plane incident. The war monger supreme upchucked the following, "The Khomenei regime has never been under more stress. Regime change is in the air." Ah, John, no it isn't. What's in the air is the foul odor in your closed-off sealed room you inhabit which you're smelling. And regime change in Iran is the same sorry mirage you've been seeing for years. Only reality in Iran or anywhere else isn't your strong suit. Never was; never will be. Nobody cares or is interested in anything you have to say, notwithstanding the brain-dead sorts who frequent FOX, FAUX NEWS.

As for the people protesting in Tehran? Well after witnessing their protests from afar over these past few years it wouldn't be surprising if the CIA, NGO, National Endowment for Humanity sponsored some agent-provocateurs to lead the chants against Khomenei and the Iranian government.

Regime change isn't likely occur in Iran and certainly not a US-inspired one. Russia and China won't let that happen. They along with Iran recently conducted joint naval exercises in the Arabian Sea.

Incidents, real or false flag, accidents, US provocations against Iran, are going to continue unless the US changes its policies and withdraws its military forces from the Middle east. That's not going happen with this administration.

Retired. The author of "DECEIT AND EXCESS IN AMERICA, HOW THE MONEYED INTERESTS HAVE STOLEN AMERICA AND HOW WE CAN GET IT BACK", Authorhouse, 2009
Related Topic(s): Accident; Complicity; Mischief; Provocation; Retaliation; Threats, Add Tags
Add to My Group(s)
Go To Commenting
The views expressed herein are the sole responsibility of the author and do not necessarily reflect those of this website or its editors.