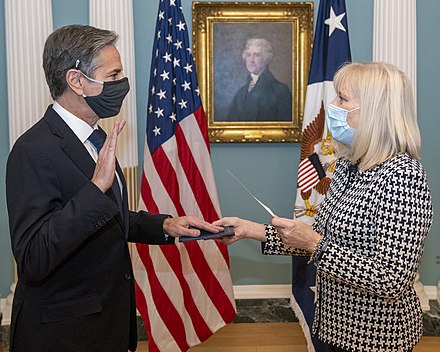 "Some governments incarcerate journalists, harass them, target them for violence," Blinken stated. "Some use other, more subtle [methods] like mandating professional licenses for journalists and using endless bureaucracy to keep them out of reach, or imposing high taxes on newsprint to push independent media out of business."

Blinken's comments entirely ignored press freedom in the United States and instead focused on countries like China, Russia, Pakistan, Venezuela, Turkey, Hungary, and "third world countries" in Africa and Central Asia. Yet, he could have been describing his country.

On average, the police kill about three men per day (or 1,000 people each year). Only a small fraction of these killings result in uprisings, but when they do, journalists face repression from local police forces and city governments that decline to intervene.

Journalist Linda Tirado lost an eye in 2020 while covering the uprising after George Floyd was murdered.

Several Minneapolis Star-Tribune journalists were assaulted by police: reporter Andy Mannix was hit by a "less-lethal" munition in his foot, photojournalist Mark Vancleave's hand was injured by a rubber bullet, and photojournalist Carlos Gonzalez was pepper-sprayed.

During the first 100 days of President Joe Biden's administration, the White House has failed to take any meaningful action that would bolster First Amendment rights and improve press freedom in the United States.

The Knight First Amendment Institute put forward a "First Amendment agenda" for the Biden administration in December. Of the 12 items, just three were completed.

Biden's administration released the report from the Director of National Intelligence's office on the role of Saudi Arabia's Crown Prince Muhammad bin Salman in the murder of journalist Jamal Kashoggi.

Sanctions on International Criminal Court investigators were lifted on April 2. They were levied by former President Donald Trump in retaliation for an inquiry into war crimes in Afghanistan, and violated the First Amendment by "impeding U.S. citizens and residents from engaging in protected advocacy and association," according to the Knight Institute.

A Trump executive order targeting "diversity training" in the workplace, which encouraged "viewpoint-based discrimination" when federal contracts were awarded, was overturned as well.

Kevin Gosztola is managing editor of Shadowproof Press. He also produces and co-hosts the weekly podcast, "Unauthorized Disclosure." He was an editor for OpEdNews.com
Related Topic(s): Freedom Of The Press; Media And Democracy; Media Journalists Endangered; Media-News, Add Tags
Add to My Group(s)
Go To Commenting
The views expressed herein are the sole responsibility of the author and do not necessarily reflect those of this website or its editors.