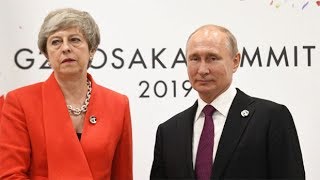 In what was billed as her last major speech before quitting Downing Street, Britain's outgoing Prime Minister Theresa May focused her concerns on Russian President Vladimir Putin, lashing out at his "cynical falsehoods" and admonishing her successor "to stand up to" the Russian leader.

Given her ignominious failure as premier over the Brexit fiasco, it seemed a strange choice of topic as she addressed the Chatham House think tank in London this past week. Her speech dealt with the wider theme of rising "populist politics" in the US and Europe. And she sought to portray Putin as an archetypal sinister figure fomenting populist threat to the "liberal" democratic order.

At one point, May claimed: "No one comparing the quality of life or economic success of liberal democracies like the UK, France and Germany to the Russian Federation would conclude that our system is obsolete."

This was supposed to be a riposte to an interview given by Putin to the Financial Times last month ahead of the G20 summit in Japan. During a lengthy interview on a wide range of issues, the Russian president was quoted as saying: "The liberal idea has become obsolete. It has come into conflict with the interests of the overwhelming majority of the population."

Putin was apparently explaining a fairly straightforward and, to many observers, valid assessment of international politics. Namely, that Western establishments and institutions, including the mainstream media, are experiencing a crisis in authority. That crisis has arisen over several years due to popular perception that the governance of the political class is not delivering on democratic demands of accountability and economic progress. That in turn has led people to seek alternatives from the established parties, a movement in the US and Europe which is denigrated by the establishment as "populist" or rabble rousing.

Putin was not advocating any particular politics or political figures. He was merely pointing out the valid observation that the so-called liberal establishment has become obsolete, or dysfunctional.

In her speech this week, May sought to lay on a sinister spin to Putin's remarks as being somehow him egging on authoritarianism and anti-democratic politics.

Another example of distortion came from Donald Tusk, the European Council President, who also said of Putin's interview: "I strongly disagree with the main argument that liberalism is obsolete. Whoever claims that liberal democracy is obsolete, also claims that freedoms are obsolete, that the rule of law is obsolete and that human rights are obsolete... For us in Europe, these are and will remain essential and vibrant values. What I find really obsolete are: authoritarianism, personality cults, the rule of oligarchs."

Tusk's depiction of Putin being anti-democratic, anti-human rights and anti-law is a specious misdirection, or as May would say, "cynical falsehood".

Political leaders like May and Tusk are living in denial. They seem to suffer from a charmed delusion that all is rosy with the state of Western democracy. That somehow Western states are the acme of benign "liberalism".

By blaming evident deep-seated problems of poverty and apathy towards establishment politics on "sinister" targets of "populism" and "authoritarian strong men" is a form of escapism from reality.

In May's case, she has added good reason to escape from reality. Her political career is ending in disaster and disgrace for having led Britain into a shambles over its Brexit departure from the European Union. Of course, she would like a distraction from her abysmal record, and she seemed to find one in her farewell speech by firing a dud diatribe at Putin.

But let's re-examine her self-congratulatory claim more closely. "No one comparing the quality of life or economic success of liberal democracies like the UK, France and Germany to the Russian Federation would conclude that our system is obsolete."

There are two parts to that. First, May is giving the usual establishment spiel about presumed superiority of Western "liberal democracy" as opposed to politics and governance in Russia.

Related Topic(s): Brexit; British Prime Minister Theresa May; Farewell; Injustice; Politics; President; Putin; Vladimir Putin, Add Tags
Add to My Group(s)
Go To Commenting
The views expressed herein are the sole responsibility of the author and do not necessarily reflect those of this website or its editors.