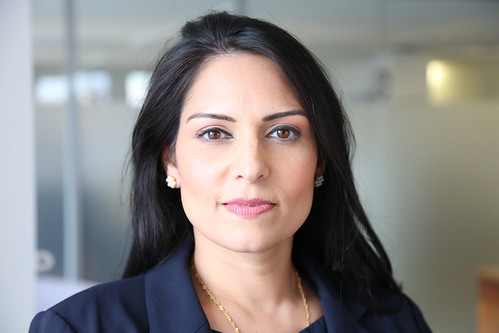 A British government minister was apparently so dedicated to her work that she spent a "family holiday" in Israel conducting 12 undisclosed meetings with Israeli officials, including prime minister Benjamin Netanyahu.

Those covert meetings brought about the downfall of Priti Patel on Wednesday night. She was forced to resign as international development secretary, responsible for Britain's overseas aid budget, admitting her actions "fell below the standards of transparency and openness" expected of a minister.

Her position became untenable as further revelations this week showed she had held two additional unrecorded meetings with Israeli officials in London and New York in September, organized and attended by a prominent Israel lobbyist.

All meetings conducted by British ministers on official business are supposed to be recorded by government civil servants.

Although the office of Theresa May, the British prime minister, has insisted it did not know of these meetings until the BBC revealed them on November 3, a report from Britain's Jewish Chroniclenewspaper suggested otherwise. It claimed that, while the meetings were not authorized beforehand, May's officials learnt of them almost immediately through Israeli counterparts.

During her vacation in Israel, Patel also dispensed with sightseeing to head instead to the Golan Heights, Syrian territory illegally occupied by Israel since 1967. Thoughtfully, the Israeli army accompanied her and had the chance to explain in detail their "humanitarian work" running a field hospital patching up those injured in southern Syria, including al Qaeda combatants.

Patel was reportedly so impressed she wanted to give the Israeli army a chunk of Britain's limited international aid. Her department's budget is apparently so tight that, according to the Independent newspaper, she approved cuts last year in aid to the Palestinians of 17 million, including projects in Gaza.

In other words, Patel hoped to give British aid intended for the most unfortunate directly to one of the best-funded and equipped armies in the world, one that already receives $4 billion a year in military aid from the United States, and which has used its swollen budget to sustain a five-decade belligerent occupation of the Palestinians and enforce its continuing occupation of the Syrian Golan.

All of this was done unofficially. In an example of understatement, the British media called all of this a "breach of ministerial protocol." The Guardian newspaper characterized Patel's behavior as a sign of her "incompetence." But is that plausible?

Was Patel so astoundingly ignorant of government protocol that she held meetings off the books with senior Israeli officials? Was it political naivety that led her to venture into the Golan under the auspices of the Israeli army and into an area from which Israel has been deeply meddling in the six-year Syrian proxy war raging just a few miles away?

And was it simply a coincidence that her unusual holiday excursion occurred as analysts have begun warning of an imminent renewed outbreak of hostilities between Israel and its northern neighbors, Syria and Lebanon?

It is worth picking through the debris in an attempt to work out what she, and Israel, might have been trying to achieve.

Patel is a prominent member of Conservative Friends of Israel (CFI), a pro-Israel lobby group to which 80 percent of the ruling Conservative party's members of parliament, including most government ministers, belong. They and a similarly entrenched group of opposition Labour MPs belonging to Labour Friends of Israel (LFI) are there to advance Israel's case in parliament and in British foreign policy.

Such MPs are invited on official "educational" trips to Israel where they get access to Israeli leaders and are wined and dined. The damaging influence of these lobbies on British politics -- and the covert nature of their activities -- were highlighted earlier this year in a four-part undercover investigation broadcast by Al Jazeera.

Related Topic(s): Antisemitism; Israel And Us Relations; Israel Bombs Syria; Israeli-palestinian; Priti Patel; Resignation; Syria, Add Tags
Add to My Group(s)
Go To Commenting
The views expressed herein are the sole responsibility of the author and do not necessarily reflect those of this website or its editors.