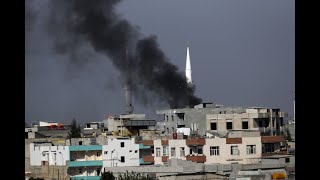 Now, adding to the chaos, President Donald Trump has finally given Turkey, NATO's second military power, the green light to invade parts of northeastern Syria after he apparently ordered a token force of US troops there to withdraw.

This, of course, puts the Turks in a growing confrontation with the region's Kurds, who have occupied large swaths of the area during Syria's civil war. The Kurdish militia, known as YPG (confusingly part of the so-called Free Syrian Army), is armed, lavishly financed and directed by the CIA and Pentagon.

Most Kurdish forces are deployed along the line of the former Berlin-Baghdad railway, a major source of warlike tensions before World War I. Interestingly, Turkey's president, Recep Tayyip Erdogan, was making a state visit to blood enemy Serbia when the Turkish offensive kicked off.

Turkey calls the Kurdish militias "terrorists" and links them to the original Kurdish resistance movement PKK which is on the US and Turkish black list. I covered the brutal conflict in eastern Anatolia (southern Turkey) between the Turkish Army and Kurdish militias known as "peshmerga." If the US can brand Syrian and Iraqi groups "terrorists," why can't the Turks do their own terrorist branding? After all, Syria, Lebanon and Iraq are in their backyard.

The US media is fiercely anti-Turkish because Ankara is seen as somewhat pro-Palestinian. Israel is a bitter foe of Turkey's Erdogan. One rarely reads anything positive about Turkey or its leader. Not very many western readers even know that since the early 1500's, Syria was part of the Ottoman Empire, the predecessor of modern Turkey. So were Iraq, Palestine, today's Israel, Saudi Arabia, and Yemen.

Most important, Iraq's vast oil fields used to belong to the Ottoman Empire until the British Empire grabbed them at the end of World War I. France seized Syria and Lebanon. Both former imperial powers are still mucking around today in the region and have the gall to criticize Turkey's involvement in neighboring Syria.

The United States has zero historic interest in the region. US troops in Syria appear to have come from the US garrison in Iraq, which, as VP Dick Cheney hoped, would become a central US military base for the entire Mideast. The Washington war party is moaning that Trump has "betrayed" the Kurds. Their unofficial head, Sen. Lindsey Graham, is demanding more war in Syria, the same warrior senator who dodged the Vietnam War by joining the National Guard as a lawyer.

The Kurds have been used and betrayed since 1918. They always seem to get the short end of the stick. The old Kurdish saying, "no friends but the mountains," is painfully true. Washington does not want to get involved in a new Kurdish state carved out of Syria or Iraq even though Israel is pushing it hard to further splinter the Mideast. Iraq's and Syria's oil deposits are still a powerful lure for imperial-minded powers.

Trump rightly calls the fracas in Syria "a stupid war." But many pro-war forces play on this tired, confused president who has gotten himself deep into the Syrian morass, a problem of largely American but also Turkish making. Ironically, former president Barack Obama foolishly authorized America's effort to overthrow Syria's Assad government under the guise of a phony civil war. This was one of the few Obama policies that Trump chose to follow. The neophyte president was unwilling or unable to prevent the deep state in Washington from encouraging the war.

The region in question is hardly the beating heart of Syria. It looks large on the map but is mostly desert and scrub, dotted by miserable little villages with Arab or Kurdish populations. Turkey, which has over 2 million Syrian refugees, is eager to begin repatriation of this massive burden created by its policy errors and the western powers.

In the middle is the scattered debris of the short-lived ISIS caliphate. Russia, which is selling Turkey its very capable S-400 anti-aircraft system, is watching with delight as old allies Turkey and the US split.

Even Trump knows how important Turkey is to the NATO alliance. A rupture between Washington and Ankara could see the vital US bases at Incirlik and Adana thrown out of Turkey. That's why Trump needs to tread carefully.

Related Topic(s): Turkey Attacks Syria, Add Tags
Add to My Group(s)
Go To Commenting
The views expressed herein are the sole responsibility of the author and do not necessarily reflect those of this website or its editors.