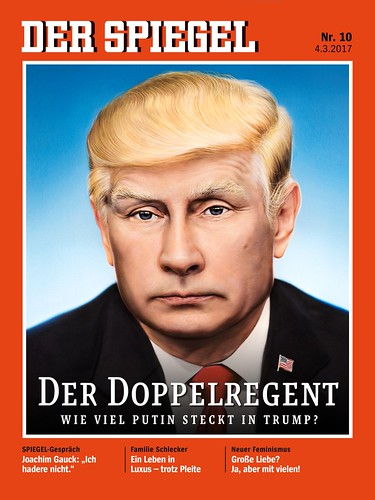 President Trump's embarrassing performance at the Helsinki Summit brings up some disturbing possibilities. Even Republicans have, at least temporarily, voiced a few concerns. Could the TrumpsterFire have finally done something so remarkably bad for our country that even Republicans are moved to criticism? Rebuke?

We all know what governments do when they see danger to their very existence from an individual in power--at home or abroad. The 'A' word comes to mind. However, the GOP has gone all in for this travesty, at least until now. Maybe they are changing. Maybe they are seeing a very real danger. But maybe not. Maybe they see just the opposite. Maybe they are seeing that autocracy is not such a bad thing if they can be in power [i]delivering[/i] the autocracy for the guy in charge. They would certainly be in position to make even more money off their job perverting government.

But any way I look at this, the picture is decidedly bad. If the GOP goes all in and snuffs out our democracy, we lose. If they see it as more of a danger and diss Trump (just in time), then what happens next? Do they actually impeach him? I don't think so. Not the Republicans. Maybe after November's election, but then it would be a case of the GOP crying about it at the hands of the "evil Dems." They could claim whatever position was most favorable to them--a typical response from either party when not in power. But let's stay with the GOP for a moment. If things get totally out of control and they don't want to impeach, what do they do? Of course, they could decide to just mouth off a bit (they briefly started to do this) and then just wait for the election to take the burden off their shoulders. That is what I expect, actually. After all, they have gotten what they really needed from this clownish leader--a Supreme Court pick, and they're closing in on a second one as a bonus. they thought if they could just get a right-leaning court, they could put up with the incompetence and keep the clown in check if he started to further lose touch with reality. What they probably had not counted on was the political connection to him with which they inextricably tied themselves. Now they really need the clown in the midterm elections. Oops!

But after the elections, Republicans (hoping to remain in power) might just wait around for it to end. Having achieved a tax cut for the wealthy and a Supreme Court, they can sit back and relax. But waiting around is certainly not a good option for our country and our democracy, especially at the hands of a leader as dangerous as ours. Waiting around when these kinds of turmoil are in the air has never been a favorable option. Witness , when they decided there wasn't really any viable threat from you-know-who. Fortunately, the election is just 111 days away. But these just could be the most painful 111 days in our nation's history.

What if things do get dramatically worse? What if the GOP decides the danger is finally too great and they don't want to wait anymore? And they don't want to impeach. What then? What government agency is going to see it as their patriotic duty to "change the channel" on this revolving disaster?

CIA operatives come to mind. I know they typically come into play with international figures, but we are talking about Putin pulling the strings, here, aren't we? If they get involved, we will have degenerated our nation down to the level of a banana republic in less than two years' time. We will have done so at the hands of a puppet Congress, under an incompetent president who, himself, is a puppet to a foreign power. All of which could lead us to a violent and very banana-republic end. Figuratively, we may be nearing our nation's second grassy knoll. And to martyr someone so utterly incompetent, so pathetically inept at leadership, would be a travesty. The only question remaining is whether that travesty would be better or worse than the travesty we are currently living through.

Elect a clown; expect a circus. The problem is, the circus is on fire.