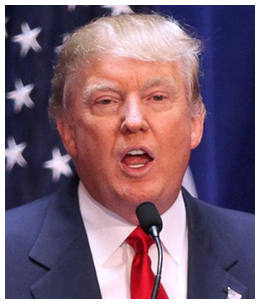 When I read Trump's defenders, such as Daniel Lazare, having to balance their defense with denunciations of Trump, I think the CIA's propaganda is working. In his article, Lazare asks the rhetorical question, "Is a military coup in the works?" He then goes on to describe the CIA and presstitute coup against Trump unfolding before our eyes.

Having described the unprecedented frame-up of the president-elect of the United States by the CIA and the Western media, Lazare has to square himself with those doing the frame-up:

"This is not to say that the so-called President-elect's legitimacy is not open to question. ...Trump is a rightwing blowhard whose absurd babblings about Saudi Arabia, Iran and Yemen reveal a man who is dangerously ignorant about how the world works."

Note that Lazare goes beyond the CIA and the presstitutes by elevating Trump from someone not sufficiently suspicious of Vladimir Putin to "dangerously ignorant." I suppose Lazare means dangerously ignorant like Bill and Hillary Clinton, George W. Bush, and Obama. If this is what Lazare means, why is Trump any less qualified to be president than his three most recent predecessors and his opponent in the election?

Of course, Lazare has no idea what he means. He is simply afraid he will be called a "Trump deplorable," and he stuck in some denunciatory words to ward off his dismissal as just another Russian agent.

At other times I conclude that the CIA is discrediting itself with its fierce and transparently false attack on the president elect. The attack on Trump from the CIA and its media agents at the New York Times, Washington Post, CNN, the network TV channels, the BBC, the Guardian, and every other Western print and TV source with the exception of Fox News, is based on no evidence whatsoever. None of the US 16 intelligence agencies can produce a tiny scrap of evidence. The evidence consists of nothing but constant repetitions of blatant lies fed into the presstitute media by the CIA.

We have witnessed this so many times before: "Tonkin Gulf," "Saddam Hussein's weapons of mass destruction," "Iranian nukes," "Assad's use of chemical weapons," "Russian invasion of Ukraine."

General Smedley Butler, the most decorated Marine in the history of the US military said that he and the US Marines spent their lives defending the interests of the United Fruit Company and some lousy investment of the banks in Latin America. That's all the attack on Trump is about. Trump is saying that "America first" doesn't mean a license for America to rape and plunder other countries.

Normalized relations with Russia removes the orchestrated "Russian threat" justification for the $1,000 billion taxpayer dollars taken annually from ordinary Americans and given to the military/security complex via the federal budget.

Trump's question about the relevance of NATO 25 years after the collapse of NATO's purpose -- the Soviet Union -- threatens the power and position not only of the US military/security complex but also of Washington's European vassals who live high in money and prestige as Washington's servants. All European governments consist of Washington's vassals. They are accustomed to supporting Washington's foreign policy, not having had a policy of their own since World War II.

Trump is taking on a policy world long under the influence of the CIA. Little wonder WikiLeaks' Julian Assange and a number of other clued-in people say that the CIA will assassinate Trump if he cannot be brought into line with a Western alliance organized for the power and profit of the few.

So what is Trump to do?

There are various alternatives. Trump could fire CIA director John Brennan, have the Attorney General indict him for treason, have the FBI locate all participants in the intelligence agencies and presstitute media who aided and abetted the attempted frame-up of the president-elect of the United States and put them all on trial. This would be the best and surest way for Trump to clean out the snakepit that is Washington, D.C. To call a snakepit a "swamp" is to use an euphemism.

Another alternative is for Trump to make the obvious point that despite the allegations of the CIA and the presstitutes, any hacking that occurred was not the fault of Trump and Russia, but the fault of the US intelligence agencies who were too incompetent to prevent it. Trump's trump question to the CIA, NSA, FBI is: So, you know the Russians hacked us and you did not prevent it? If you repeat your incompetence, I am going to fire everyone of you incompetents.

Related Topic(s): CIA; Presstitutes; Trump Presidency, Add Tags
Add to My Group(s)
Go To Commenting
The views expressed herein are the sole responsibility of the author and do not necessarily reflect those of this website or its editors.