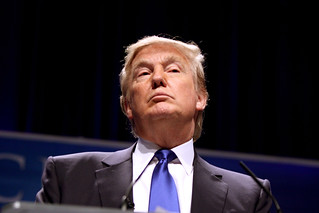 Billionaire Donald Trump, the presumptive Republican presidential nominee, shifted his position on cuts in Social Security and Medicare on the eve of his visit to Capitol Hill for meetings with Republican congressional leaders.

After claiming to reject such cuts throughout the Republican primary campaign--distancing himself from rivals who all backed one or another version of "entitlement reform" -- Trump signaled Wednesday that he was reversing his position.

His top policy adviser Sam Clovis addressed a Washington DC conference hosted by the Peter G. Peterson Foundation, a group established by the billionaire former Nixon cabinet member to push for the dismantling of Medicare, Medicaid and Social Security in the name of cutting the federal budget deficit.

Even attending the conference was something of a signal, given the Peterson group's identification with entitlement spending cuts. Clovis underscored the message, telling the conference, "I think after the administration's been in place, then we will start to take a look at all of the programs, including entitlement programs like Social Security and Medicare."

He added that Trump would not propose any changes in these programs during the election campaign, but wait until a new administration and Congress were elected. At that point, he said, "We'll take a hard look at those to start seeing what we can do in a bipartisan way."

As late as a Republican debate in March, Trump claimed that his economic policies, based on protectionism and trade warfare, would make the United States so rich that no changes would be needed in Social Security or Medicare. He also claimed, in keeping with the nostrums of supply-side economics, that his proposed trillions in tax cuts for the wealthy would cause economic growth to skyrocket, leading to a huge increase in federal tax revenue that would eliminate the federal budget deficit.

Clovis gave a more cautious undertaking to the Peterson group, which has forecast that Trump-sized tax cuts for the wealthy would produce $10 trillion in deficits, not a surplus. The Trump promise not to cut entitlements was conditional on tax cuts producing record economic growth, he said.

"Right now, we're not going to touch anything because we can't predict the growth," Clovis said. "We have to start taking a look not just at Medicare and Social Security but every program we have out there, because the budgetary discipline that we've shown over the last 84 years has been horrible."

Clovis also told the Wall Street Journal in an interview that Trump would support privatization of the Veterans Administration or its transformation into an insurance plan rather than a direct provider of health care services to veterans. "The VA's a broken system now," he said. "We can't continue down that road."

Trump's well-publicized opposition to entitlement cuts, not his racist attacks on Muslims and other immigrants, were a major reason for the coolness towards his candidacy among congressional Republicans. House Speaker Paul Ryan, in particular, has long been identified with sweeping cuts in Medicare which he first proposed in 2011, after the Republican takeover of the House of Representatives installed him as chairman of the House Budget Committee.

Ryan has repeatedly pushed through budget resolutions in which privatization of Medicare, through converting it into a voucher program, was the centerpiece of massive cuts in federal spending on the entitlement program.

Trump not only criticized the Ryan budgets, he blamed them for the defeat of the Republican presidential campaign in 2012, when Ryan was on the ticket as Mitt Romney's vice-presidential running mate.

Ryan's declaration last week that he was "not there yet" in terms of an endorsement of Trump as the presumptive Republican nominee was aimed at securing assurances from Trump that his opposition to entitlement cuts was purely an electoral ploy, to be scrapped as soon as the votes are counted. Clovis's appearance at the Peterson conference constituted such an assurance.

These maneuvers ensured that Thursday's round of meetings on Capitol Hill between Trump and Republican congressional leaders would go smoothly. Trump and Ryan issued a joint statement that is remarkable for its cynical and reactionary character.

"While we were honest about our few differences, we recognize that there are also many important areas of common ground," Trump and Ryan said. "We will be having additional discussions, but remain confident there's a great opportunity to unify our party and win this fall, and we are totally committed to working together to achieve that goal."

Patrick Martin writes for the World Socialist Website (wsws.org), a forum for socialist ideas & analysis & published by the International Committee of the Fourth International (ICFI).
Related Topic(s): Economics; Medicaid; Medicare; Republican; Social Security Cuts, Add Tags
Add to My Group(s)
Go To Commenting
The views expressed herein are the sole responsibility of the author and do not necessarily reflect those of this website or its editors.