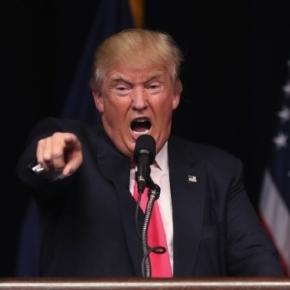 This past weekend felt like August 1974. Everyone knew Richard Nixon was toast. We didn't know exactly how or exactly when he'd be forced out. But we knew it was coming.

After a video/audio recording of a 2005 "Access Hollywood" open mic of Donald Trump sharing his reality TV update of the medieval droit de seigneur surfaced on Friday before Sunday's big second presidential debate, dozens of Republican lawmakers and senior officials abandoned ship. All that remained, it seemed, was a Trumpian version of the GOP bigwigs who trudged to the White House in '74 to deliver the news that Dirty Donny could no longer count on Republican support in Congress.

Calling for the mass expulsion of 11 million people didn't finish Trump. Demanding that Muslims be banned from entering the United States didn't do it. Encouraging supporters to beat up protesters didn't do it. Making fun of John McCain for being captured didn't do it. Bragging that he likes to grab women "by the p*ssy" -- that, of all things, was his Waterloo.

The reason Trump is still in the race, merely wounded and behind (rather than humiliated and out), is important to note. This novice politician understands media better than anyone else.

Normally, we'd expect the election to be a referendum on Hillary Clinton and by extension President Obama. She's the incumbent effectively running for a third term of the same policies. Instead, everyone is talking about Donald Trump -- his fitness or lack thereof, his authenticity or lack thereof, his sanity or lack thereof. The reason is simple: Hillary Clinton delivers a cut-and-paste stump speech at every appearance (except for those to Wall Street, where she likes to share her "private position"). Trump, meanwhile, performs jazz. He extemporizes. No one, including him, knows what he's going to say. So every rally gets covered live. How can she compete?

Throughout the campaign, Trump has neutralized the outrage over each of his scandalous utterances by supplanting it with a new one. The media, always lazy and now shorthanded, can't keep up. And each one makes him the center of the conversation.

Flooding the zone was the risky but brilliant tactic that Donald Trump, who seemed to be mortally wounded on Friday afternoon, deployed a couple hours before the debate. He called a press conference announcing that he had invited four women who have spent years at war with the Clintons over allegations of sexual harassment, rape and making light of her legal defense of a rapist to attend the debate.

I don't blame the women for allowing themselves to be used this way. They've been marginalized and ridiculed, their stories never taken seriously by the news media. Tacky publicity is better than obscurity.

From a political standpoint, however, I thought it would be widely perceived as a cheap and disgusting Hail Mary pass by a desperate candidate hours away from being forced out of the race. Boy, was I wrong.

Thirty minutes into the debate, the megastory of the election season had been reduced to one of numerous issues, washed away by Trump's exercise of a nuclear option. Back to normalish: Hillary Clinton was on the defensive over her emails.

Hillary Clinton was in an impossible position. In politics, the cliche' goes, when you are playing defense, you are losing. So she refused to defend herself or her husband. For viewers, however, the effect was to leave Trump's "I may say bad things about women, but my opponent does bad things to them" argument unchallenged.

If this real estate thing doesn't work out, Donald Trump can market himself as the brain behind the deftest crisis response in political history. I'm still reeling.

Related Topic(s): Debate; Donald Trump; Politics; Politics Of Hate, Add Tags
Add to My Group(s)
Go To Commenting
The views expressed herein are the sole responsibility of the author and do not necessarily reflect those of this website or its editors.