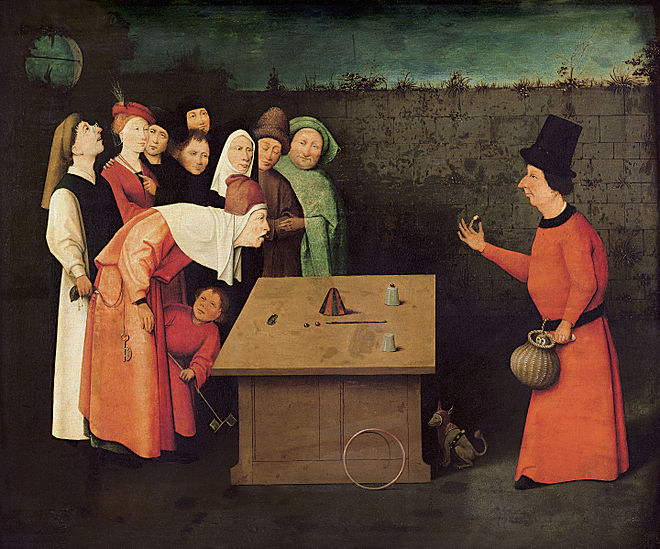 Hieronymus Bosch. They did it back then, too.
(Image by Wikipedia (commons.wikimedia.org), Author: Author Not Given)   Details   Source   DMCA

Trump's "Box of Six Magic Tricks" is a topic on which I have written on several previous occasions. Since then, much has happened to Trump and the Constitutional Democracy of the U.S. nation that he continues to be in the process of destroying, in part by using them. So, I thought that it would be worth a revisit to the subject.

For an introduction to the topic, as I said previously:

"As we all know, Donald Trump has led a charmed life. There are six factors/elements/-components of what I call his 'Box of Magic Tricks,' personal and procedural, which have created this route to a charmed life for him. They are not actually magical, but very real. I call them 'magic' because they have worked for him, over-and-over again in ways that to the outside observer can seem to be magical. He has said to himself, over-and-over again, 'this is going to work for me, I can make this work for me, this must work for me' regardless of what the objective reality is, regardless of how very few, if any other, folk could make them work in the same circumstances. And so, in a sense, that is magical.

Although neither Trump nor very many of his political allies or his ruling class supporters are conscious of the Six Tricks, they have existed, do exist and have worked for him, over-and-over again. They have protected him, and indeed have saved him, from situations one after another, from his childhood onwards, which for others in the same boat would have spelled disaster.

But one or more of them may (and I say may) finally be coming unraveled. This column explains what they are and why that unraveling might be happening. But, and this is a big BUT, because he has wiggled out of so many seemingly impossible situations in the past (e.g., the Atlantic City casinos bankruptcy fiasco) I even say might be unravelling with great care.

First, here are the tricks. A simple list it is:

2. For decades he has had a standard operating procedure when he faces an adversary of any kind. He learned it from Roy Cohn (who learned it from Joseph McCarthy): Always attack; Never defend.

4. In the whole of his business life, Trump has never been responsible to anyone else, either above, or even alongside, himself.

5. Trump has lived his life surrounded by enemies, whether in business, in his personal life, in his banking and financial life, certainly in politics and not just now. Sometimes they were real. Sometimes they were imagined. Trump has always seen anybody who has opposed him on any subject, at any level of intensity, not as an adversary to be dealt with, but as an enemy. Indeed, as its ghost-writer Tony Schwartz told us in Trump's book "The Art of the Deal," the art has not been about deal-making, but rather about opponent-crushing.

6. Trump is history's greatest con man. Yes, even the famous P.T. Barnum or the equally famous Charles Ponzi or the not quite-as-famous Bernie Madoff pale beside him. I will not detail it further here because I have devoted a whole column to the subject. As I said at its beginning (with modifications in italics):

"A variety of words have been used to describe Donald Trump and Trump's White House/Presidency. They are being used with increasing frequency as various 'inside the White House' books, like those of Bob Woodward and Michael Wolff, and 'pretty close to Trump' books, have come out and have continued to come, indeed to pour, out, since the end of his Presidency. Among appellations are: 'deranged,' 'unhinged,' 'chaotic,' 'crazy,' 'bordering on senile,' and 'mad."' Trump is often described as 'uncontrolled and uncontrollable.' Now it may be true that he is really off-the-wall doing a combination of meandering through and charging through his Presidency without much direction other than 'responding to his base.' Certainly, from time-to-time I have thought so. But the more I have watched what this man has actually accomplished, the less I think that he is just lurching through it all, and the more I think that he knows exactly what he is doing (at least most of the time)."

Steven Jonas, MD, MPH, MS is a Professor Emeritus of Preventive Medicine at StonyBrookMedicine (NY) and author/co-author/editor/co-editor of over 35 books. In addition to his position on OpEdNews as a "Trusted Author," he is a Senior Editor, (more...)
Related Topic(s): Magic; Trump; Trump Against Democracy; Trump And Saudi Arabia; Trump Attemts To Void Election; Trump Broken Promises; Trump Con; Trump Fake News; Trump Fascist; Trump Liar In Chief; (more...) Trump Racist; Trump Steals Election; Trump The Fascist, Add Tags  (less...)
Add to My Group(s)
Go To Commenting
The views expressed herein are the sole responsibility of the author and do not necessarily reflect those of this website or its editors.