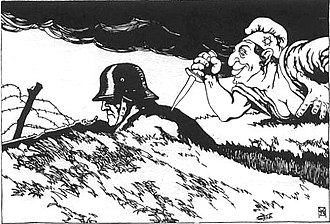 In the Spring of 1918, the Prussian Army launched what proved to be its last major offensive on the Western Front in Europe. It happened that since the occurrence of the Russian Revolution on October 25, 1917 [November 7, new calendar] and the subsequent departure of Russia from The Great War, Germany faced only one front. But even that eventuality proved to be too much for an exhausted, way under-fed army which at times had to stop fighting to forage for its own food. The offensive failed. Also, the British naval blockade had been proving to be increasingly effective in depriving Germany of both military and civilian goods, as well as food. And so, the Prussian government began the negotiations with the Western Powers that eventually led to the Armistice of November 11, 1918, and then after that to the Versailles Treaty, which proved to be so disastrous for the whole of Europe, in the long run.

However, the two leading commanders of the Prussian Army, Generals Paul von Hindenburg (later the Weimar Republic President who appointed Adolf Hitler as Chancellor on January 30, 1933) and Erich Ludendorff (who was a Hitler supporter from the mid-1920s), did not like the movement to end the war. They thought that somehow Germany could fight on and did not do so only because the civilian government was weak-kneed and had thus decided to implement the policy to bring the War to an end. That the civilian government, especially the Social Democratic Party that was part of it, undertook this policy, after the War, and especially after the imposition the onerous Versailles Treaty, that surrender policy came to called, by the German Right, the "Stab in the Back." It was used, over-and-over again, to justify the development of various right-wing parties in Weimar Germany, most especially the Nazi Party. Hitler and Goebbels were still using the phrase in speeches in the 1930s.

As everybody in the United States and indeed around the world who has any interest in the U.S. Presidential elections knows, Donald Trump, at the end of the last Presidential debate, on October 22, 2020, said that he would not necessarily accept the result of the vote on November 3. If he thought that "something was going on" (a phrase that he uses constantly to describe supposed conspiracies of all sorts [of course without defining them, much less proving their existence]), he would not do so. Since the election and his surrogates have been ever-more fiercely the claim that the election was somehow "rigged," by the media, by the Courts, by voting machine manufacturers, by various vote-counters, and etc. to create massive voter fraud, by the millions. This fraud, of course, occurred only in "certain neighborhoods," "you know which ones I'm talking about."

As I said above, I believe that Trump will be using the false charge of a "rigged election," along with the "media/Hillary conspiracy to savage him," as his "Stab in the Back." I think that the appointment of Breitbart's Steve Bannon is part of the development of this strategy. In Trump's view (whether he truly believes that he was stabbed in the back or not, and given how he seems to think, he may very well truly believe it) he is THE one who can save the United States from all of its enemies, at home and abroad.

Once having let himself loose of the Repub. Party, he will be able to openly align with the Far Right, including its openly racist, xenophobic, and anti-Semitic elements. (Trump's Jews will have a problem with that one, but in the Nazis' early days, there were Jews for Hitler, in an organization called the Association of German National Jews.) In the beginning, the new party will likely be more like Sir Oswald Mosely's pre-World War II British Union of Fascists. But it could develop into a national political party ready to contest elections. And in three-way races, it could conceivably win in certain areas. Trump right now seems stuck at around 39-48% of the vote. But it is useful to recall that Hitler and the National Socialist German Workers Party (clever name, eh wot?) never got more than 37% of the vote in a free election. Also, there will eventually be an armed uniformed militia in those states where the gun laws are so loose that they can be established. Can you say "Sturmabteilung," or "Brown Shirts?" After all, in certain "open carry" states armed Trump supporters were already showing up at his

This is truly scary stuff folks, but in my view, it is all part of his long-range plan, of which the "rigged election," the U.S. "Stab in the Back" for the 21st century, is a central piece.

Post-script: Doesn't this all sound familiar, sort of a general description of part of what is going on with Trump and the Trumpites now? Well it should. Because it is. But what is particularly interesting about the particular piece of text above is that almost all of it is drawn from a column that I originally published on the The Greanville Post on October 24, 2016 (changing just a few details so as not to give the game away). Am I posting it now to show how foresightful I was? No. I am posting it now to show how Trump just doesn't change. He and his team thought that he was going to lose in 2016 (and if it hadn't had been for Jim Comey, he most likely would have) and he was preparing, guess what? A campaign to contest the election based on "they cheated" (the charge of course based-in-the-doctrine-of-white-supremacy), by artificially pouring "all those black votes that had to be illegitimate" into the electoral counts. Just as in 2020, when of course he really did lose. You can see my original "Rigged Election" 2016 column here: Click Here.

Today (February 1, 2021) The New York Times published an extensive and very important revelation of just how much planning went on in the Trump camp a) in support of the "stolen election" fiction this time around, and b) in support of what eventually became the January 6, Insurrection, whether or not Trump and his team were directly involved in its development. Yes indeed, Trump doesn't change much. Even though in the end he didn't have to do it in 2016, just as in golf, once a cheater, always a cheater.

Steven Jonas, MD, MPH, MS is a Professor Emeritus of Preventive Medicine at StonyBrookMedicine (NY) and author/co-author/editor/co-editor of over 35 books. In addition to his position on OpEdNews as a "Trusted Author," he is a Senior Editor, (more...)
Related Topic(s): Conspiracy; Racism; Rigged Elections; Trump; Trump Against Democracy; Trump Apologists; Trump Attemts To Void Election; Trump Liar In Chief; Trump Loser; Trump Racism; (more...) Trump Racist; Trumpism; Voting, Add Tags  (less...)
Add to My Group(s)
Go To Commenting
The views expressed herein are the sole responsibility of the author and do not necessarily reflect those of this website or its editors.