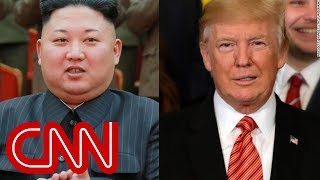 On Tuesday I wrote, "The ball is in US court for direct talks with North Korea", OPEDNEWS.

Little did I know at the time North Korean leader Kim Jong-un would "invite" President Trump to meet face to face within the next two months.

But that's exactly what's happened. The invitation had been presented to the two South Korean envoys who met directly with Kim in their bilateral talks concluded on Monday. The envoys were then dispatched by South Korean President Moon Jae-in to Washington to meet with Trump and convey the details of their meeting with Kim.

So today it was revealed Trump accepted Kim's invitation.

To say the least Kim's invitation and Trump accepting immediately upon hearing it came as a complete surprise but that fits perfectly with Trump's unpredictable nature.

To be sure we'll now hear the pundits, think tank "experts", MSM outlet all weighing in with their own prognostications forecasting, bemoaning, screeching what they believe will be the result of that meeting.

Well I wouldn't put much stock in what any of them has to say. None of them foresaw Kim's invitation to Trump and nobody could predict Trump so easily accepting it.

We're in uncharted territory as far as Trump is concerned. That may also be with Kim but I doubt it. That's because unless Trump goes on the record guaranteeing the US won't invade North Korea and overthrow the North Korean regime Kim isn't about to relinquish his nuclear weapons as they're the only deterrent that's prevented the US from initiating a new war on the North.

The South Korean envoys did say after their meeting with Kim, "The North Korean side clearly stated its willingness to denuclearize. It made clear that it would have no reason to keep nuclear weapons if the military threat to the North was eliminated and its security guaranteed."

For what it's worth here is my two cents. I believe a final peace treaty could be signed between Kim and Trump officially ending that long ago Korean war. That would be a good first step in their negotiations. It's something the North has wanted for decades but the US has never been willing to meet with North Korea and sign a peace treaty.

Secondly, with a peace treaty in hand that would immediately confer "legitimacy" on North Korea-particularly in the eyes of the West-leading to the next step of North Korean denuclearization and the US guaranteeing the North's security and ending the military threat.

But really...can anyone know beforehand what Trump will actually do? Who knows maybe the "Donald" will dumbfound everyone and pull off what no other US president has been able to do end the insane confrontation with North Korea and pull back from the brink of nuclear war. Here's hoping he does.

Retired. The author of "DECEIT AND EXCESS IN AMERICA, HOW THE MONEYED INTERESTS HAVE STOLEN AMERICA AND HOW WE CAN GET IT BACK", Authorhouse, 2009
Related Topic(s): Invitation; Negotiation; North Korea; North Korea And South Korea Talks; Trump Diplomacy, Add Tags
Add to My Group(s)
Go To Commenting
The views expressed herein are the sole responsibility of the author and do not necessarily reflect those of this website or its editors.