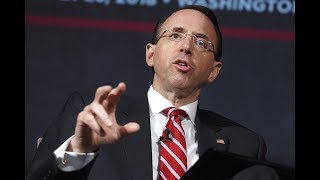 Does Deputy Attorney General Rod Rosenstein's indictment of 12 Russian military intelligence officers for allegedly hacking Hillary's emails and interfering in the US election have any purpose other than to throw a monkey wrench in President Trump's upcoming summit with Putin?

Don't forget that Rosenstein is implicated in the orchestration of Russiagate as a weapon against Trump, a weapon that serves the interests of the Democratic Party and the military/security complex about which President Eisenhower warned us 56 years ago to no avail. Rosenstein's indictment of 12 Russians for allegedly hacking computers is a political indictment aimed at President Trump. The indictment is otherwise pointless, as the Russian government will certainly not turn over its military personnel to a Washington kangaroo court. The indictment serves no purpose except to poison the atmosphere of the summit.

If you read the indictment, you will see that it consists of nothing but improbable accusations. There is no way on earth that the US Justice (sic) Department would be able to acquire the information in this fictional story that Rosenstein has presented. Moreover, there is no sign whatsoever of any evidence in the indictment. Rosenstein knows that he needs no evidence, because the accused will never be brought to trial.

Rosenstein has thrown red meat to the presstitutes, who are assets of the military/security complex and Democratic Party, and the presstitutes will pressure the Republicans to get behind Rosenstein's call for a united front against Russian interference. You can imagine what would happen if Trump and Putin were to have a successful summit and normalize the relations that Washington ruined between the two countries. If your imagination is not working, consult here.

During the presidential election campaign, I pointed out that Trump was not Washington savvy, did not know who would support his positions, which were antithetical to the interests of powerful interest groups such as the military-security complex and global offshoring corporations, and that Trump ran the risk of being destroyed by his own appointments.

Rod Rosenstein is a Trump appointment. Moreover when Trump's Attorney General ordered Rosenstein's resignation, Trump refused to accept it and kept Rosenstein in office. Trump's miscalculation is so enormously wrong that he deserves the knife in the back that Rosenstein just delivered.

There is an alternative to the explanation above. The alternative is that Trump, being a bully, was convinced by those in his administration, who most certainly do not want any normalization with Russia, that the indictment would put Putin on the spot and give Trump the advantage in the bullying arena. I can hear the CIA and John Bolton telling Trump that the indictment would put Putin on the defensive and permit Trump to pressure him into a summit outcome favorable to Washington's hegemony.

This is a clever way of setting Trump up for failure in his meeting with Putin that could possibly poison the relations between the countries ever further without the failure being blamed on Rosenstein. Thus, Rosenstein's position as Trump's political assassin would not be threatened. He would still be running Russiagate with a recused Jeff Sessions sitting there useless.

Professor Stephen Cohen is a premier expert on US/Russian elections. His considered view is compatible with mine.

Related Topic(s): Deputy Attorney General Rod Rosenstein; Indictments; Russiagate; Trump And Putin, Add Tags
Add to My Group(s)
Go To Commenting
The views expressed herein are the sole responsibility of the author and do not necessarily reflect those of this website or its editors.