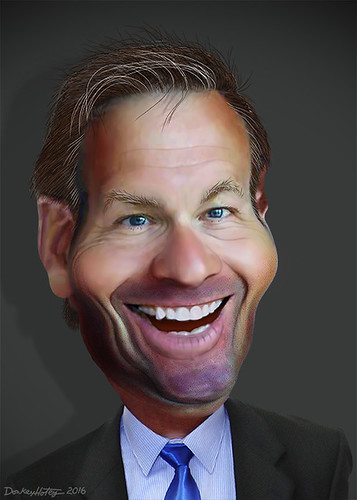 Kris Kobach is the GOP mastermind behind a secretive system that purged 1.1 million Americans from the voter rolls.

Kris Kobach was spooning down vanilla ice cream when I showed him the thick pages of evidence documenting his detailed plan to rig the presidential election of 2016. The Kansas secretary of state, sucking up carbs at a Republican Party fundraiser, recognized the documents and ran for it while still trying to wolf down the last spoonful.That was 2015 (yes, the ballot heist started way back). Today this same man, Kris Kobach, is Donald Trump's choice to head the new "Voter Integrity Commission."

That was 2015 (yes, the ballot heist started way back). Today this same man, Kris Kobach, is Donald Trump's choice to head the new "Voter Integrity Commission."

It's like appointing Al Capone to investigate the mob.

How did Kobach mess with the 2016 vote? Let me count the ways--as I have over the past three years of hunting down Kobach's ballot-box gaming. Just two of Kobach's vote-bending tricks undoubtedly won Michigan for Trump and contributed to his "wins" in Ohio, North Carolina and Arizona.

Kobach is the GOP mastermind behind this secretive system, which purged 1.1 million Americans from the voter rolls.

When Trump said, "This election's rigged," the press ignored the second part of his statement: "People are voting many, many times." Trump cited three million votes illegally cast.

The White House said Trump got this information from Kobach. Indeed, it specifically comes from a list of 7 million names--or as Kobach describes it, a list of 3.5 million "potential double voters."

How did Kobach find these three million double voters? He matched their names, first and last. That's it.

Here's an unedited screenshot of a segment of his list:

James Edward Harris Jr. of Richmond, Virginia, is supposed to be the same voter as James R. Harris (no Jr.) of Indianapolis, Indiana. Really? Note that not one middle name matches.

And here's the ugly part. Both James Harrises (in fact, hundreds of them) are subject to getting scrubbed off the voter rolls.

Greg Palastâ€™s investigative reports appear in Rolling Stone, the Guardian and on BBC Television. His latest film, The Best Democracy Money Can Buy, on how Donald Trump stole the 2016 election, is available on Amazon. Palast is Patron of the (more...)
Related Topic(s): Voter Disenfranchisement; Voter ID Laws; Voter Rolls Purged, Add Tags
Add to My Group(s)
Go To Commenting
The views expressed herein are the sole responsibility of the author and do not necessarily reflect those of this website or its editors.