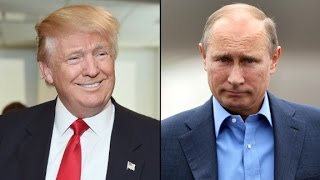 For the last month, Saudi Arabia has been flooding the market with crude oil to force Russia to agree to deep production cuts. To his credit, Putin has stubbornly resisted Saudi coercion and maintained current output levels. As a result, prices have plummeted to an 18-year low of $20.09 per barrel, which is well below the break-even rate that American frackers need to survive. In less than a month, the capital-intensive US shale oil industry has gone into a steep nosedive that has set off alarms on Wall Street where analysts expect that a wave of defaults will deliver a knockout blow to the big investment banks. That's why Trump decided to call Putin. He wants to see if he can persuade the Russian president into slashing production.

It's worth noting, that Putin remained stoically silent when the Trump administration imposed economic sanctions on Russia for its alleged activities in Ukraine. Nor did the Russian president complain about Washington's meddling in Syria or its attempts to block Russia's pipelines to Germany and Bulgaria. (Nordstream and Southstream) But now that the shoe is on the other foot and US business interests are being hurt, Trump thinks nothing of calling Moscow for help. As one critic said, "It looks like the Trump team can dish it out, but it can't take it."

The phone call has gotten almost no coverage in the American media, which is to be expected since there's no way to spin an incident in which an American president is clearly pleading to "evil" Putin for a favor. The Russian state media, Tass, summarized the phone call in a terse 3-sentence statement that excluded any useful background. Here's an excerpt:

"The leaders discussed also the current status of the world's oil market. "An arrangement was made on Russian-US consultations in this regard through energy department heads," the Kremlin said. "Vladimir Putin and Donald Trump agreed to continue personal contacts." (Tass)

Notice how the report in Tass forgoes the baseless allegations and recriminations that typically appear in the western media. Given the deluge of "Russian meddling" disinformation that has dominated the headlines for the last three years, you'd think the editors at Tass might be more critical of Trump's gesture, after all, Trump's phone call strongly suggests that Washington is ready to cave in to its "mortal enemy" provided it gets the production cuts it wants. It seems like Tass might want to offer an opinion about that, especially since the MSM has taken such a hostile approach to all-things-Russian. Apparently, not everyone uses their media to push their own narrow political agenda.

Some readers might recall how Trump scolded Putin in Helsinki in 2018 for pushing oil prices higher ($85 per barrel) which Trump claimed was hurting growth in the US. Not surprisingly, Trump had his facts wrong. The reason prices rose in 2018 was because the Trump administration clapped harsh economic sanctions on both Iran and Venezuela, which caused an immediate decline in production followed by a sharp rise in prices. The US also supported the attack on Libya also contributed to the spike in prices. Bottom line: Russia was no more responsible for the high prices in 2018 than it is for the low prices today.

In 2018 the problem was US sanctions that choked off supply, while in 2020 the problem is the Saudis. It's the Saudis that increased production not Russia. That doesn't mean that Putin can't help to ease the situation, but it does mean that the two leaders will have to air their differences candidly and find a constructive way to move forward. That means there needs to be a summit which, to this point, has been strenuously opposed by the U.S. foreign policy establishment.

In any event, it's extremely unlikely that Putin will agree to reduce oil production in exchange for the lifting of economic sanctions. That's not what he wants at all. What Putin wants from Washington is far more comprehensive. He wants the US to rejoin the community of nations so they can deal collaboratively on critical issues like war, pandemic, nuclear proliferation and global security. He wants a reliable partner that will play by the rules, comply with international law, stop the bloody regime change wars, respect the sovereignty of other nations, and lend a hand with global crises.

That's what he wants. He wants an ally that will respect the interests of others, cooperate on issues of mutual importance, and work to create a more equitable and prosperous global economy.

If Trump shows he is willing to change, then Putin will undoubtedly make every effort to help out. But if Trump continues with America's go-it-alone approach, there's not going to be a deal.

Related Topic(s): Oil; Sanctions; Trump And Putin; Trump Foreign Policy, Add Tags
Add to My Group(s)
Go To Commenting
The views expressed herein are the sole responsibility of the author and do not necessarily reflect those of this website or its editors.