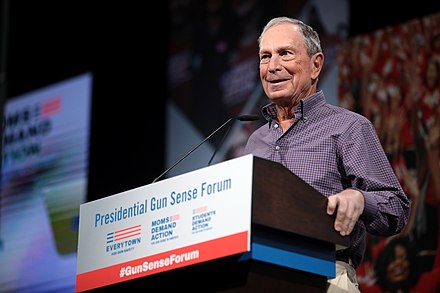 Between Bernie Sanders, Elizabeth Warren and Tulsi Gabbard the progressives are leading the pack in the Democratic presidential primary. Joe Biden's lead has been, as predicted, shrinking or, in early primary states, disappearing. And Centrist, top-down, authoritarian, corporatist, neoliberal Democrats are sh*tting their pants.

Based on my local experience with a multi millionaire running for office, I expect that there will be a significant portion of the Democratic party voters who will rush to embrace Bloomberg because he is wealthy and they think he'll be able to self-fund his own campaign. And they'll see his success as a businessman and mayor as an indication that he can win against Trump. I see these people as authoritarians-- the people who seek out people to tell them what to do, who they can hand over the responsibility to make decisions.

That approach, in my local situation panned out badly. The Democratic leadership endorsed the millionaire, sabotaging the primary and he ended up losing in the general. I believe one of his competitors, a young female veteran, attorney and new mother could have won. The millionaire was not a bad guy. He'd been a generous donor to progressive causes, but that panned out to work against him because an independent group supporting his Republican opponent attacked him with very effective ads, for funding Democracy Now, which had given Mumia airtime. it's very likely that Mike Bloomberg has done the same thing-- good, liberal funding that plays terribly in Michigan, Ohio, Pennsylvania, Florida and Wisconsin.

I fear that centrist, moderate Democrats-- the people who believe that nothing bold can be accomplished-- I call them can't-doists-- will embrace Bloomberg and, with Warren and Sanders close to tied going into the convention, will use the Superdelegates, to hand the election to Bloomberg.

I'm pretty sure that Baby Boomers, will become a big bloc of Bloomberg voters, to my embarrassment, being one myself.

I'm also predicting, as are many others, that a Bloomberg entry into the race will kill Joe Biden's chances and probably also hurt the other centrists in the race-- Buttagieg, Klobuchar, Booker, Harris and Yang.

It's interesting that not one mainstream talking head has mentioned that when Bloomberg enters the race in 2020 he will be 78 years old, the same age as Bernie Sanders.

Bloomberg has refused donations and totally self-funded his past campaigns, spending five times what his competitors raised. He will not have a million or two million donor supporters. He will be running the ultimate top-down campaign. This bodes badly for the future of democracy. The future needs people who bring people together, who engage the power of the people. Even if Bloomberg has the best intentions, he will be setting up a precedent that is designed for authoritarian control. It is dangerous and irresponsible.

And be assured, Bloomberg is doing this with the encouragement of high level leadership in the Democratic party.

Related Topic(s): 2020 Democratic Primary; Authoritarian Personality; Authoritarianism; Centrist Centrism; Centrist-Moderate; Michael Bloomberg, Add Tags
Add to My Group(s)
Go To Commenting
The views expressed herein are the sole responsibility of the author and do not necessarily reflect those of this website or its editors.