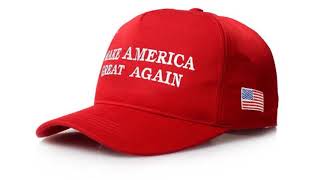 During May and June, while my wife was diligently doing research at the Folger Shakespeare Library just a couple of blocks from the US Capitol, and I was grading students' papers, I took quite a few walks around Capitol Hill. This area is truly a national treasure, particularly the Smithsonian museums and the beautiful memorials to great Americans including those many who have fallen in defense of this nation. But there is something new that I have noticed increasingly cropping up on the Mall, in front of the Capitol, and, yes, in the Food Court at Union Station. There are groups after groups of people many of whom are wearing the same type of red baseball cap with the words "Make America Great Again" emblazoned on it.

Now everyone of us who was lucky enough to visit Washington DC in our youth wanted to come home with a souvenir or two: maybe a t-shirt saying "Ask not what your country can do for you" or a mug with the words "Mr. Gorbachev, tear down this wall!" What I have never seen before, however, is the uniformity of the people wearing one souvenir, this one type of baseball cap. There may be isolated exceptions, but almost invariably, the student groups in which so many are wearing one of these red caps are composed of teenagers, all white and virtually all male. When I see groups of people including African-Americans, Latinos, or a mixture of different ethnic and racial identities, there are no red hats, at least not Donald Trump's trademark cap.

So assuming each of these kids is wearing the cap of his own free will (one can only hope), why do they like it enough to buy it and wear it? Maybe it is nothing but the latest fad, understandably so given the underdog, unexpected, and unconventional nature of the Trump victory. I certainly recall the appeal of standing up to authority or conventional wisdom at that age and each generation is prone to and even entitled to such attractions. But I fear this phenomenon goes beyond this. What do the words "Make America Great Again" mean to these young people? Not only is there the implicit assumption that America is no longer "great" in some sense that it once was, there is the underlying question of what made or makes America great. Is it superior natural resources, the strongest military, the biggest economy? We have to hope that these hat-wearers understand the foundational principles that also make this country great -- free speech to be sure, but also aspirations for equal opportunity, non-discrimination, and justice for all, along with a spirit that we are all, regardless of our background or how we look, in this together.

These principles seem woefully and intentionally lacking from Donald Trump's appeal. Whether it be blatant encouragement of racist groups, ruthless exploitation of anti-immigrant sentiment, reckless disregard for our federal law enforcement agencies, flippant disrespect for carefully nurtured international relationships, or simply rude and relentlessly self-centered conduct, displaying his slogan glorifies things that do anything but make us great.

After the impeachment and resignation of President Nixon, President Gerald R. Ford declared that "Our long national nightmare is over." If Trumpmania takes permanent root among so many of our new generation, our current national nightmare may have just begun. Trump and his cruel and divisive politics must be clearly repudiated both electorally and culturally. Having lived through Watergate and Richard Nixon's desecration of the White House, I note that no teenagers over the years have been touring the Hill with "Nixon's the One" baseball caps.

That's because bi-partisan and non-partisan consensus developed to terminate a Presidency that threatened the rule of law and diminished our greatness. At that moment, our system showed how it could respond to a genuine internal threat. At this moment, it must again so that these thousands of red caps will be voluntarily but steadily removed as the country comes to its senses. There is a place on Capitol Hill at the Smithsonian National Museum of American History for a few of them, however, so future generations can learn of how a serious threat to our true greatness was stopped in its tracks and consigned to the past.

Related Topic(s): America; Capitol Hill; Donald Trump Ego; Make America Great Again Cap; Threat, Add Tags
Add to My Group(s)
Go To Commenting
The views expressed herein are the sole responsibility of the author and do not necessarily reflect those of this website or its editors.