Newsroom layoffs at the New York Daily News and papers nationwide remind us that things are going from bad to worse. 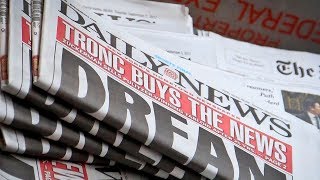 Every once in a while we still hear the bizarre claim that this is a good, or at least adventurous, time for journalism -- that this moment of chaos and change, of Trump tweets and investigations, is in some mysterious way healthy for the craft that is supposed to comfort the afflicted and afflict the comfortable.

The optimism is appealing. But the theory is scorchingly false. Journalism is more necessary than ever at a time when the president of the United States treats media outlets as punching bags. Yet, in a country where even the billionaire-sustained Washington Post acknowledges that "Democracy Dies in Darkness," the necessary sense of urgency is sorely missing.

People who care about the future of journalism need to recognize that the clock is ticking rapidly toward midnight. The Post's slogan represents a vaguely poetic embrace of a truth that's as American as the freedom of the press protection in the Bill of Rights: independent, questioning, and challenging journalism is essential to self-governance.

Unfortunately, a line from Bob Dylan's "Knockin' on Heaven's Door" serves as a more genuinely poetic expression of the truth of journalism's current circumstance: "It's getting dark, too dark to see."

Some may point to the baseline functioning of the Post and The New York Times, or the busy chattering of the cable TV channels, and suggest that these are good times for journalists and journalism. But the journalism that matters most, journalism that tells the stories of where we live and who we are, and which might arm us to be the governors of our own cities and states (and the nation that extends from them), is dying.

We got a harsh reminder of this reality Monday, when Tronc, the ridiculous excuse for a media company that owns a number of the nation's larger metropolitan dailies, laid off half of the editorial staff of the once-magnificent and still exceptionally necessary New York Daily News.

Related Topic(s): Journalism; Layoffs; Media; Newspapers; The Worst Of Times, Add Tags
Add to My Group(s)
Go To Commenting
The views expressed herein are the sole responsibility of the author and do not necessarily reflect those of this website or its editors.