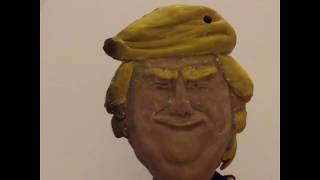 There is a new cowboy in town--Liltrump--a gunslinger that's gonna take down all the corrupt politicians and fake news.
(Image by YouTube, Channel: Lil Trump)   Details   DMCA

The news is all about manipulating the context of stories. The thinner the context, the thinner the mind must become to accept it. If you want to visualize this, imagine a rectangular solid. The news covers the top surface. Therefore, the mind is trained to work in only two dimensions. Then it can't fathom depth, and it certainly can't appreciate the fact that the whole rectangular solid moves through time, the fourth dimension.

Focus on the network evening news. This is where the staging is done well.

First, we have the studio image itself, the colors in foreground and background, the blend of restful and charged hues. The anchor and his/her smooth style.

Then we have the shifting of venue from the studio to reporters in the field, demonstrating the reach of coverage: the planet. As if this equals authenticity.

Actually, those reporters in the field rarely dig up information on location. A correspondent standing on a rooftop in Cairo could just as well be positioned in a bathroom in a Las Vegas McDonald's. His report would be identical.

The managing editor, usually the elite news anchor, chooses the stories to cover and has the final word on their sequence.

The anchor goes on the air: "Our top story tonight, more signs of gridlock today on Capitol Hill, as legislators walked out of a session on federal budget negotiations..."

The viewer fills in the context for the story: "Oh yes, the government. Gridlock is bad. Just like traffic on the I-5. A bad thing. We want the government to get something done, but they aren't. These people are always arguing with each other. They don't agree. They're in conflict. Yes, conflict, just like on the cop shows."

The anchor: "The Chinese government reports the new flu epidemic has spread to three provinces. Forty-two people have already died, and nearly a hundred are hospitalized..."

The viewer again supplies context, such as it is: "Flu. Dangerous. Epidemic. Could it arrive here? Get my flu shot."

The anchor: "A new university study states that gun owners often stock up on weapons and ammunition..."

The viewer: "People with guns. Why do they need a dozen weapons? I don't need a gun. The police have guns. Could I kill somebody if he broke into the house?"

The anchor: "Doctors at Yale University have made a discovery that could lead to new treatments in the battle against autism..."

Related Topic(s): News And Media; News Corporation; Survival; Trump Idiot-in-chief, Add Tags
Add to My Group(s)
Go To Commenting
The views expressed herein are the sole responsibility of the author and do not necessarily reflect those of this website or its editors.