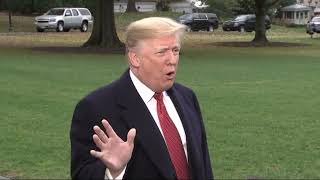 Trump: Acting AG Whitaker is 'highly respected.. He said this after saying he never met the man he appointed.'
(Image by YouTube, Channel: seattletimesdotcom)   Details   DMCA

There's still too much happening, too fast, so I'm sticking with the Jimmy Cannon approach for a while. So "

-- Maybe it's just me, but I'm having trouble figuring out which is worse: a) claiming you don't know someone you just appointed to a pretty important job when critics immediately say the appointment is illegal and inappropriate; b) lying about knowing the guy when you just said on national TV less than a month ago that you know him and he's "a great guy"; or c) thinking that the best way to cover your butt for making what Is being described as an "unconstitutional appointment" of someone who is being widely described as a "crackpot" to the position of acting attorney general of the United States of America is to say, in effect, "Hey, they told me he was a good guy for the job. I never met him. Don't blame me."

The buck never stops at Donald Trump's desk. Think about it (you Trump supporters who stumbled in here by mistake can ignore this part), the man who occupies the most powerful position on the planet would rather people think he appointed a political hack to the most powerful law enforcement position in the country without ever talking to the man face-to-face than admit maybe he was a bit too hasty. Coincidentally, of course, at a time when the Justice Department this stranger would head has an active investigation of Trump and the 2016 election.

Maybe I shouldn't be surprised. After all, with Drumpf, lying is second nature, but being embarrassed is unacceptable. It must be someone else's fault. The media's! Yeah, that's it. I'll blame CNN.

-- Maybe it's just me, but if I were a member of the White House press corps, I wouldn't ask a single question at the next press conference if Sarah Huckabee Sanders is at the podium. No one. No questions. She took lying for a living to a new low with the use of a doctored video to revoke Jim Acosta's White House credentials. The truth is under constant assault by this administration and the Republican Party. The press is the defender of the truth. Sarah must go,

-- Maybe it's just me, but I have issues with voters who prefer a dead pimp, a congressman indicted for insider trading, another one indicted for using thousands of dollars in campaign funds for personal affairs and another one who is proudly racist over their opponents just because their opponents are Democrats. Methinks it says some unpleasant things about those voters. The Republican Party of Reagan, never mind Lincoln, no longer exists.

-- Maybe it's just me (and this definitely falls in the category of patting my own back), but those dots (I listed 17 of them) I wrote about back in January got connected on Election Day with a wave of women (mostly Democrats) elected to the House of Representatives. Sparked by the #metoo movement, with "a record number of women, mostly Democrats, running for political office this year at the local, state and national levels," I wrote, and with "female registered voters outnumbering male registered voters in the United States " this is not simply a revolution about sexual predation -- or an attitude of male sexual privilege, if you will. As I see it, it is an awakening, a moment of clarity, a realization that what was does not have to continue to be. Cannot be, in fact. Republicans are mostly clueless to the moment. Democrats ignore it to their continued ineffectuality at the polls." So I said. It's nice to be right occasionally, even nicer that the Democrats paid attention.

-- Maybe it's just me, but has anyone heard about anyone being charged with murdering Jamal Khashoggi? Are we still buddies with the Saudis?

-- Is that caravan still threatening our southern border?

-- Is it petty to criticize by name the members of your political party who didn't get re-elected because they didn't beg for your support? Is it typical (see item one) to think you, with your policies and rhetoric, bear no responsibility for their defeat?

-- Maybe it's just me, but Floridians deserve whatever they get for electing Rick Scott governor in the first place and maybe a bonafide racist to replace him. Throw in Marco Rubio, too. Imagine, counting all the votes is cheating.

-- And finally, maybe it's just me, but have you noticed that, unlike Congress, the third leg of government, the courts, have been holding their own against the onslaught of anti-everything coming out of the White House? The latest rulings stalling the Keystone Pipeline and preserving DACA show the value of independent courts. So why is Chuck Schumer being so soft on Mitch McConnell?