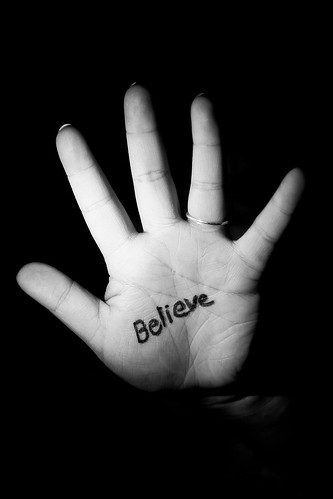 "Ah, mon cher, for anyone who is alone, without God and without a master, the weight of days is dreadful. Hence one must choose a master, God being out of style." - Albert Camus, The Fall

Propagandists are smart people. They begin their devious machinations with the premise that people need to believe in something rather than remaining suspended in doubt or forced to accept the existential courage of despair that leaves them temporarily lost and without answers or masters, suffering from free-floating anxiety.

Propagandists are like Mr. Death. They know people are afraid of death and aloneness and so use that fear to manipulate them into believing their cover stories for comfort.

Propagandists are like the Candy Man, handing out fictive life savers to the shipwrecked desperadoes willing to grasp on to anything even if it has a big hole in its center.

Propagandists take this need for belief and use it to create different scenarios that they develop into full-scale social theater pieces that will give the public various options to believe, all of which are meant to satisfy the public's yearning for something rather than nothing but which conceal the truth.

Facts don't matter with these offerings since they are completely illusory narratives.

These staged plays usually contain their opposites; one can choose what has already been chosen for one, even seemingly contradictory scripts with opposing roles. Seemingly is the relevant word, for the opposites are not opposites but counterparts, flip sides of the same coin. But each choice is a choice of belief that satisfies the need to believe no matter how unbelievable. It's the coin that's counterfeit.

For the propagandists, facts are fictions used to entice the audience into double-binds so entrancing that there is no exit. Or so they hope.

The French sociologist Jacques Ellul put it this way in his classic book Propaganda: The Formation of Men's Attitudes:

For no citizen will believe he is unable to have opinions. Public opinion surveys always reveal that people have opinions even on the most complicated questions, except for a small minority (usually the most informed and those who have reflected most). The majority prefers expressing stupidities to not expressing any opinion: this gives them the feeling of participation. For they need simple thoughts, elementary explanations, a 'key' that will permit them to take a position, and even ready-made opinions. As most people have the desire and at the same time the incapacity to participate [except to vote for and support pre-selected candidates], they are ready to accept a propaganda that will permit them to participate, and which hides their incapacity beneath explanations, judgments, and news, enabling them to satisfy their desire without eliminating their incompetence... He realizes that he depends on decisions over which he has no control, and that realization drives him to despair. Man cannot stay in this situation too long. He needs an ideological veil to cover the harsh reality, some consolation, a raison d'être, a sense of values. And only propaganda offers him a remedy for a basically intolerable situation.

Thus the need to choose a master, a prefabricated demigod. It is why the American presidents are presented and accepted by their followers as minor divinities. Yes, it is a civil religion, and yes, people will vehemently deny that they revere these figureheads. But those denials ring false, as recent history and the pageantry associated with the installation of these demigods will attest.

Barack Obama was considered by his followers and many others like a prayer come true, a black messiah come to redeem the country from its racist past and evil war-making deeds of his Muslim-hating, war-mongering predecessor George W. Bush. That Obama then waged war on seven Muslim countries didn't matter to his congregation. Not in the slightest. They revered him as strongly as they had denounced Bush, the black-hatted white demon to their white-hatted black god, for the western movie template underlies these political theater pieces. Obama was a dream come true and the dream factory went into overdrive. As the priestess Madonna prophesied with Like A Prayer in 1989:

Just like a dream
You are not what you seem
Just like a prayer, no choice
Your voice can take me there

Related Topic(s): Belief; Faith; Government; People; Propaganda; Propaganda And Political Myths; Theater, Add Tags
Add to My Group(s)
Go To Commenting
The views expressed herein are the sole responsibility of the author and do not necessarily reflect those of this website or its editors.