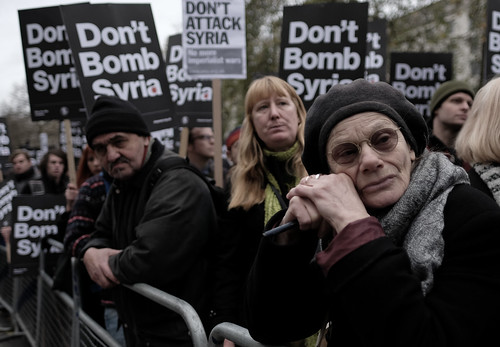 It is a war that empties Western treasuries, and impoverishes the aggressors, the countries that commit Supreme International War Crimes as policy.The West and its agencies that are perpetrating this holocaust are degrading themselves, and humanity. Silence and compliance from Western populations makes monsters of us all.

Rare glimpses of what is really happening on the ground in Syria are lightning flashes that tear apart the dark nights of Western war propaganda. Reverend Ashdown has been to Syria numerous times during the war, and he is imminently qualified to offer this assessment of the retrograde barbarity that we, in the West, support, beneath the lies of "humanitarianism":

"Syria is home to the most diverse Christian presence in the Middle East. All five 'families' of the Christian Church, and the Antiochene Patriarchates of the Syriac Orthodox, Eastern Orthodox and Greek Melkite Churches are situated in the country, whose State Constitution guarantees freedom of religious expression and worship. These Christian communities have coexisted for centuries alongside diverse expressions of Islam to create a society noted for its cultural and religious plurality. Ever since the beginning of the current conflict, Christians, along with Muslims who do not follow the radicalised ideology of the jihadists whom western and gulf nations support, have been specifically targeted, with Christian villages being besieged, ethnically cleansed, and constantly attacked by the multiple 'rebel' groups. Nationally, it is estimated that the Christian population has been more than halved during the conflict, with all the remaining Christian population living in the safety of government-controlled areas where they live peacefully alongside other members of Syrian society, and where Christian and Muslim leaders stand side by side promoting tolerance, reconciliation and the provision of welfare for all affected by the conflict."

Vanessa Beeley, too, has studied the war from inside Syria. In the interview below we witness the violent struggle of Syrian Christians who are defending themselves, and Christianity, from the vicious assaults of Western-supported terrorists.

Mark Taliano is a Research Associate of the Centre for Research on Globalization (CRG) and the author of Voices from Syria, Global Research Publishers, 2017. Visit the author's website at https://www.marktaliano.net.

Featured image is from Vanessa Beeley

Related Topic(s): Christianity; Civilization; Jihadists; Propaganda; Syria; War Crimes, Add Tags
Add to My Group(s)
Go To Commenting
The views expressed herein are the sole responsibility of the author and do not necessarily reflect those of this website or its editors.