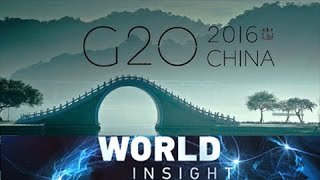 China has invested immense political/economic capital to prepare this summit. The debates will revolve around the main theme of seeking solutions "towards an innovative, invigorated, interconnected and inclusive world economy."

G20 Trade Ministers have already agreed to lay down nine core principles for global investment. At the summit, China will keep pressing for emerging markets to have a bigger say in the Bretton Woods system.

But most of all China will seek greater G20 backing for the New Silk Roads -- or One Belt, One Road (OBOR), as they are officially known -- as well as the new Asian Infrastructure Investment Bank (AIIB).

So at the heart of the G20 we will have the two projects which are competing head on to geopolitically shape the young 21st century.

China has proposed OBOR; a pan-Eurasian connectivity spectacular designed to configure a hypermarket at least 10 times the size of the US market within the next two decades.

The US hyperpower -- not the Atlanticist West, because Europe is mired in fear and stagnation -- "proposes" the current neocon/neoliberalcon status quo; the usual Divide and Rule tactics; and the primacy of fear, enshrined in the Pentagon array of "threats" that must be fought, from Russia and China to Iran. The geopolitical rumble in the background high-tech jungle is all about the "containment" of top G20 members Russia and China.

It doesn't take an oracle to divine which project is intriguing -- and in many ways seducing -- the Global South, as well as an array of G20 member-nations.

Shuttling between the West and Asia, one can glimpse, in myriad forms, the graphic contrast between paralysis and paranoia and an immensely ambitious $1.4 trillion project potentially touching 64 nations, no less than 4.4 billion people and around 40 percent of the global economy which will, among other features, create new "innovative, invigorated, interconnected and inclusive" trade horizons and arguably install a post-geopolitics win-win era.

An array of financial mechanisms is already in place. The AIIB (which will fund way beyond the initial commitment of $100 billion); the Silk Road Fund ($40 billion already committed); the BRICS's New Development Bank (NDB), initially committing $100 billion; plus assorted players such as the China Development Bank and the Hong Kong-based China Merchants Holdings International.

Chinese state companies and funds are relentlessly buying up ports and tech companies in Western Europe -- from Greece to the UK.

Cargo trains are now plying the route from Zhejiang to Tehran in 14 days, through Kazakhstan and Turkmenistan; soon this will be all part of a trans-Eurasia high-speed rail network, including a high-speed Transiberian.

The $46 billion China-Pakistan Economic Corridor (CPEC) has the potential to unblock vast swathes of South Asia, with Gwadar, operated by China Overseas Port Holdings, slated to become a key naval hub of the New Silk Roads.

Related Topic(s): China Politics; G20 Meeting; Oil; South China Sea; Trade, Add Tags
Add to My Group(s)
Go To Commenting
The views expressed herein are the sole responsibility of the author and do not necessarily reflect those of this website or its editors.