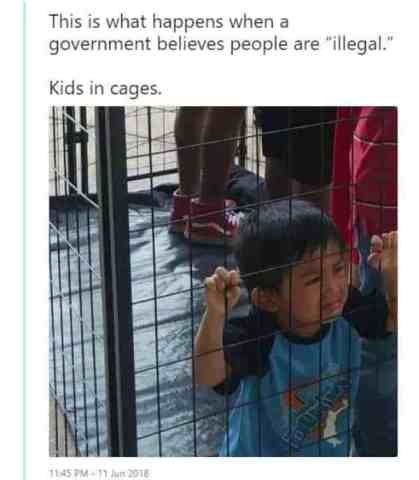 In just the past year and a half, the Trump administration's war on immigrants has perpetrated the following crimes against humanity:

That's far from all.

Licensed Office of Refugee Resettlement (ORR) psychotherapists are violating migrant children's trust by submitting confidential session notes to ICE, which then uses the information against the children in immigration court to deny them asylum status and deport them.

Two years ago we learned about refugee children in U.S. custody being injected with psychotropic drugs.

In August 2019, the Trump administration ramped up its war on immigrants when it proposed denying green cards or visas to immigrants who rely on public benefits like Supplemental Nutrition Assistance Program (SNAP) benefits, Medicaid, and Section-8 housing.

But of course, who can ignore the administration's child separation policy?

Last January, an Office of Inspector General (OIG) report revealed not only did the U.S. government separate thousands more children from their parents at the US-Mexico border than previously thought before Trump ended the policy in 2018.

It was separating them before authorities admitted a child separation policy existed.

"It is critical to find out as much as possible about who was responsible for this horrific practice while not losing sight of the fact that hundreds of families have still not been found and remain separated. There is so much more work to be done to find these families."

The Trump administration, naturally, has an answer for this.

According to Trump campaign spokesman Tim Murtaugh, the reason these children can't be reunited is because their parents do not want them back.

Related Topic(s): Asylum; Children; Children Separated From Parents; Families; Immigrants; Policy; Trump; Trump Hates Immigrants, Add Tags
Add to My Group(s)
Go To Commenting
The views expressed herein are the sole responsibility of the author and do not necessarily reflect those of this website or its editors.