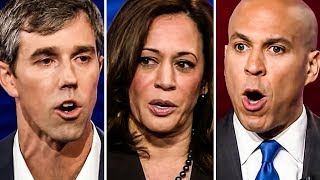 Americans vote their pocketbooks. It's the economy, stupid. Absent a war or recent terrorist attack, conventional wisdom believes that voters prioritize domestic issues. Right now, conventional wisdom is correct. According to the latest Pew Research poll, the five most important issues for Democrats are healthcare, education, Medicare, poverty and the environment.

So it's not surprising that the major Democratic presidential contenders' campaigns are focusing on economic and other America-centric issues. Nor is it shocking that the news media, never more anemic or less willing to question the candidates, is ignoring their stances on foreign policy. You could watch five hours and read 50 pages of news every day and never learn where a top Dem stands on issues of war and peace, defense spending, assassination drones, Guanta'namo, NSA surveillance of Americans, foreign adventurism or human rights. Trust me, I know.

Still, voters deserve to know the would-be presidents' positions on issues that extend beyond U.S. borders. Here's what I found.

The Democrats on Our Crazy Defense Spending

The military sucks up 54% of discretionary federal spending. Pentagon bloat has a huge effect on domestic priorities; the nearly $1 trillion a year that goes to exploiting, oppressing, torturing, maiming and murdering foreigners could go to building schools, college scholarships, curing diseases, poetry slams, whatever. Anything, even tax cuts for the rich, would be better than bombs. But as then GOP presidential candidate Mike Huckabee said in 2015, "The military is not a social experiment. The purpose of the military is to kill people and break things." If you're like me, you want as little killing and breaking as possible.

Current frontrunner Joe Biden (33% in the polls) doesn't talk much about defense spending. He reminds us that his son served in Iraq (so he cares about the military) and that we shouldn't prioritize defense over domestic programs. Vague. Though specific programs might get trimmed, Lockheed Martin could rest easy under a President Biden.

"Since he arrived in Congress, [runner-up] Bernie Sanders [19%] has been a fierce crusader against Pentagon spending, calling for defense cuts that few Democrats have been willing to support," The Hill reported in 2016. "As late as 2002, he supported a 50 percent cut for the Pentagon." Bernie is still a Pentagon critic but he won't commit to a specific amount to cut. He wouldn't slash and Bern. He'd trim.

Elizabeth Warren (8%) wants "to identify which programs actually benefit American security in the 21st century, and which programs merely line the pockets of defense contractors then pull out a sharp knife and make some cuts."

Neither Pete Buttigieg (8%) nor Beto O'Rourke (6%) have articulated any firm foreign policy positions whatsoever. Buttigieg brags about having served in the Navy Reserve. Unlikely that either man would change much.

Kamala Harris (5%) has not weighed in on military spending. She has received substantial campaign contributions from the defense industry, though.

The Democrats on Wars for Fun

As senator, Biden voted for the optional wars against Afghanistan and Iraq. He lied about his votes so maybe he felt bad about them. He similarly seems to regret his ro le in destroying Libya.

Sanders voted to invade Afghanistan. His comment at the time reads as hopelessly naÃ¯ve about the bloodthirsty Bush-Cheney regime: "The use of force is one tool that we have at our disposal to fight against the horror of terrorism and mass murder... it is something that must be used wisely...and with great discretion." Sanders voted against invading Iraq, favored regime change in Libya (albeit nonviolently) and voted to bomb Syria.

There have been no major new wars since 2013, when Warren joined the Senate, so her antiwar bona fides have not been tested. Like many of her colleagues, she wants an end to the "forever war" against Afghanistan. She also wants us out of Syria.

Related Topic(s): Campaign Advertising; Campaign Ethics; Campaign Rhetoric; Democratic Cowards; Democratic Socialists; Issues; Military; Progressives, Add Tags
Add to My Group(s)
Go To Commenting
The views expressed herein are the sole responsibility of the author and do not necessarily reflect those of this website or its editors.