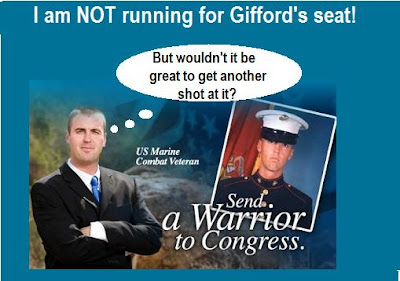 Let's face it, the Giffords' shooting brought out both the best and the worst in us: President Obama gave a fitting speech while pundits and politicians fought to prove who was to blame - and not to blame. And amidst this spectacle, we gave short shrift to some details which are now only emerging.

We all knew that Giffords' election opponent, Jesse Kelly, used gun imagery (literally) in his campaign against Giffords. And we know that he wasn't at all apologetic about it. We also know that know that Kelly fully intended to keep his campaign alive after the election:

The GOP rumor circuit is buzzing with word that Kelly will announce his plans to run against Giffords as soon as mid-January.

And, depending on how things go at tomorrow's hearing of the Commission on Appellate Court Appointments, he may end up with a friend on the Independent Redistricting Committee.

That "friend" is one Christopher Gleason, whose ties to a right-wing religious group, Vision 360, kept him from being considered. The group "plants" churches in major metropolitan areas.

Vision360 is committed to furthering the message, the movement and the cultivation of leadership. As a church planting organization, our mission is to serve and empower a collaborative church planting community in 500 global cities by 2025. We believe through an investment in gifted leaders, we can change the spiritual trends of our country and the world.

The ministry's website also spouts fundamentalist biblical values which seem at odds with it other value statements concerning the now-pejorative social justice* (made so by Glenn Beck). To it's credit, however, it does not seem to ally itself with any fundamentalist denomination like the Southern Baptist Convention. Is it Reconstructionism in disguise? It's possible, since support of Jesse Kelly conveys the Reconstructionist premise of infiltrating government.

Tucson is oddly silent lately, maybe because Brian Miller, Pima County Republican Party chair, has called on everyone to take a break from politics for a while.. But with politics and politicians, nothing is really quiet from lack of activity. And while I haven't been able to find out any material on Gleason's appointment, sources say that Tea Partiers, Vision 360 and Jesse Kelly are busy laying the foundations of a new campaign.

Of course, timing is crucial, but so is the strategy of not seeming too eager to pounce on the tragedy, especially with the poor judgment of his last campaign. So, in a sense, Kelly's future will hinge on several things: Vision 360's generosity and patience and the CD 8 constituents' patience and compassion for Giffords.

Rev. Dan Vojir is has been writing/blogging on religion and politics for the better part of ten years. A former radio talk show host (Strictly Books €" Talk America Radio Network) and book publisher, Dan has connected with some of the most (more...)
Related Topic(s): Arizona Massacre; Gabrielle Giffords; Glenn Beck; Jesse Kelly; Southern Baptist Convention; Vision 360, Add Tags
Add to My Group(s)
Go To Commenting
The views expressed herein are the sole responsibility of the author and do not necessarily reflect those of this website or its editors.