Thomas Jefferson Portrait
(Image by (Not Known) Wikipedia, Author: Author Not Given)   Details   Source   DMCA
Thomas Jefferson Portrait by WikipediaI'm 17 or 18 and my parents have decided to buy me a new typewriter to replace the old East German "Optima" I've shared with my siblings since junior high! (Not sure to this day how we got an East German typewriter during the Cold War-nutty 50s and 60s, but" it worked well, even if it was heavy as a Volkswagon!) This is to be my "celebration" typewriter--now that I'm first in my extended family to go to college!

I spool the sheet of paper into place, a little past the new, inky red and black ribbon. Sweet, clicking sound as I roll; cold feel of metal against my palm as I slap the shiny return lever! The tactility of it all, the smell of it all!--something our electronically attuned youth will never know in their digitalized shell-worlds. I type from memory:

"When in the Course of human events, it becomes necessary for one people to dissolve the political bands which have connected them with another, and to assume among the powers of the earth, the separate and equal station to which the Laws of Nature and of Nature's God entitle them, a decent respect to the opinions of mankind requires that they should declare the causes which impel them to the separation."

What a sentence! That conditional clause runs on like a cheetah, but all the elements pounce into place with the impulsion of the predicate. I continue whirling:

"We hold these truths to be self-evident, that all men are created equal, that they are endowed by their Creator with certain unalienable Rights, that among these are Life, Liberty and the pursuit of Happiness. " That whenever any Form of Government becomes destructive of these ends, it is the Right of the People to alter or to abolish it."

That, in my tender years, is the essence of the country I know and love, as stated inimitably by Thomas Jefferson, one of the greatest men and loftiest thinkers who ever lived. And so I memorized his words, as I'd memorized the "Gettysburg Address," parts of Shakespeare, parts of the Bible--truth and beauty merged in immortal prose or verse.

But years and decades can abrade tenderness, and now, twice the age of Jefferson when he wrote The Declaration of Independence (assisted by Ben Franklin and John Adams), I find the words hollow as a great brass bell, ringing throatily, but with cracks to drive an SUV through!

We define happiness in very personal terms, and there's never an end to it--not enough material goods, not enough attractive mates, not enough life and "happiness" to go around! And so, we're on a treadmill, and wind up pursuing unhappiness, never able to sate our appetites--constantly stoked by an advertising, consumerist ethos enjoining more and more and more.

"Life" and "liberty" likewise are merely words, memes we need not analyze. Of course, everyone desires these, but what happens when my life and liberty infringe upon another's (as has so often been the case in the story of America)?

If only Jefferson had written about the "pursuit of wisdom"--we'd have had a challenge worthy of a free and noble people. For, "where shall wisdom be found?" And, "where is the place of understanding?" we read in the world's first great drama, The Book of Job.

Now in this burgeoning new millennium our old republic has lost its intellectual and moral moorings, jolting from crisis to crisis. In Jefferson's time we were all about separating ourselves from our "Mother Country," and we have been on a rampage ever since to define ourselves as "exceptional," with a "manifest destiny." And we have ransacked the planet to prove it! But, if we are to survive this century, we best learn how to reconnect--with ourselves, our global neighbors, Nature. The wise words I turn to now were written in 1852 by Chief Seattle, in response to a US government inquiry about buying tribal lands. 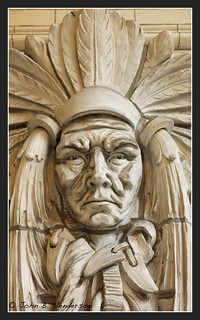 Chief Seattle by jbhthescots"But how can you buy or sell the sky? The land?... If we do not own the freshness of the air and the sparkle of the water, how can you buy them?

"Every part of this earth is sacred. " Every shining pine needle, every sandy shore, every mist in the dark woods, every meadow, every humming insect. All are holy in the memory and experience of my people. " We are part of the earth and it is part of us. " What befalls the earth befalls all the sons of the earth.

Gary Corseri has published & posted his work at hundreds of venues worldwide, including Op Ed News, The New York Times, CounterPunch, CommonDreams, DissidentVoice, L.A. (and Hollywood--) Progressive. He has been a professor in the US & Japan, has (more...)
Related Topic(s): Activist; Laws; Liberty; Liberty; Nature; People; People; Rights, Add Tags
Add to My Group(s)
Go To Commenting
The views expressed herein are the sole responsibility of the author and do not necessarily reflect those of this website or its editors.