The original Popular Front was a French institution of government that existed, in a variety of forms, between 1934 and 1938. After being the engine of several French governments during that period, it eventually fell apart in the fall of 1938 over what policies France should adopt in dealing with the coming fascist victory over the Spanish Republic. At various times its major components included the French Communist Party (a parliamentary party, it should be noted), the French Socialist Party, and the center-left Radical Party, plus various other smaller groupings. Domestically it followed a generally conventional left-wing line, attempting to improve the lot of the French working class, under capitalism.

Citroen 7 CV. Yes, folks. This was a very popular front (and a great, actually progressive car for its time), in France, both before and after World War II.
(Image by pedrosimoes7)   Details   DMCA

In foreign policy, it was generally opposed the fascist Germany and Italy, but not so opposed that it abandoned the general European "non-intervention" policy in the Spanish Civil War (1936-39). That policy was ignored by both Nazi Germany and Fascist Italy. Indeed, many observers over the years have thought that without Italian ground troops and Nazi air forces, and with even modest arms supplies made available to the elected Republican (in the literal sense) government from the "Western Democracies," that the Republic could have prevailed. Some outside assistance was supplied by the Soviet Union. And significant numbers of foreigners came to fight alongside the Republicans, in the International Brigade.

At any rate, the First Popular Front was originally organized in France to oppose fascism, both there and abroad. Which brings us of course to the present time in the U.S. More and more authorities/observers are defining the Trump government as fascist. I have spent considerable time on that subject. One element that I have introduced into my analyses has been the presentation of a series of definitions. They have all said the same thing, beginning with the historical fact that fascist governments have always been established in the attempt to preserve and serve capitalism and the capitalist ruling class of their home country. But I have been trying to get them shorter. A current one is:

"Fascism is a system of government in which there is no separation of powers and the Executive is in control of all branches of the State apparatus, including the judiciary. It is designed to maintain and expand the power of the State for the benefit of a capitalist ruling class. Fascism is characterized by the use of racism, misogyny, and xenophobia, in various proportions, as well as force and terror, to maintain its control. The State may have a single charismatic leader. There may be a single national ideology supported by law, but if not, certain ideologies are banned by law, and certain religious/non-religious views are criminalized. There are no independent media." 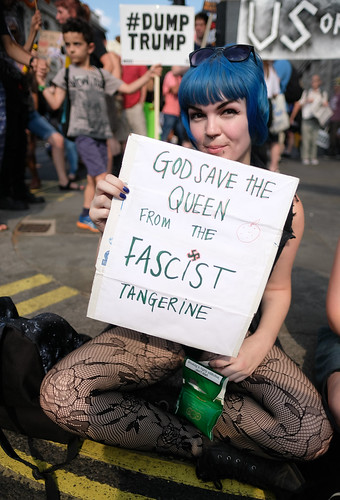 Trump - the Fascist Tangerine. Let's hope that he does go down in history as, in the end, a very bad joke.
(Image by alisdare1)   Details   DMCA

As I have written previously, the fascist threat has been developing in the Republican Party for quite some time. Trump and Trumpism are only the latest, most open, manifestations of it. BUT, he's not there yet. And IF the Democrats can win a majority in the House of Representatives, the progression that Trump is clearly following in that direction may be slowed down, if not reversed. If the Dems. were able to take both Houses, that progression could almost certainly be reversed. But it is becoming increasingly unlikely that they will take the Senate. Furthermore, if the Republicans retain control of both Houses, the nation will continue its inexorable move towards the establishment of a what I have called a "21st Century Functional Fascist State."

In a fine column in The New York Times Sunday Review of October 21, 2018, David Leonhardt discussed what Republican retention of full control of the Congress would mean, legislatively and in terms of policy. In my column in this space next week, I shall be discussing what a Repub. victory will mean in terms of governance, government, and the Constitution. But let us say here that both outcomes would be bad for most people living in our country. Unfortunately, since "Race is the Trump Card" that ultimately keeps him in power, there would be enough of his followers for whom that is Number One, to keep him there.

So, what does this all mean? The Popular Front, that exists in this country without the name, has to be followed to the voting booth and to the extent that it can be strengthened in these last two weeks before election day, that must be done. Functionally, it means voting Democratic on THIS election day. Does that mean being a Democrat? Not necessarily. I hold no illusions about the Democratic Party. But right here, and right now, it means voting that way. (And of course, there are many traditional Republicans like Steve Schmidt, Max Boot, and heaven-help-us George Will who are urging their adherents to vote Democratic.) Because without at least a Democratic House (and maybe even with it --- but that's another story), the Trumpites will be moving forcefully right down the road to frank fascism.

First of all, both major political parties represent, with different emphases, the capitalist ruling class of this country. Second of all, since the Democratic Party was taken over by the Bill Clinton/Al Gore led Democratic Leadership Council in the 1980s, it has left behind most of what leftover elements of the New Deal and the short-lived Great Society and until recently, (see certain elements of it like the "Sanders/Warren Wing") has not much opposed the dominant economic sector of the ruling class in terms of policy. Third of all, of course parties like the "Greens" have more progressive platforms, and with the re-emergence of the U.S. Democratic Socialist Party, we are beginning to see an electoral candidate here and there who actually advocates the eventual transition from capitalism to socialism.

BUT, fourth of all, we do not have a parliamentary system, in which governing coalitions can be made. Right now, we a hard-and-fast two-party system, with, for Congress (but of course, with the legacy-of-slavery Electoral College not for the Presidency) first-past-the-gate voting. Fourth, we don't have a universal voting franchise in the US. Voter suppression has become ever more important to the Repubs. If they retain full control of the Congress that will only become worse.

Does capitalism need to be replaced? Well, anyone who has reading my writings for even not-too-long knows my position on that one. Does the Democratic Party (which, let us have no illusions, will never be a socialist party) need to taken back from the Clinton/Democratic Leadership Council (which no longer exists in name but surely exists in function) and replaced by a progressive party along the lines of Bernie Sanders' "New Deal on Steroids?" Yes. Is it necessary to build a multi-pronged socialist movement the United States? Yes. But let us be clear. None of this will happen if the Trumpites sweep the mid-term Federal elections next month. To repeat, as I will be demonstrating in my column next week, they will then set the nation firmly on the road to fascism.

SO. For this election at least, it is absolutely necessary to have an anti-Trump/Repub. Popular Front. Otherwise, there will no place for anti-Trump Republicans, liberal and progressive Democrats, Greens, and socialists to have open discussions about and then making plans for moving our great nation away from the fascist abyss and forward into a brighter future. As happened in Nazi Germany, all will be submerged under the Fascist Tide.

Steven Jonas, MD, MPH, MS is a Professor Emeritus of Preventive Medicine at StonyBrookMedicine (NY) and author/co-author/editor/co-editor of over 35 books. In addition to his position on OpEdNews as a "Trusted Author," he is a Senior Editor, (more...)
Related Topic(s): Capitalism; Class; Democratic; Democrats; Election; Elections; Fascism; Fascist; France; Popular Front; (more...) Republican; Socialism, Add Tags  (less...)
Add to My Group(s)
Go To Commenting
The views expressed herein are the sole responsibility of the author and do not necessarily reflect those of this website or its editors.