"Trump's Base" is a common feature for many of us writers on the "Trump Presidency." (I put the term in quotes because this particular one has so many features that set it apart from any of its predecessors.) Trump clings to the Presidency, where any other such an incompetent (forgetting about the possible criminality of the man) would have been forced out of the office in one way another by now. Indeed, one of the most shocking, as well as upsetting, aspects of the reporting in Bob Woodward's new book is how totally incompetent the man is. Shrinking though his base is, to some extent at least, as we approach the 2018 mid-terms, politically it is still major factor in determining which way those elections will go, as is, of course, Trump himself. That is because, as is well-known, many members of the Republican majority in the House of Representatives come from highly gerrymandered/voter suppressed districts in which the right-wing of the Party, that votes in the primaries, holds extraordinary sway. 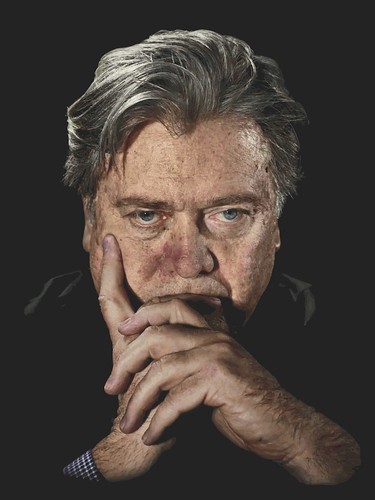 As is well-known, the excuse given for why Republican House members who want to stay in the House do not oppose Trump on anything, is that if they do, they will be "primaried" from the further Right (and this applies to certain Senators too). And there have been enough examples of this happening so that many Congressional Repubs. just stay in line. (See for example the former House Republican Majority leader, the rightist Eric Cantor, who just happened to be not quite far-right enough on immigration [that is, he wanted to actually do something to solve some of its problems] who was "primaried" right out of the House.) Of course, many of them don't worry about being primaried for "getting-out-of-line" because they are down-the-line Trumpites and don't have to make up their support for him in any case. And so, as we approach the 2018 mid-terms, the "Trump base," how big it really is, and what it will or will not do, is a critical factor in the potential outcome.

Whether or not it will be a deciding factor is unknown. But Trump himself certainly seems to think so. He is having one campaign rally after another. He says much the same thing each time to crowds (we never see their true size on television) that seem to be very carefully selected. (The persons in the background behind Trump are almost all white, although there is always a tiny smattering of non-whites as well.) The speeches get very well-covered on Trump-TV, which of course is the ideal echo chamber to reach Trumpites across the country, for each of his rallies.

And so, as we are seeing Trump and his base in action here, since by all accounts it hasn't changed (except to perhaps be getting slightly smaller) I thought it useful to revisit in part what I had to say about it about a year ago. What I have found fascinating in re-reading it is that while the names have changed, the types of what non-Trumpites regard as excesses have not changed. They have just gotten more extreme, and Trump and his crew have just gotten closer to the production of proof that he and they have engaged such as activities.

These include: possible conspiracy to commit collusion with Russians; apparently buying the silence of women with whom he had affairs some time ago, with, among other things, the possible violation of campaign finance law; possibly, the commission of the crime of obstruction of justice; possible engagement in bribery to attempt to buy silence; the wholesale violation-of-basic-standards-of-humanitarianism in the handling of both undocumented immigrants and asylum seekers on the Southern border; the never-ending stream of lies/misinformation being documented daily by The Washington Post. And so on and so forth. And of course, the closer he seems to be getting to being cornered for the commission of a variety of crimes, the more he acts just like a cornered man. And then further are all the campaign promises he has yet to fulfill: "draining the swamp;" "hiring only the best;" "working harder than any of his predecessors;" "setting out a massive infra-structure program;" "repealing Obamacare and replacing it with something much, much better."

Now in all fairness, it must be noted that Trump has fulfilled certain campaign promises. It's just that those don't benefit his base and actually as they are implemented down the road will have a major negative impact on their interests, e.g., climate change raging out of control. See also the passive of the massive tax cuts for the rich and the large corporations (which he did promise to those entities), the massive deregulation benefitting those same corporate interests, and the continued slashing of any Federal governmental programs that benefit the poor and the working class that he can get his hands on (e.g., see what's happening at Housing and Urban Development).

As Trump lurches from disaster to disaster (at least that's how they appear to the outside world), "Trump's Base" for the most part appears to remain immovable in its continuing support of him. So why? Why does his base seem to remain solidly behind him? More and more (in 2018) many of his policies work directly against the interests of many members of his base, from the loss of jobs due to his illogical tariff policies to the removal of health insurance coverage for pre-existing conditions which his "Obamacare Destruction Strategy" (still) aims at directly. Not as shocking as the Trump actions and inactions themselves, but at least surprising nevertheless is the fact that on air and in print (Paul Krugman is one outstanding exception to this finding) most political commentators are still remaining publicly puzzled by this one. "Cannot understand it," "it's inexplicable," and "defies logic that 'the Base' will vote against their own interests."

Really? It depends upon which interests one is talking about. There is much criticism of Trump and Trumpism on the mainstream media (that is the media led by the likes of Trump TV [otherwise known as Fox"News"]), put forth by both hosts and guests. They are strongly and rightly critical of many Trump policies and practices. But there is one word that doesn't get said much. And that's "race." Although it, and its companion "racism," are mentioned every once in a while, one simply doesn't hear them much. BUT.

Let's recall what Trump ran on. First, beginning with his joining the birtherism movement in 2011 and then becoming its most prominent spokesman, racism has been front-and-center for Trump. Interestingly enough (I just found out, through OpEdNews' superb indexing system), back on May 6, 2011, I published a column on Trump and his racism on OpEd News, entitled "Race is the Trump Card" (click here) "How about that," as the great New York Yankee announcer from long ago Mel Allen, used to say.

Trump's incessant attacks on Obama and "Obamacare" even since the election reinforce that. After all, as right-wing a partial solution to health care financing problems as it is (after all, it is modeled on "Romneycare" in Massachusetts) it is, it is associated with the first black President (for who Trump seems to have a particular hatred). Then, as is very well-known, he began his campaign in 2015 with the "murderers and rapists" attacks on Mexicans, and by implication all Latino immigrants, documented or undocumented. This conveniently combined racism with xenophobia. Then came the Islamophobia, which in the way Trump uses it also has a racist nature.

And now there are the NFL players, Maxine Waters, Don Lemon, President Obama (still), and etc. If there is a single black person, or a group of them, that Trump can rant against for one reason or another, he will. In fact, he looks for such individuals and groups to attack. And boy is the NFL season, which will likely see a variety of kinds of protests from players, black and white, against racial injustice in this country, perfectly timed for Trump's racist attacks as he desperately tries to avoid a Democratic takeover of the House (which would mean, among many other things, an intrepid investigator that he could not fire: Rep. Adam Schiff at the House Intelligence Committee).

If down deep one voted for Trump because he is a racist, a xenophobe, or an Islamophobe, or some combination of all three, the only thing that could dislodge that sort of primal, guttural, thinking would be if Trump himself turned around on one or more of them. That he seems unlikely to do, and numerous speeches, but more importantly policy choices, confirm that view.

But many authorities, especially among both liberals and the Left, don't want to go too near this one. How can one label major elements of the (white) working class as "racist?" (One group that does deal with this issue, in a progressive way, is RefuseFascism.org.) Well, first of all, while Trump certainly has working class support --- and every major fascist movement in history has found some support amongst their working classes --- significant elements of the Trump base are from the petit bourgeoisie--- small business people, skilled craftsmen, independent professionals like physicians, lawyers, and accountants in private practice (ever notice how many right-wing Republicans in Congress are physicians?), very traditionally supporters of pro- and proto-fascist movements. Second of all, shying away from the truth about many of his supporters --- that are personal racists --- does nothing to help to develop a strategy to deal with it.

Steven Jonas, MD, MPH, MS is a Professor Emeritus of Preventive Medicine at StonyBrookMedicine (NY) and author/co-author/editor/co-editor of over 35 books. In addition to his position on OpEdNews as a "Trusted Author," he is a Senior Editor, (more...)
Related Topic(s): Krugman; Obama; Race; Republican; Trump And Bolton; Trump And Putin; Trump Health; Trump Idiot-in-chief; Trump Liar; Trump Presidency; (more...) Trump Racist; Trumpism; Xenophobia, Add Tags  (less...)
Add to My Group(s)
Go To Commenting
The views expressed herein are the sole responsibility of the author and do not necessarily reflect those of this website or its editors.