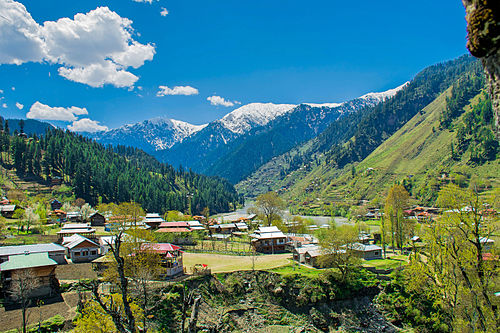 Although India keeps asserting that Jammu & Kashmir is its inalienable part, most Indians know little about the area under Pakistan beyond the usual rhetoric. Pakistan Occupied Kashmir (PoK) includes both the so-called Azad (Free) Jammu and Kashmir (AJK) and Northern Areas, also known as Gilgit-Baltistan (GB). The two territories seldom get covered in the Indian media. Even for Pakistani dailies, with the exception of Dawn and The Express Tribune, AJK and GB are newsworthy only during calamities. There is thus very little in the public domain on the evolution of politics in that belt.

The Institute for Defence Studies and Analyses, (IDSA), a New Delhi think tank, has come up with a 480-page tome, 'Pakistan Occupied Kashmir' to fill the vacuum to the delight of scholars, analysts, policy makers and the strategic community. Authored by Surinder Kumar Sharma, Yaqoob ul Hassan and Ashok Behuria, the study offers insights into the dynamics of political systems in this 'other' Kashmir, their complex interactions with the government in Islamabad, and the responses of their local leaderships to their subservient status over the past 70 years. The study also covers the struggles of pressure groups to articulate their concerns and Pakistan's dilemma in getting to grips with their ideas of Insaniyat (humanity), Jamhuriyat (Democracy) and Kashmiriyat (identity of the Kashmir people).

Surprisingly, the study is without the hype and emotional tone one is familiar with in matters Kashmir. The style is clinical; the authors provide facts and analyses on the genesis and evolution of various political parties, interest groups, and the background and role of different personalities operating on the Pakistan side of the Line of Control (LoC) in Kashmir. The highlights of the study are as follows.

Notwithstanding their relationship of 'disenchantment' with Pakistan, a variety of administrative reforms have been tried in AJK and GB to make the dispensation more representative, albeit selectively. Nothing clicked because the overall control has remained with the GHQ Shura, Pakistan's military high command, acting through Islamabad. AJK appears better off than GB, probably because it has had longer exposure to political winds. Common to both regions is their political-economic subjugation by the Pakistani state, a process that has been institutionalized through coercion of the state to keep the region under strict control.

The study cites the remarks of an unidentified local observer: "One can vaguely deduce the status of AJK from the statement that Azad Kashmir is neither a sovereign state nor a province of Pakistan but rather a 'local authority' with responsibility over the areas assigned to it under the ceasefire agreement." The status of Gilgit-Baltistan is worse. It has no legal standing and is being ruled as a de facto colony of Pakistan. In both regions, the civilian leadership kowtows to the army according to local media reports.

Syed Manzoor Hussain Gillani, who retired as acting chief justice of the AJK Supreme Court in May 2010, has an interesting take: "The administration of AJK and Gilgit-Baltistan was entrusted to Pakistan under UN Security Council resolutions. They have since been treated in many respects as administrative units of Pakistan and are subject to most of the liabilities and obligations of a province under the Pakistan constitution. (But) they do not have any of the constitutional rights and powers enjoyed by the provinces".

The study is critical of Pakistan for not having contributed enough to help improve AJK's economy and for institutionalizing its overdependence on Islamabad in order to strengthen the latter's hold on the territory. The local economy is a 'money order economy' reliant on remittances from its people who had migrated to the UK. These remittances are dwindling of late following UK's referendum to leave the European Union and due to a weakening sense of belonging among the young generation of migrant families towards their ancestral land.

A unique feature of the study is its profiling of the political parties at work, 44 in AJK and 14 in GB. Their ideologies, aims, objectives, links and alliances with other parties and militant groups are listed along with funding sources and areas of influence. The study also contains the profiles of prominent leaders.

Political parties pledging their loyalty to Pakistan, that is, favouring accession of PoK to Pakistan, are allowed to operate freely in both AJK and GB. Those advocating autonomy are tolerated, while those demanding independence or genuine autonomy are barred from contesting elections. Most often, they are not allowed to engage in any kind of political activism in the region, although the demand for autonomy, and even separatism, is simmering.

Kashmiris who talk about Pakistan's highhandedness are thrown into jails, threatened, denied travel documents and, allegedly, tortured. Their growing poverty, alienation and resentment towards Pakistan have given birth to demands for social liberation within AJK according to the study, which reports the emergence of a proto-nationalist movement: "The issue of social liberation has come to the fore within the nationalist movement. The revolutionary currents developing amongst the youth through the Jammu and Kashmir National Students Federation (JKNSF) in AJK are worrying the rulers in Islamabad".

Various steps taken to 'stifle' the nationalist sentiments are given in detail. Also dwelt with at length is the ongoing debate on the future political status of GB and the controversy stirred in January last year by the Sartaj Aziz (former foreign minister) Committee's call for de facto integration of GB with Pakistan. The study draws attention to a 2009 editorial in the sedate Karachi daily Dawn's warning that a provocative sense of nationalism is getting stronger in Gilgit-Baltistan: "The same people who have unflinching loyalty towards the state of Pakistan and were considering themselves as Pakistanis are now talking about separation, freedom and a separate nation of Gilgit-Baltistan."

The study holds a mirror to the parts of Kashmir under Pakistan. Its conclusions underline the mistrust between AJK and GB, asserting that: "Throughout most of its history, the people of Gilgit-Baltistan were never consulted by the AJK leadership on the Kashmir issue, even if GB was very much a party to the dispute. It is a hard reality that the government of Pakistan has also actively discouraged social and political linkages between the two regions. Thus, the two regions have developed separate geocultural identities even if they form a part of the Jammu and Kashmir state." A natural fallout of this is their separate political dynamics, unrelated to one another.

The study feels this situation will likely continue in future. Time alone will tell if it will proved right.

Related Topic(s): Activism; Alienation; Army; Author; Disputed; Economic; Freedom; Government; Ideology; Issues; (more...) Loyalty; Media; Parties; Poverty; Profiles; State; Systems, Add Tags  (less...)
Add to My Group(s)
Go To Commenting
The views expressed herein are the sole responsibility of the author and do not necessarily reflect those of this website or its editors.