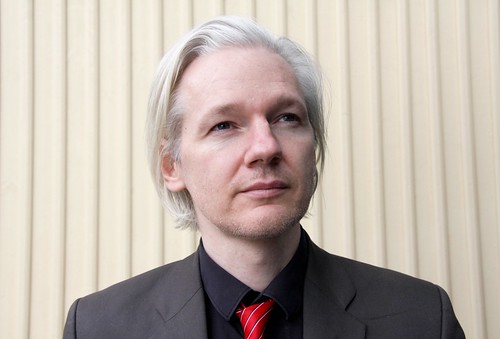 The long legal ordeal of Julian Assange -- and the continuing threats against the WikiLeaks founder -- make a mockery of the West's supposed commitment to press freedom and the public's right to know.

Nearly five years ago, Ecuador granted WikiLeaks founder Julian Assange political asylum at its London embassy. The original purpose of the asylum was to avoid extradition to the United States. Two years earlier, Swedish authorities had launched an investigation of Assange for sexual assault. Sweden has now dropped that investigation.

Assange called the Swedish decision to end the investigation an "important victory for me and for the U.N. human rights system." But, he said, the "proper war was just commencing," because the London Metropolitan Police warned if Assange leaves the Ecuadorian Embassy, they would arrest him on a 2012 warrant issued after he failed to appear at a magistrate's court following his entry into the embassy.

The original reason for granting asylum to Assange remains intact. The U.S. government has been gunning for Assange since 2010, when WikiLeaks published documents leaked by whistleblower Chelsea Manning. Those documents, which included the Afghan and Iraq war logs and U.S. State Department cables, were ultimately published in the New York Times, the U.K. Guardian, and the German magazine Der Spiegel.

The leaked reports exposed 20,000 deaths, including thousands of children, according to Assange. Many of them contain evidence of war crimes. [Among the leaked material was the "Collateral Murder" video, a gruesome view from the gun-barrel of a U.S. helicopter gunship as it mowed down a group of Iraqi men, including two Reuters journalists, as they walked on a Baghdad street -- and then killing a man who stopped to help the wounded and also wounding two children in his van.]

It was never clear what role Sweden played in the Assange saga. Criminal charges were never filed there and Swedish authorities never took Assange up on his offer to make himself available for interviews with Swedish authorities in London. The Swedish prosecutor insisted that he travel to Sweden to be interviewed. Assange declined, fearing that if he went to Sweden, that country would extradite him to the United States.

The Swedish investigation of Assange may have been instigated at the behest of the United States. Journalist John Pilger documented political pressure by the U.S. government on Swedish authorities: "Both the Swedish prime minister and foreign minister attacked Assange, who had been charged with no crime. Assange was warned that the Swedish intelligence service, SAPO, had been told by its U.S. counterparts that U.S.-Sweden intelligence-sharing arrangements would be 'cut off' if Sweden sheltered him."

Although the Swedish investigation has now been dropped, the threat of arrest persists. The London police have indicated they will arrest Assange for failure to appear in a London Magistrates Court if he leaves the embassy. Britain would then likely extradite Assange to the United States for possible prosecution.

Attorney General Jeff Sessions declared in April that arresting Assange is a "priority" for the Department of Justice, even though the New York Times indicated that federal prosecutors are "skeptical that they could pursue the most serious charges, of espionage." The Justice Department is reportedly considering charging Assange with theft of government documents.

Related Topic(s): Assange; Asylum; Freedoms; Wikileaks, Add Tags
Add to My Group(s)
Go To Commenting
The views expressed herein are the sole responsibility of the author and do not necessarily reflect those of this website or its editors.