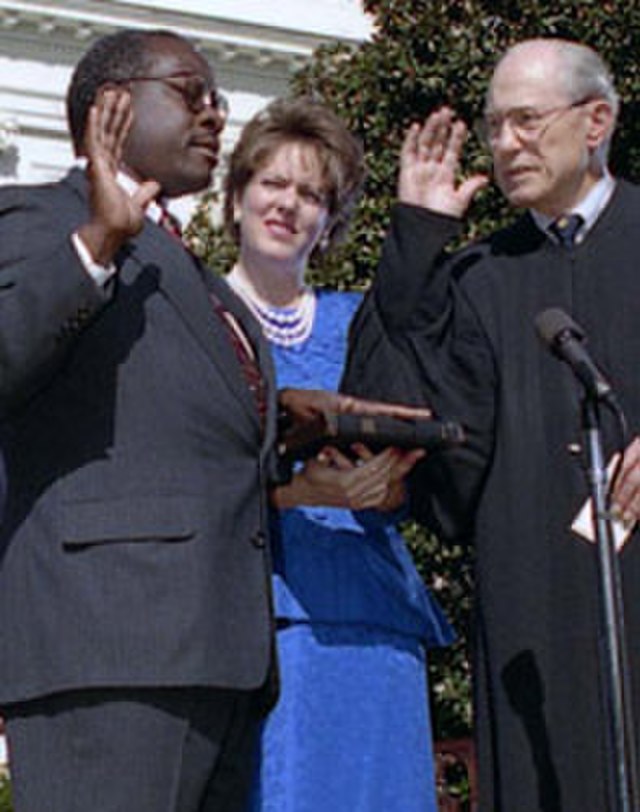 When Clarence Thomas was chairman of the Equal Employment Opportunity Commission, the federal agency that policed sexual harrassment, he took a fancy for his young assistant lawyer, Anita Hill. Acting on his desire, he asked her out on dates. When she repeatedly declined, expressing concerns about mixing work relationships with social ones, Clarence didn't stop, he changed tactics. He got her in private settings and began a campaign of seduction comprised of regaling her with "very vivid" desciptions of pornography he enjoyed, such as women having sex with animals, group sex, rape scenes, and persons with huge penises or breasts engaged in sex acts. And on the outside chance this was not sufficiently irresistable, he personalized it by assuring her of his own enormous penis size and talent at cunnilingus. Anita endured this and more for two years, not reporting it for fear of losing her job and career. Years later, in 1991 she confessed the truth to FBI agents conducting a background check for Thomas' appointment to the Supreme Court and was forced to testify when her testimony was leaked to the press, not unlike what compelled Christine Ford to speak out against Brett Kavanaugh.

In what has to be one of the lowest points in Senate history, an Alabama good-ole-boy Democrat broke the deplorable meter by asking the articulate, professional but traumatized Anita Hill insulting questions point blank: Are you a scorned woman? Do you have a militant attitude about civil rights? Do you have a martyr complex? to name just a few. For his part, Clarence Thomas set the gold standard as the outraged, scandalized paragon of virtue unjustly victimized by "a circus, a national disgrace, a high tech lynching for uppity blacks" - claims curiously echoed by "Bart" Kavanaugh with black lynching replaced by a Clinton hit job. Another telling parallel is Thomas's refusal to listen to Ms. Hill's testimony, just like Bart. Who would not want to hear the claims against them if they were innocent?

Anita Hill told the truth, just as Christine Ford did, provable by corroborating witnesses the Senate committee refused to allow to testify, just as they did with professor Ford.

"Justice" Thomas' immoral and degenerate character is proven three ways: first by his horrendous hypocrisy in leading the government's fight against sexual harassment while being one of its vilest practitioners; second by his bald-faced lying in categorically denying every word of Anita's testimony that he actually never heard; and third by brazenly playing the race card against a member of his own race, making Anita out to be part of a vicious Jim Crow conspiracy. Sound familiar?

By letting this kind of sick filth onto the Supreme Court, we should rightly expect supreme corruption to follow, as it inevitably did, in spades. Over the next 18 years, while consistently reaching for the bottom of how low the court would sink favoring money and power over people, "Injustice" Thomas groomed his ever-blushing bride Virginia to be a shameless Tea Party activist selling influence on the court, openly colluding with Citizens United, who ran attack ads against Clarence's opponents to his nomination, and culminating in a $500,000 dark money hooker's jackpot paid to "Ginni" the very same month her pimp husband sold out America with the misnamed Citizens United ruling that effectively ended fair democracy in favor of Corporations United. Notably, to impress his patrons Thomas actually wrote a dissent arguing the court didn't go far enough in allowing big money to buy candidates. This glaring conflict of interest remains an openly impeachable offense to this day.

That's what happened the last time we put a vicious pervert on our highest court. This time, the immoral, degenerate hearts of Trump's trash, their Republican enablers and billionaire handlers are all a-flutter with the breathtaking prospects for America's further destruction at the hands of their newest Injustice, Barfing Bart Kavanaugh, who passed on a first chance to rob some 70,000 Native Americans of their right to vote in North Dakota, but will no doubt show his quality soon.

A Lover of Truth in a dying world of Lies.

Khashoggi was not Strangled

Weisselberg Immunity Could Explode the Entire Hive of Trump Crime