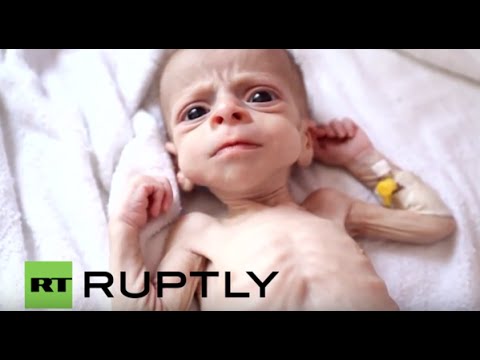 In a show of solidarity with Jared Kushner's best buddy, genocidal war criminal and psychotic sadist butcher Muhammed bin Salman, House Republicans voted Tuesday to continue bombing the Yemeni port of Hodeidah, cutting off all possibility of humanitarian food and medicine relief reaching 14 million Yemenis in a state of indescribable suffering from famine, guaranteeing the miserable death by starvation and cholera of thousands more helpless children until Democrats take over in January.

Representative Ro Khanna (D-CA) introduced a measure on Tuesday to stop support of the Saudi genocide which would effectively end the mass murder, triggering a guaranteed vote under the War Powers Act by privileged status based on Article 1 of the Constitution. As Ro explained, "By precedent, any member of congress can bring a War Powers resolution to force a vote on matters of war and peace, and the Congress has to allow a vote within 15 days."

Fearing that some Republicans might suffer a moment of human feeling, outgoing Rules Committee Chairman and Eagle Scout Pete Sessions (R-TX) along with Vice Chairman Tom Cole (R-OK), Liz Cheney (R-WY) and outspoken liar, child murder advocate and eager wolf killer Dan Newhouse (R-WA), among other Rules Committee members, imposed an unprecedented and blatantly unconstitutional rule to strip privileged status from Khanna's resolution and prohibit even its debate, by attaching a seemingly irrelevant but grotesquely opposite bill allowing the unrestricted killing of gray wolves by removing them from the endangered species list, a ploy cleverly designed to entice those wayward Republicans who might hesitate to endorse further mass murder of children with the irresistible prospect of mass murder of an endangered species, which of course they went for. Demonstrating his exquisite sensitivity to the 140+ Yemeni children dying a horrible death each day, Newhouse first told the giant lie that the US is not involved in Yemen, then complained that is was unfair to minimize the importance of managing wolf populations by bringing up genocide and it was unnecessary to "force" this issue on the nearly idle House Republicans when the Dems could just wait until January to deal with it.

In what is surely one of those amazing accidental coincidences, Saudi American journalist Khashoggi's last writing was a vigorous criticism of the Yemen massacre, just before he was cut apart alive with a bone saw by Mohammed bin Salman's doctor-led hit team grooving to iTunes.

A Lover of Truth in a dying world of Lies.

Khashoggi was not Strangled

Weisselberg Immunity Could Explode the Entire Hive of Trump Crime