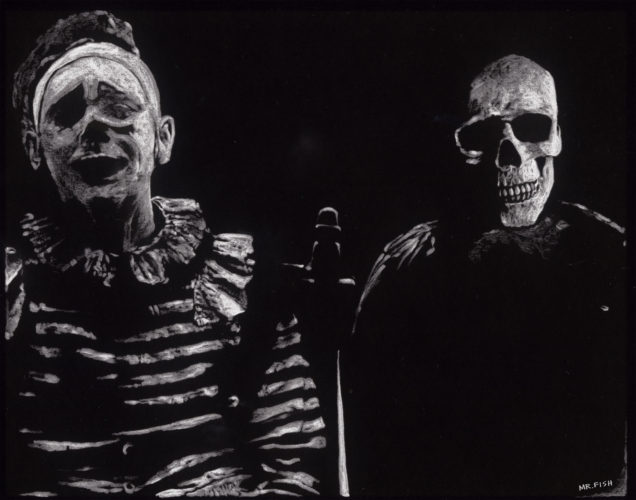 There is nothing new to our story. The flagrant lies and imbecilities of the inept and corrupt leader. The inability to halt the costly, endless wars and curb the gargantuan expenditures on the military. The looting of a beleaguered populace by the rich. The destruction of the ecosystem. The decay and abandonment of a once-efficient infrastructure. The implosion of the institutions, from education to diplomacy, that sustain a functioning state. The world has seen it before. It is the familiar disease of the end of a civilization. At first it is grimly entertaining, even amid the mounting suffering. But no one will be laughing at the end.

Human nature does not change. It follows its familiar and cyclical patterns. Yes, this time, when we go down, the whole planet will go with us. But until then we will be mesmerized by fools and con artists. What are demagogues like Donald Trump and Boris Johnson, positive psychologists and Candide-like prognosticators such as Steven Pinker other than charlatans who insist the tragedy facing us is not real? What are the technocrats and scientists arguing that education and Western civilization can turn us into rational beings other than shamans? What are the corporate titans who make their fortunes off the arms, chemical, fossil fuel and animal agriculture industries that are destroying the natural world other than high priests demanding human sacrifice?

There is one human story. Dressed in new clothing and using new tools, we endlessly relive it. If we still read philosophy, literature, history, poetry and theology we would not be surprised that greed, hedonism and hubris have easily defeated empathy and reason. But because we do not, because we spend hours each day getting little bursts of dopamine from electronic screens, we think we are unique in human existence. We are unable to see that the climate conditions that allowed civilizations to flourish during the last 10,000 years will soon be replaced by a savage struggle to survive.

Human beings have inhabited the planet for about 200,000 of its 4.5 billion years. For most of those 200,000 years, humans did not radically alter the ecosystem. But the Industrial Revolution, which began about two and a half centuries ago, saw human beings extract fossil fuels, tapping into a hundred million years of sunlight stored in the form of coal and petroleum. The energy from fossil fuels provided unparalleled wealth and military superiority to the planet's industrialized north, which used its power to subjugate most of the rest of the globe to cheaply extract resources and abuse cheap labor. The human population rapidly climbed to over 7 billion. The air, water and ice have seriously degraded under the onslaught as the planet shifts from one climate to another, a climate that will no longer be hospitable to human habitation.

The only existential question left is how we will choose to wait out the finale. But to pose that question is to defy the cultural mania for hope, the yearning for collective self-delusion. If reality is grim, you banish it. You invent impossible scenarios of inevitable salvation. Which explains how we ended up where we are.

Most of the climate activists and operatives of democracy see themselves, like the wider consumer culture, as being in the business of selling hope. Without hope, they argue, people would succumb to despair. People would not resist the looming catastrophe. Of course, the opposite is true. Hope, or rather false hope, exacerbates despair and lethargy. It infantilizes the population. Carbon emissions may continue to rise, the polar ice caps may continue to melt, crop yields may continue to decline, the world's forests may continue to burn, coastal cities may continue to sink under rising seas and droughts may continue to wipe out fertile farmlands, but the messiahs of hope assure us that all will be right in the end. Only it won't. We will not be able to adapt. Those who sell you the false hope that we can adapt are as self-deluded as those who brand global warming a hoax. And, at least subconsciously, many people know it.

The longer we publicly deny the bleak reality before us and privately cope with our existential dread and pain, the more crippling despair becomes. This schizophrenic existence is a form of emotional abuse. It is imposed on us by a dominant culture that will not allow us to speak this tragic truth. This censorship forces us to struggle with reality in solitude, eroding our confidence in our perceptions and judgments.

Andrea Dworkin in her essay "A Battered Wife Survives" wrote of effects of sustained abuse, saying that "one's mind is shattered slowly over time, splintered into a thousand pieces. The mind is slowly submerged in chaos and despair, buried broken and barely alive in an impenetrable womb of isolation. This isolation is so absolute, so killing, so morbid, so malignant and devouring that there is nothing in one's life but it, it. One is entirely shrouded in a loneliness that no earthquake could move."

She went on to ask "What is reality?" and then answered.

"The woman who was a battered wife and has escaped knows the answer: reality is when something is happening to you and you know it and can say it and when you say it other people understand what you mean and believe you. That is reality, and the battered wife, imprisoned alone in a nightmare that is happening to her, has lost it and cannot find it anywhere."

Compared with the earth, none of us are around for very long. We are, to the cosmos, ephemerons. Our little lives blink on for a moment and then go dark. Nothing truly important can be achieved in a single lifetime. We must work toward something greater than ourselves. We must live fully, as Dworkin did, by summoning the courage to confront the starkness of the human condition and demanding justice, not because it will be achieved, since in its perfect form it will never be achieved, but because it defines us as distinct and sentient individuals. Justice cannot be fought for in the abstract. It must be grounded in a concrete confrontation with power -- which is almost always embedded in white, male patriarchy -- on behalf of the oppressed. This means sustained acts of defiance and civil disobedience that shut down city roads, airports and pipelines. Corporate capitalism and imperialism, which created the ecological debacle, will be destroyed or these forces will kill us in an unprecedented global genocide.

"The struggle for climate justice is a struggle at the crossroads of historic and present injustices and a looming disaster that will prove to be, if allowed to unfold unchecked, the mother of all injustices," writes Wen Stephenson. "Because the disaster that is unfolding now will not only compound the suffering of those already oppressed (indeed, is already compounding it); it may very well foreclose any hope of economic stability and social justice for current and future generations. Why, then, does the term 'climate justice' barely register in the American conversation about climate change? Lurking in that question is a tension at the heart of the climate struggle: a tension between the 'mainstream' climate movement (dominated by largely white, well-funded, and Washington-focused green NGOs) and those -- most often people of color -- who have been fighting for social and environmental justice for decades."

Resistance grounded in action is its own raison d'être. It is catharsis. It brings us into a community with others who are coping with the darkness by naming it but refusing to submit to it. And in that act of resistance we find emotional wholeness, genuine hope and even euphoria, if not an ultimate victory.

"The certitude that there is no salvation is a form of salvation, in fact is salvation," wrote E.M. Cioran. "Starting from here, one might organize our own life as well as construct a philosophy of history: the insoluble as solution, as the only way out."

Related Topic(s): Future; Human Rights Violations; Humanities; Psychologists; Resistance; Tyranny, Add Tags
Add to My Group(s)
Go To Commenting
The views expressed herein are the sole responsibility of the author and do not necessarily reflect those of this website or its editors.