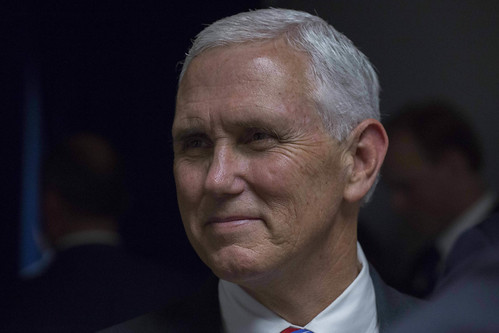 YEARS AGO, when I was a member of the Knesset, I decided to stage a demonstration in the plenum hall.

I put on a T-shirt with the slogan "Peace is greater than Greater Israel." In the middle of the debate I took my jacket off, displaying the slogan.

After a few minutes, an usher approached me and said politely: "The Speaker would like to see you in his office."

The speaker was Yitzhak Shamir, a former commander of the Lehi terrorist underground. He received me with a broad smile, asked me to be seated and said: "Uri, you have made your point. Now I ask you to take the t-shirt off and return to your seat!" Of course I did so.

I remembered this small incident this week, when something much more serious happened in the Knesset.

THE AMERICAN vice president honored Israel with a visit and was received like a king.

Why? Don't know. To my mind, the man is a good-looking and well-dressed fool. Wherever he stopped, he made speeches that should have made even ardent Zionists blush. He lauded Israel in terms of childish adulation, heaping shameless flattery upon fake history.

Official Israel was ecstatic. No one reminded the public that the extreme Christian evangelism espoused by Pence has an unhappy end. It says that after all the Jews have gathered in the Holy Land, Christ will return to earth and all the Jews will convert to his religion. Those who don't will perish.

The high point of the visit was Pence's speech in the Knesset plenum. This in itself was curious. Such honors are reserved for foreign heads of state. Pence, as a mere vice, had no such right. But the Israeli government was set to flatter the man, who might one day become president himself.

(Actually, the only reason I can imagine for not throwing Donald Trump out is the frightening idea that Pence will become president.)

As a former Knesset member I was invited to be seated in the Plenum hall on this occasion, but of course I declined the honor. What followed was shameful.

When the vice president started to utter his chain of flatteries, the members jumped up and gave him a wild standing ovation. This was repeated again and again, up and down, up and down, and looked both ridiculous and disgusting.

Contrary to the US congress, the Knesset does not allow applause. In all my 10 years as a member, during which I attended every single session, I don't remember a single hand-clap, not to mention multiple standing ovations.

After the guest's speech, representatives of the parties had the right to respond. All the Jewish parties lauded the American politician wholeheartedly. No difference between coalition and opposition.

Related Topic(s): Immigrants; Israel; Knesset; Parliament; Speeches; Vice President Pence; Zionists, Add Tags
Add to My Group(s)
Go To Commenting
The views expressed herein are the sole responsibility of the author and do not necessarily reflect those of this website or its editors.