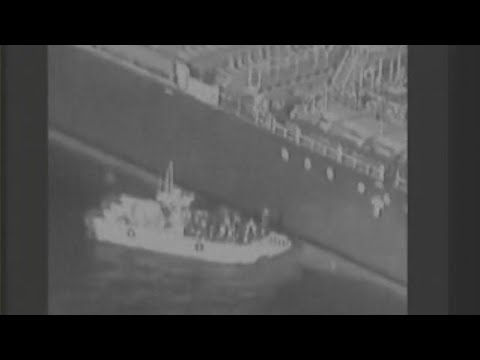 Video purports to show Iran removing ship mine The U.S. military on Friday released a video it said showed Iran's Revolutionary Guard removing an unexploded limpet mine from one of the oil tankers targeted ...
(Image by YouTube, Channel: Associated Press)   Details   DMCA
The Pentagon recently presented fake news, Regarding the doings of Iran Navy crews, Who took down a wreath attached to a tanker, Which in the Oman rode peaceful at anchor. Yes, a "wreath," which is no B.S. from a ninny, For here's the real scoop, the lowdown on the skinny. . You know how these sailors have a babe in all ports? Well, in these times of e'galite' of all sorts, Turns out Filipino met a Guard from Iran, And they hit it off as two handsome guys can. So the Fil docking Gulf-side, they set every sail, And did what they did, not to enter detail. . But you know how things go: the Rev Guard got pissed, When he found out he was one more on a list, And sent the Filipin' a blistering Dear John, This by text message into the ether and yon, Picked off by those swift guys at our NSA, Who laughed their ass off, saying "This makes our day!" . Yet love sprang anew when the Fil's ship returned, And the Guard repented and for old love yearned, So in dark of night he slipped out of the port, And hung on the ship's side a wreath of love's sort, Sending the Filipino a message anew: "On that starboard side, babe, there's something for you." . By now the NSA guys were rolling on floor, And someone called Centcom and said with a roar, "Get eyes on that starboard and don't give me crap, The brass wants to see it, so let's see it ASAP!" 'Round screens staff gathered as the chopper flew near, "It's solid red roses!" and they toasted with beer. . Yelled and drank, that is, till in walked a three-star, And asked impolitely why this seemed a bar, But those techies were smooth as techies can be, And quick blurred the big screen before telling he, A limpet they'd found that had blown a mere poof. "Look, they're removing it 'cause they know it's proof!" . Alas, port guards had seen the lover's return, And in the brig thrown him for a seven-month burn, And sent men to the symbol of roses to grab, Do it damn fast before the gossips could gab, So now we behold the good work that all did: Iran kept its rep and the Yanks got their vid.

Related Topic(s): Iran; Iranian Navy; Scoop, Add Tags
Add to My Group(s)
Go To Commenting
The views expressed herein are the sole responsibility of the author and do not necessarily reflect those of this website or its editors.