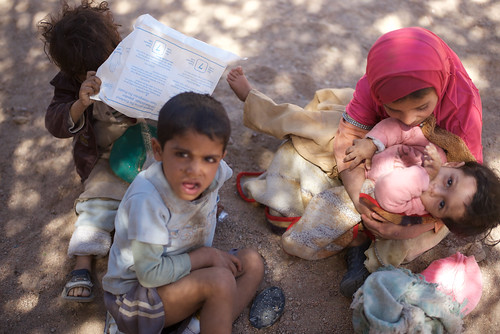 So here we are. The Saudis -- their brutal aggression armed, funded and guided with "target intelligence" by the United States and Great Britain -- have finally begun their assault on the Yemeni port of Hodeidah. This is where almost all humanitarian aid -- and indeed, 70 percent of the nation's food, medicine and other supplies -- enter Yemen. The assault on the port -- which has suffered from partial blockades supported by the US and UK -- will plunge millions into famine and likely lead to at least 250,000 deaths in the short run, according to the UN. This, in addition to the many thousands who have already died of famine, epidemic, bombing and lack of medical care throughout the three-year storm of carnage.

The Saudi attack has been a monstrous war crime since its beginning. It was approved and assisted at every step for two years by President Barack Obama; it simply could not have happened without him. Obama's policies of arming, funding, guiding and -- on occasion -- directly participating in the Saudi invasion have been carried on, and extended, by Donald Trump, who has launched more direct military incursions and bombings in Yemen.

Trump's involvement has bestirred a bit of criticism from Democrats who, with very few exceptions, did not raise the slightest objection to Obama joining extremist religious tyrants in invading a foreign country and driving its people into starvation and ruin. And you will search high and low in what is laughingly called the "liberal media" -- MSNBC, CNN, the NYT, the WP and the gaggle of comedy TV hosts whose smarmy, shallow "hot takes" have somehow become the vanguard of "Resistance" -- without finding any critique (or even acknowledgement) of the direct, personal complicity of Obama and the Democratic "foreign policy establishment" in this wanton act of mass murder.

The Saudis invaded Yemen to restore a puppet leader who had been "elected" in a vote in which only one candidate was allowed to run -- the candidate backed by the Saudis and the Obama administration. The Saudi-US-UK attack also saved Al Qaeda in Yemen. The terrorist group was nearing defeat at the hands of the Houthi rebels; the Saudi invasion battered and diverted the rebel effort, allowing Al Qaeda to thrive in the region once more. It also allowed ISIS to gain a foothold in Yemen for the first time.

The origins and context of the war -- much less the absolutely critical role played by the US and UK -- are almost never mentioned in the Anglo-American media. In fact, the war itself is rarely mentioned, despite it being what the UN calls "the largest humanitarian disaster in the world." There is the occasional story about the "Saudi-led coalition" in action and, even more rarely, a piece about the horrendous human suffering in Yemen. For example, the NYT ran a long, admirably detailed piece on the catastrophic plight of ordinary Yemeni people caught in the crossfire of war. But as I noted at the time:

"It also leaves out the bombing raids and ground raids being carried out directly by US forces in Yemen, ostensibly against ISIS and al Qaeda. Here another fact is politely set aside: the fact that the US-Saudi war has vastly increased the power and reach of ISIS and al Qaeda in Yemen. The Yemen forces now under attack by the Saudis were sworn enemies of the extremists, and had pounded al Qaeda to a small remnant -- until the US/UK and the Saudis stepped in and drove them back. ISIS had almost no presence in Yemen before the war. Now, both groups are flourishing mightily in the chaos, with their enemies being devastated by the US/Saudi assault."

Two other details were lacking as well. You can read the whole long story and not see a single mention of Donald Trump or Barack Obama. The latter put the full weight of the US behind this war of aggression to install a puppet leader, while the former has expanded US involvement with more ground troops and many more air attacks, most of them blunderbuss bombings which have killed many civilians. So yes, the story does provide some moving detail about the human suffering being caused by the war; but the eminently savvy and well-informed readers of the New York Times could walk away from the story without the slightest clue of their own government's direct and deep complicity in this humanitarian crisis.

This remarkable myopia continues today. On Wednesday, the Guardian ran a story (linked aobon the new assault on Hodeidah. It is not a bad story, as such things go, for it does include extensive quotes from figures opposed to the attack, including this withering blast of truth from a former Conservative minister:

"The former Conservative international development secretary Andrew Mitchell accused the British government of being complicit in the attack, and said the UK was using its position on the UN security council to protect its ally Saudi Arabia. 'A decision has been made by Britain in relation to Saudi Arabia that security and commercial grounds trumps everything else. We are getting into a very difficult territory. We are part of a coalition that is besieging this country and creating famine. What happens when they have taken Hodeidah? There will be 1 million people that will need to be fed and watered and get medicine. They will not have a prayer of doing that. Britain will be complicit in that.'"

But the story perpetuates the idea that the US and Britain have little to do with the war -- in direct contradiction to the fact that the war would end tomorrow if the US and UK cut off the weapons and military assistance they are providing to the "Saudi-led coalition." The Guardian story speaks of frantic diplomatic efforts, "backed by Britain and the US," pleading with the Saudis to delay or call off the attack. Yet on the very same day, you could see this in the Wall Street Journal:

"The U.S. military is providing its Gulf allies with intelligence to fine-tune their list of airstrike targets in Yemen's most important port, one sign of the Trump administration's deepening role in a looming assault that the United Nations says could trigger a massive humanitarian crisis."

The Journal story details the "qualified support" Trump officials are giving to the assault on Hodeidah; i.e., go ahead and attack, but make sure you do some copious PR about "preserving the flow of humanitarian aid" and "commercial imports" while you're slaughtering people and cutting off the nation's lifeline.

Oddly enough, in a passage clearly intended to present US involvement in the most rosy light, the Journal tells us:

"The U.S. shares limited intelligence with the Saudi-led coalition, including information used to pinpoint hospitals, mosques, U.N. offices and other locations meant to be off-limits for airstrikes."

Yet we have seen story after story of the Saudis bombing hospitals, mosques, schools and other civilian targets with deadly, efficient accuracy. And this goes back to the halcyon days when the scandal-free Obama was in office. From Amnesty international in 2015:

"Saudi Arabia-led coalition forces have carried out a series of air strikes targeting schools that were still in use, in violation of international humanitarian law, and hampering access to education for thousands of Yemen's children, said Amnesty International in a new briefing published today. The coalition forces are armed by states including the USA and UK ...

"'The Saudi Arabia-led coalition launched a series of unlawful air strikes on schools being used for educational -- not for military -- purposes, a flagrant violation of the laws of war,' said Lama Fakih, Senior Crisis Advisor at Amnesty International who recently returned from Yemen.

"This was in the first few weeks of the war. Such attacks have been constant throughout the conflict. For example, in January 2017, two schools were bombed, including a school for blind children. Hospitals are routinely bombed as well. Weddings and funerals have also been frequent targets, with horrific slaughter of defenseless civilians. (Such as this one in April 2018.) As the Guardian notes, of 16,847 airstrikes against Yemen (as of April; there have been hundreds more since), at least one-third of them 'have hit non-military targets.'"

The attack on Hodeidah did bring more media attention to the Yemen slaughter and even a few whispers about the US participation in this war crime. The initial NYT story on the port assault seemed a bit less like transcription and almost like real reporting. It quotes some of the Democrats who have finally begun speaking against the Yemen war now that it can be tied to the loathed Republican president. We also get this very telling juxtaposition:

Related Topic(s): Bombing; Famine; Hell; Pentagon; Schools; Slaughter; Yemen Destruction, Add Tags
Add to My Group(s)
Go To Commenting
The views expressed herein are the sole responsibility of the author and do not necessarily reflect those of this website or its editors.