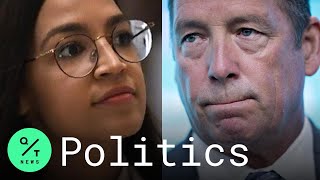 For as long as I can recall, I've been referring to people, usually men, who do and/or say dumb things as yohos. As in, "Rudy Giuliani, what a yoho!"

I'm not making this up and, until I Googled to my satisfaction, I was unaware that I was actually making the word up, at least as far as my definition of it. And I most certainly was not aware that there was a member of Congress who was actually called Mr. Yoho.

He's a Republican, of course. Ted Yoho. What a yoho.

Yoho is a 65-year-old veterinarian/businessman, who has managed to represent the Gainesville area of Florida for the past eight years without much national fanfare. Then he ran into Alexandria Ocasio-Cortez on the steps of the Capitol. Enter the yoho factor.

Getting involved in a public shouting match with a 30-year-old, first-term congresswoman from Queens who is already known nationally and everywhere on social media by the initials AOC is just dumb. It is also against the rules of civility by which members of the House of Representatives like to say they comport themselves when discussing issues. Doing it in front of a reporter for a news organization that covers Congress? Yoho.

The story in The Hill that grabbed national attention is that, following a heated exchange on the steps, in which he called her "disgusting" and "crazy," Yoho referred to Ocasio-Cortez as a "f****ng b*tch" as the two walked away from each other. She apparently did not hear the remark. A day after the story appeared, Yoho apologized on the floor of the House for his "abrupt" behavior, but denied using the vulgar insult attributed to him by the reporter. Yoho said he actually said "f****ng b****hit," referring to the congresswoman's views.

Yoho said it "is true that we disagree on policies and visions for America, but that does not mean we should be disrespectful." He also said, "I will commit to each of you that I will conduct myself from a place of passion and understanding that policy and political disagreement be vigorously debated with the knowledge that we approach the problems facing our nation with the betterment of the country in mind and the people we serve. I cannot apologize for my passion or for loving my God, my family and my country."

Occasio-Cortez responded on the House floor the next day, in a classic takedown, in effect calling Yoho's apology B.S. and an insult to all women. Republicans believed Yoho. Most of the rest of the world agreed with the reporter and AOC. That's kind of the problem with Republicans these days. They're convinced of their moral superiority and righteousness, but no one else is listening to them because no one believes them anymore. About anything.

As a fish rots from the head down, so has the GOP. Their leader is a bully, a liar and a misogynist and they know it. Rather than rise up in moral indignation, they have chosen for nearly four years to emulate or remain silent. A sincere apology on Yoho's part ("I said it in a fit of anger, but no excuses. I am embarrassed and sorry and regret any hurt I caused.") would have likely ended the story. But humility is not in the Republican playbook.

If you sense (correctly) that I'm believing the reporter's account, not Yoho's, that's because I honestly believe that any man who has lived five or six or more decades in this country can put himself in Yoho's situation at least once in his life. It happens. Denying or justifying it makes it much worse. Apologizing and looking for the source of the anger is much better.

It's the modern Republican Party's attitude towards accomplished women who don't come from wealth: Anti. Republicans also used to be Anti-deficits. Not so much anymore.