[Republished from the American Herald Tribune] 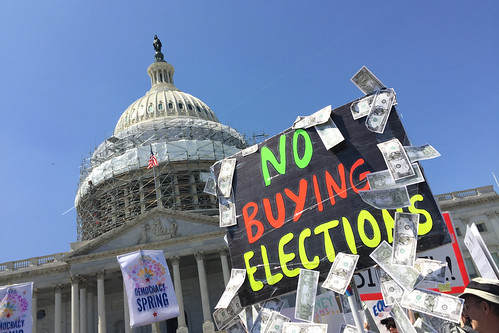 At first glance, Bernie Sanders appears to be the clear favorite in the 2020 Democratic Party primary. Even after Joe Biden's win in South Carolina, Bernie Sanders is poised for big success in the Super Tuesday states once the votes are tallied. However, there's a chance that none of it will matter. At the Nevada debate, MSNBC analyst and debate moderator Chuck Todd asked a pointed question: should the candidate with a plurality of delegates be the nominee, or should a contested election decide the fate of the nomination? All except Bernie Sanders affirmed their commitment to a contested convention. The return of the superdelegates is a forgone conclusion and this time, their intervention will determine the future of the Democratic Party.

Early in the primary, few asked the question as to why so many candidates had decided to run on the Democratic Party ticket. Some surmised that the Democratic Party establishment was simply unsure of its options. Others argued that the large number of candidates strengthened the case for democracy. Each of these assertions missed the mark. From the beginning the primary, the corporate donors in control of the party wanted the option of summoning the superdelegates to choose their preferred candidate.

What is unclear is whether the Democratic Party establishment understood just how formidable Sanders' 2020 campaign would be. Sanders has organized the most volunteers, received the most individual donations, and built the strongest campaign infrastructure compared to the other candidates. His appeal with Latino voters and millennials has infused the campaign with a steady dose of grassroots energy that none of his opponents possess. The Democratic Party establishment tried to minimize Sanders' victories in Iowa and New Hampshire but has been unable to stymie his momentum. The results of the Nevada caucus were a wakeup call to the superdelegates that perhaps not even Mike Bloomberg's billions of dollars can stop a Sanders nomination.

The superdelegates are nearly unanimous in their hatred of Bernie Sanders. In a recent New York Times interview of ninety-three Super Delegates, only nine said that Sanders should be the nominee if he comes to the convention with a plurality rather than a majority of delegates. Former Obama adviser Aton Gunn stated plainly on MSNBC that the party chooses the nominee, not the public. Bernie Sanders' supporters are threatening rebellion against the DNC if the nomination is stolen from him. The stage is set for the superdelegates to not only determine the 2020 presidential nominee, but also the future of the Democratic Party itself.

In the 2016 primary, the superdelegates were decisive in giving Hillary Clinton an early advantage in the contest against Bernie Sanders. Superdelegates, now called "automatic delegates" after rule changes enacted by the DNC in 2017, are primarily party insiders who possess a vested interest in maintaining the status quo. According to The Intercept, many superdelegates work directly for presidential campaigns and have connections to the healthcare, financial, and defense industries. Former Tennessee lawmaker William Owen is a lobbyist who owns two firms, Asset and Equity Corporations and Klox Technologies. Owens has donated to Republican majority leader Mitch McConnell and dozens of other Republicans.

Superdelegates such as Owen view Bernie Sanders as an existential threat to their for-profit interests. Unlike the 2016 election, the superdelegates will have to wait until the Democratic National Convention to exert the full influence on the nomination of the Democratic Party presidential candidate. And the process could get ugly, and fast. The DNC appears fully committed to rejecting the wishes of the most energetic and politically left section of its base. Sanders is likely to show up to the convention in July with most delegates, but it is unlikely he will possess a majority. A contested convention would be set into motion where the superdelegates could vote on their most preferred nominee and that person certainly won't be Bernie Sanders.

Such an outcome raises the very real possibility of a complete split of the Democratic Party. This isn't necessarily a bad thing. For decades, progressive and left constituencies have remained loyal to the Democratic Party without anything to show for it. Wages remain stagnant, unions have been decimated, and the triple evils of racism, capitalism, and militarism have wreaked havoc on Black America and the Latino community. Michael Bloomberg's presidential candidacy is a microcosm of the Democratic Party as a whole. "Democracy" is for sale, and the Democratic Party is willing to align with the highest billionaire bidders if the price is right.

The more working-class people in the U.S. learn that neither party in the duopoly is interested in democracy, the brighter the future becomes. Democracy in the U.S. has always secured free-market freedoms for the rich and an oligarchy of poverty for the poor and the oppressed. Only by terrorizing and plundering the planet was the rich able to convince large portions of the U.S. population that its government stood as a beacon of democracy for the rest of the world. The potential splintering of the Democratic Party also holds historic significance for this very important political moment. Progressive and left-leaning constituencies such as Black Americans and unionized workers have largely retained their loyalty to the Democratic Party out of fear of the Republican Party's openly rightwing agenda. The DNC's anti-Bernie political line may drive millennial voters and young people of color from the party and open the possibility for a new political formation to develop.

Related Topic(s): Democratic National Convention; Democratic Party; Democratic Sellout, Add Tags
Add to My Group(s)
Go To Commenting
The views expressed herein are the sole responsibility of the author and do not necessarily reflect those of this website or its editors.