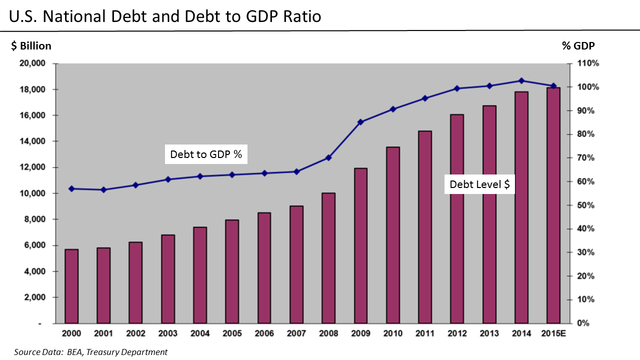 In 2015, Congress temporarily did away with the US government's fictional "debt limit." I call that limit fictional because it's not really a limit. Every time the government gets close to it, Congress raises it. It's as if signs on the highway changed to display a number five miles higher every time you got within a mile of the existing "speed limit." So anyway, Congress decided to stop pretending the limit actually exists, through March 15 of this year.

After that? The Congressional Budget Office forecasts that the government can continue to operate until this fall without busting the new debt limit, but US Treasury Secretary Steve Mnuchin is already asking Congress to raise it ASAP.

I've got a better idea: This time, Congress should refuse to increase the debt limit, and in fact should provide for that limit to automatically decrease as the existing debt (now closing in on $20 trillion) is paid down.

As of 2014, government spending came to more than 40% of the country's Gross Domestic Product annually. Yes, you read that right: American politicians spend 40 cents from every dollar of wealth created in our economy.

About 25% of that looting is overt taxation. The other 15% is borrowed. Borrowing is just deferred taxation. Those who loan American politicians money are told -- and believe -- that for every dollar it borrows, the US government will find a way to take a dollar, plus interest, out of your hide at some point in the future.

The politicians are spending all of the money they directly pick out of our pockets. Then they're borrowing more and pretending we're their co-signers.

If a regular person ends up in deep debt, he knows that the very first step to getting out of the hole is to cut up the credit cards and stop borrowing money.

Supporters of continuously growing government debt try to make the matter seem more complicated for Congress than it is for you or me. In reality, it is exactly as simple. The first step is to stop the borrowing.

And after the borrowing stops? Well, there's always bankruptcy -- repudiation of the debt in its entirety -- or, as president Donald Trump suggested during his campaign, at least negotiating with creditors to settle for less than the government owes.

Sooner or later, the borrowing IS going to end. It can end with fiscal discipline or it can end with political and economic disaster. Your call, Congress.

Related Topic(s): National Debt; Steve Mnuchin, Add Tags
Add to My Group(s)
Go To Commenting
The views expressed herein are the sole responsibility of the author and do not necessarily reflect those of this website or its editors.