Click Here to Remove All Ads
The FDR Library Revisited 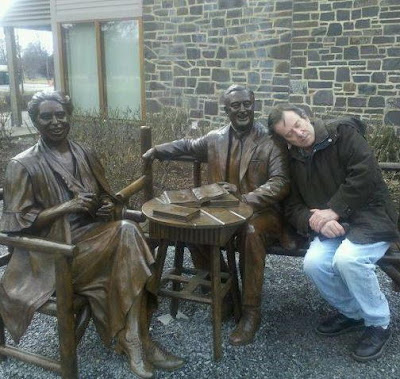 -Franklin D. Roosevelt, during the 1936 campaign

As I've written before on my blog (that electronic trash bin of Left Wing propaganda) about the occasional pilgrimages I make to the Franklin Delano Roosevelt Library and Museum in Hyde Park, NY. I find the place therapeutic. Whenever I get to feeling depressed about this country (which is on ly when I am not sound asleep and not intoxicated) I tell myself that I need to visi t there. Fortunately I live slightly less than forty miles from the place so getting there is not as time-consuming a prospect for me as it might be for you. I took yet another of many trips there on Saturday the eleventh of February. This time I brought along my friend Lori DeGeorge. It had the desired effect. When the time came to leave I was feeling much better about America than I was feeling when I walked in.

Here are two brief paragraphs from a piece I wrote in 2007: 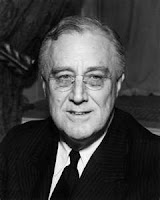 (Image by Unknown Owner)   Details   DMCA
I
It was was said "It was said of him at the time of his death on April 12, 1945, 'Although he never regained the use of his legs - much as he wanted to; much as he tried - he taught a crippled nation how to walk again.'

He was the pampered son of privilege from Hyde Park, NY whose battle with polio, begun in the summer of 1921, ingrained into his soul a deep and abiding empathy for the suffering of others that had previously been somewhat lacking in him. Through the development of a series of radical, revolutionary programs - unparalleled in history - which his administration brought into the main stream of American social engineering, he was able to usher millions of regular people into the ranks of a middle class that had not even existed before he took the oath of office on March 4, 1933. It is now almost a cliche but it is as true as the rising sun: He saved capitalism by 'tempering its excesses.' The people would elect him to an unprecedented four terms. Franklin Delano Roosevelt was - beyond a doubt - the greatest president in American history."

My opinions of the man and his presidency have not altered a molecule since I wrote those words five years ago. If anything they have only been strengthened. H e was as good as they get. When he died someone remarked th at a century into th e future, people would get down on their knees and thank God for Franklin D. Roosevelt. I can't speak for the people of 2045, but si xty-seven years after his passing - two thirds of a century - this person is very gra teful indeed. And take into consideration that I didn't even live through that era. When I was born he had been dead for thirteen years. 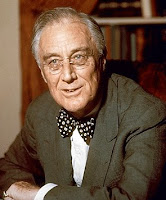 (Image by Unknown Owner)   Details   DMCA
And he has been gone for a very long time. My mother will be eighty-one on August fifth. On the day Franklin Roosevelt died she was not yet in high school. Maybe that is related to the reason why the legacy of the New De al is on life support these days. There aren't many people alive today who remember what life was like in the United States before FDR - and those who do remember were mere toddlers when the stock market crashed in October of 1929. It has been said that those who refuse to remember their history are doomed to repeat it. It's so true . Just look out your window onto America's economic landscape. It was never supposed to get like this again. Why did it? What happened?

The people of this country forgot about Franklin Delano Roosevelt. That's what happened . Show most Americans a photograph of his smiling face and they will not even be able to identify him. That's gratitude for you! And if the spin doctors for the plutocracy have their way, his name (and good works) will be eradicated from America's consciousness forever.

They've already started with their onslaught of lies and misinformation. Since there are few left who remember and loved the living, breathing FDR, and who can attest to what he meant to the working people of the United States, now is the perfect time for the far right to commence with the assassination of his character - to demean everything he ever stood for; in other words: progressive policies . It is now a common right wing tactical talking point to preface the term "New Deal" by using words such as "the fail ure of" or "the disastrous". It's start ing to work, too. There are people out there who see President Roosevelt, not as being the architect of a new American social structure, but rather as a contemporary of John Dillinger. 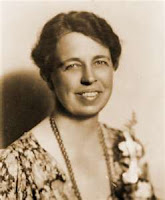 (Image by Unknown Owner)   Details   DMCA
Another curious point of emphasis the conservatives love to scream about is the fact that Franklin Roosevelt didn't quite champion the cause of African Americans during the years he lived in the White House - as if Herbert Hoover ever d id! While it can't be denied that Roosevelt was fairly passive publicly on the issue of civil rights, privately it was another matter. What should not be forgotten is all of the good work his wife did for the cause of racial understanding during those twelve years. It can be said without a hint of exaggeration that up to that time, Eleanor Roosevelt did more for the rights of black people in this country than any and every president since Abraham Lincoln. And she did it all with her husband's blessings. They each had differing and well-defined roles to play. He was the pragmatic politician. She was America's heart and conscience. Each played their respective role masterfully - if not always to perfection.

Of course, had I been elected president in 1932, I would not have been as passive as Roosevelt was with regard to the equal rights of all Americans. I would have been out in the national spotlight demanding an end to racial segregation everywhere . The only problem is that I would have been a one term president (that's assuming I wouldn't have been impeached - or lynched ). Back in those days the Democratic party was chock-full of racist Dixiecrats. A generation later they would flee - like diseased rats - into the loving arms of the GOP.

It's sad to say, but the world Franklin Roosevelt inhabited was not the same one that President Lyndon Johnson encountered thirty years later. The Voting and Civil Rights Acts could not have been passed in the thirties and forties - and it is sheer folly f or anyone to suggest (as some have) that he could have done so. He couldn't even get a federal ant i-lynching law passed. The proposed bill was killed in the senate. But While Franklin might have appeared passive, with his quiet encouragement Eleanor was helping pave the road to equality in this country. It's a road that still has more-than-a-few miles of paving left to go.

The Civil Rights Movement in America was born on April 9, 1939 - Easter Sunday. That was the day that Mrs. Roosevelt made the arrangements to have African American contralto Marian Anderson perform a concert at the steps of the Lincoln Memorial after the Daughters of the American Revolution denied her the chance to sing at Constitution Hall because of the color of her skin. Eleanor Roosevelt, a life-long member of the DAR, resigned in disgust at that moment. I hate to do this to you again but I need to quote something else I wrote a few years ago: 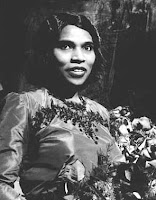 (Image by Unknown Owner)   Details   DMCA
Almost everyone is under the impression that the modern civil rights movement began on that December afternoon in 1955 when an exhausted Rosa Parks refused to give up her seat on a Montgomery, Alabama bus to a white man. They're off by almost seventeen years. December 1, 1955 merely marked the day the child went out into the world for the very first time. April 9, 1939 was the moment she breathed her first breath. "

Tom Degan is a former Green Party candidate for New York State Senate. He writes on a blogsite called, The Rant by Tom Degan. He is the recipient of the Presidential Medal of Freedom.....Okay, he didn't really receive the Presidential Medal of (more...)
Related Topic(s): Democrat; Library Of Congress; People; Revolution; Segregation, Add Tags
Add to My Group(s)
Go To Commenting
The views expressed herein are the sole responsibility of the author and do not necessarily reflect those of this website or its editors.