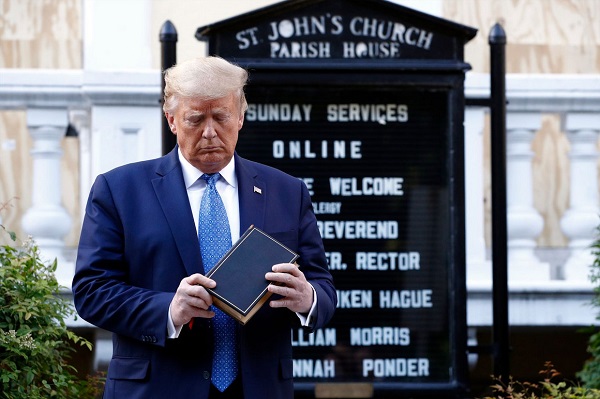 Today's New York Times headline boldly exclaimed, "PRESIDENT IS 'NOT ABOVE THE LAW,' JUSTICES DECIDE." But then the Supreme Court majority found a way not to apply the law to Trump's defiance of Congress.

Didn't this question get decided in 1776 and more formally in 1787 by our Founders?

In obtaining information for overseeing the Executive Branch, the plenary power of Congress neither needs affirmation by the courts nor can tolerate years of judicial delays. It is time for the illogical Justices, who find few limits to vast Presidential powers either domestically or in pursuit of undeclared wars of Empire, to stop shredding Congress's constitutional authority.

The very conservative Justice Clarence Thomas, in his dissent, addressed the futility of Congress employing the courts to obtain information by subpoena for legislation, for example, strengthening the President's financial disclosure obligations. The maximum congressional strategy for securing presidential documents is through the use of its impeachment authority, he wrote.

An article of impeachment was voted against President Nixon in 1974 for defying a congressional subpoena that was not validated by a court. Trump has defied scores of subpoenas, dozens of formal Congressional demands for information and testimony by Executive Branch officials. Yet, apart from the Ukraine impeachment in December 2019 by the Democratic House, Speaker Nancy Pelosi has kept eleven other serious ongoing impeachable offenses by Trump and his lawless regime on the shelf. You can read these impeachable offenses compiled by constitutional law experts, Bruce Fein, Louis Fisher, and me, and presented by Congressman John Larson (D-CT) in the December 18, 2019, Congressional Record H-12197.

Absent a robust defense of our democracy by the Supreme Court or Congress, the citizenry must mobilize a mass demand for Trump's resignation - for all of America's sake. Whether the case is made for the rule of law or against disastrous, dangerous, and delusionary policies from Trump's Wall Street over Main Street White House, the support should be treated as non-partisan and as the essence of patriotism.

On June 5, 2020, the Portland (Maine) Press Herald called for Trump to resign, urging Trump to ask himself - "Can the country take five more months like the last five?" The editorial asserted that "your shortcomings are unleashing historic levels of suffering on the American people."

When this staid newspaper took this position, it did not evaluate the prospect of success. That is not its responsibility. Nor should any such prejudgment of Trump's rejection of resignation inhibit hundreds of Congressional lawmakers, civic group leaders, columnists, and editorial writers, who have made the overwhelming case against corrupt Donald Trump in great documented detail. But, unfortunately, most of these people have failed to reach the obvious conclusion from their convictions.

The case for Trump's resignation should never be withheld by weighing the odds of that happening. The demand itself is the necessity of our times. Here are some reasons:

1. Trump's ignorance and ego-driven bungling and obstructions of professional scientific management of the Covid-19 pandemic occur daily and often in open sight. After weeks of delay fatal to tens of thousands of Americans, his continuing abandonment of presidential leadership in assuring supplies, facilities and critical coordination for the states warrant removal of this flailing, failing, careening so-called chief executive. America cannot wait to stop the irreparable destruction that will occur from now until January 20, 2021.

2. The mass resignation demand highlights in an organized way the case for Trump's removal (supported by 60% of women in a November 26, 2019, CNN poll) that Congress possesses and has failed to pursue in both the House and Senate.

No one so guilty of violating the basic laws of our land, so corruptly selling our government to giant corporations while asking CEOs for campaign contributions should disgrace our White House any longer. Trump's increasingly shrill bigotry, pressing for selective voter intimidation and suppression, and incitements to violence illustrates what Alexander Hamilton meant by citing the "abuse of the public trust" as an impeachable offense.

3. The widespread discourse and debate pursuant to a mass resignation demand will highlight the specifics of Trump's damage to our country. He arbitrarily declares another "economic emergency" so as to make corporate crimes worse by literally stopping enforcement of consumer, worker, environmental and economic protections. Big corporations over people again.

The resignation demand highlights his abuses against women over the years, his regime's leaving young people defenseless against rapacious commercial universities and student loan exploiters, his support for freezing a $7.25 per hour federal minimum wage and other anti-worker slams that are all under-reported.