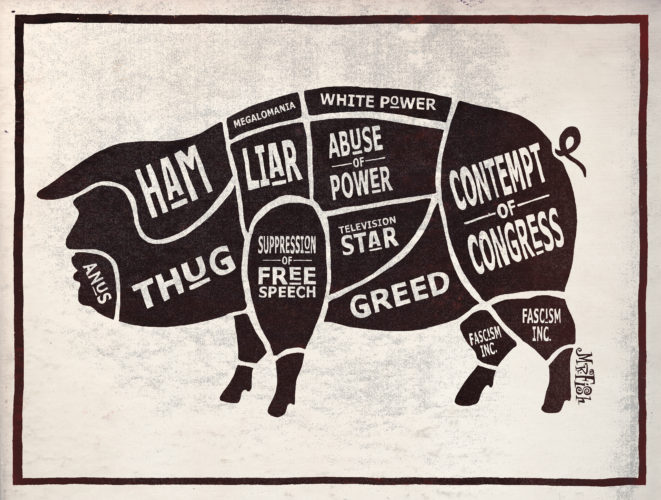 Bruce Fein, a former senior official in the Department of Justice and a constitutional scholar, has identified 12 impeachable offenses committed by Donald Trump. But, as he notes, many of these constitutional violations are not unique to the Trump administration. They have been normalized by Democratic and Republican administrations. These long-standing violations are, for this reason, ignored by Democratic Party leaders seeking to impeach the president. They have chosen to focus exclusively on Trump's attempt to get the Ukrainian president to open an investigation of Joe Biden and his son, Hunter, in exchange for $400 million in U.S. military aid and a visit by the Ukrainian leader to the White House. Ignoring these institutionalized violations during the impeachment inquiry, Fein fears, would legitimate them and lead to the death of democracy.

In a letter on Friday to House Speaker Nancy Pelosi, also signed by Ralph Nader and Louis Fisher, Fein warns that Trump is "shattering our entire constitutional order." He lists as the president's most serious constitutional violations the "defiance of congressional subpoenas and oversight; spending billions of dollars on a southern border wall not appropriated for that purpose; continuing or expanding presidential wars not declared by Congress; exercising line-item veto power; flouting the Emoluments Clause; and, playing prosecutor, judge, jury, and executioner to kill any person on the planet based on secret, unsubstantiated information." But he also notes that many of these violations are not unique to Trump and were also carried out by Barack Obama and George W. Bush.

"Many of the Democrats in the past have been complicit in these violations," Fein said when I reached him by phone in Washington, D.C. "They have unclean hands. They have acquiesced in illegal surveillance, as revealed by Edward Snowden. The most serious constitutional violations are the ones that are institutional usurpations. These usurpations [by both parties] have permanently weakened, if not eviscerated, the power of the legislature versus the executive."

"We have a Congress whose members, by and large, do not want the responsibilities the Constitution entrusts them with," Fein continued. "They like to give away everything to the president and then clamor if something goes bad. The most worrisome constitutional violations are, unfortunately, ones many members of Congress rejoice in. It enables them to escape making hard choices that might compromise their ability to win reelection. But you can't rely on a past dereliction to justify its perpetuation indefinitely."

"If we take a narrow approach to impeachment, that will mean that all the more egregious violations will be viewed as having been endorsed and not rebuked and successive presidents will feel they have a green light to emulate Trump on everything except a Ukrainian shakedown," Fein said. "This is dangerous for the country. This could boomerang, even if we get rid of Trump, by endorsing these usurpations forever. This would be a return to a one-branch government like the monarchy we overthrew in 1776. The unwitting result is to further the [power of the] executive rather than diminish it, which is what should be happening."

Bush and Obama bequeathed to us nine illegal wars, if we include Yemen. None were declared by Congress, as is demanded by the Constitution. Bush placed the entire U.S. public under government surveillance in direct violation of the Fourth Amendment and the Foreign Intelligence Surveillance Act (FISA), which makes it a crime for the government to surveil any American citizen without authorization by statute. Under the Executive Order 10333 the president spies on Americans as if they were foreigners, although this surveillance has not been authorized by statute. Bush embarked on a global program of kidnapping and torture, including of foreign nationals, which Obama continued. Bush and Obama carried out targeted assassinations, usually by militarized drones, across the globe. And Obama, reinterpreting the 2002 Authorization for Use of Military Force Act, gave the executive branch the authority to assassinate U.S. citizens. The killings began with drone strikes on the radical cleric Anwar al-Awlaki and, two weeks later, his 16-year-old son. Such a violation denies U.S. citizens due process. By signing into law Section 1021 of the National Defense Authorization Act, Obama -- whose record on civil liberties is even more appalling than Bush's gutted the 1878 Posse Comitatus Act, which prohibits the use of the military as a domestic police force.

These two presidents, like Trump, violated treaty clauses that required Senate ratification. Obama did this when he signed the Iran nuclear deal and Trump did this when he walked away from the deal. Bush and Obama, like Trump, violated the appointments clause of the Constitution by appointing people who were never confirmed by the Senate as required. The three presidents, to override Congress, all routinely abused their right to use executive orders.

At the same time the courts, a wholly owned subsidiary of corporate power, have transformed the electoral system into legalized bribery through the Citizens United ruling, handed down by the Supreme Court in 2010. Corporations pouring unlimited money into elections was interpreted by the court as the right to petition the government and a form of free speech, essentially overturning the people's rights by judicial fiat. Also, the courts have steadfastly refused to restore basic constitutional rights including our right to privacy and due process. "The constitutional rot is in all three branches," Fein said.

The 12 impeachable offenses committed by Trump and singled out by Fein are:

Trump made clear his contempt of Congress when he boasted, "... I have Article II, where I have the right to do whatever I want as president."

"President Trump has repeatedly and unconstitutionally systematically undermined the congressional oversight power, including the ongoing congressional impeachment inquiry of the President himself, by instructing numerous current and former White House staff and members of the executive branch to defy congressional subpoenas on an unprecedented scale far beyond any previous President," Fein wrote to Pelosi. "Without congressional authority, he has secretly deployed special forces abroad and employed secret guidelines for targeted killings, including American citizens, based on secret unsubstantiated information. He has unconstitutionally endeavored to block private persons or entities from responding to congressional requests or subpoenas for information, e.g., Deutsche Bank. He has refused to provide Congress information about nepotistic or other security clearances he granted in opposition to his own FBI security experts. He has refused to disclose his tax returns to the Chairman of the Ways and Means Committee contrary to a 1924 law, 26 U.S.C. 6103 (f)."

2. Abuse of the Powers of the President and Abuse of Public Trust

"Unlike prior presidents, he has made presidential lies as routine as the rising and setting of the sun, confounding civil discourse, truth and public trust," the memo to Pelosi reads. "He has disrespected, belittled, and serially preyed upon women, mocked the disabled, incited violence against the mainstream media and critics, and encouraged and displayed bigotry towards minorities and minority Members of Congress, including intercession with Israel in serious violation of the Speech or Debate Clause, Article I, section 6, clause 1, to deny two Members visitor visas."

Related Topic(s): Congress; Democratic; Impeachment; President; Rule Of Law; Violations, Add Tags
Add to My Group(s)
Go To Commenting
The views expressed herein are the sole responsibility of the author and do not necessarily reflect those of this website or its editors.