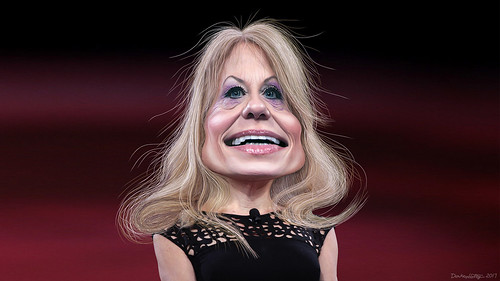 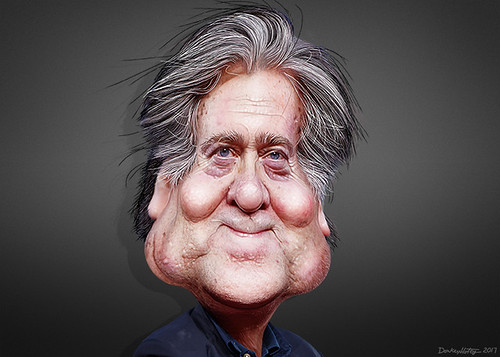 Steve Bannon was one of the principals in the Trump presidential campaign. With Kelly Ann (Alternative Facts) Conway (formerly a pollster, which could account for why she is such a lousy front-person for Trump) Bannon came over from the Ted Cruz campaign when it ended. Cruz had been funded by the far-right winger Robert Mercer, who brought his money with him to Trump. (Among other things, Mercer was also a funder of Brexit and climate change denial.) Bannon brought with him his concept of "The Deconstruction of the Administrative State." This was his fancy term for destroying as much of the Federal bureaucracy as possible, given that those particular pieces of the bureaucracy for which he advocated destruction stood in the way, in any way, of private profit-making. In this he was following in the steps of one Grover Norquist, an advisor to George W. Bush, who famously said "our objective is to shrink the Federal government to the size of a bath-tub and then drown it in the bath-tub."

Of course the elements of the Federal government which Bannon/Norquist (and just about the whole of the Republican Party since the time of Newt Gingrich, a Norquist devotee) were/are such elements as the Environmental Protection Administration, elements of the Department of Agriculture aimed at corporate farming (and pollution), the Department of Labor in general, the National Labor Relations Board, the Department of Education in relation to religious schools and its poisonous relative home-schooling, and so on and so forth.

Of course, the anti-[certain-parts-of] Federal government policy) is an important strain of Republican doctrine that goes back to the Presidency of Rutherford B. Hayes.) It does not include such regulatory agencies at the Federal prison system, the Department of Homeland Security and its active anti-undocumented persons division, Immigration and Customs Enforcement (ICE), and of course the Department of Defense. Even though Trump and his minions went full force into "Deconstruction," Bannon himself didn't last long. He was probably just too smart for Trump to have hanging around.

Among the collateral damage of "getting rid of regulation to open up the free market" was the demolition of White House's National Security Council Directorate for Global Health Security and Biodefense (which action Trump has had considerable trouble trying to explain) and major elements of such agencies as the Centers for Disease Control and Prevention. While the bulk of the cutbacks and major changes in regulations were made to increase the power of major U.S. corporations to make profits, there was also the collateral damage brought on by a combination of budget-cutting for anything other than the Military-Industrial Complex and to support tax cuts for the wealthy and the large corporations, and Trump's visceral hatred for any innovative Federal program associated with President Obama. But the important point here is that the Bannon Doctrine of the Deconstruction of the Administrative State has had a major negative impact on the Trump Administration's ability to respond appropriately to the oncoming disaster.

If Bannon himself, an apparently intelligent and well-educated man, had been asked "well, do you include in 'Deconstruction' such elements of the Federal government as those designed to ward off or minimize epidemics," he probably would have said "no." But the combination of his destructive construct, traditional Republican budget cutting for any regulatory functions, and Trump's Obama-hatred doomed the various Federal programs that could have made the Trumpidemic2020© much less worse than it is, to a combination of extinction, diminution, and poor leadership (chosen more for political adherence that expertise [sound familiar?]).

A variety of top experts in infectious disease and epidemics were either fired or left the agencies as their budgets were cut. Also, there were interesting choices for replacements, such as the current CDCP Director, who when he was on the Reagan task-force for dealing with AIDS was considered too right-wing for it (!). Why? Because his principal contribution apparently was to advocate for abstinence as a major intervention in the epidemic. The present Surgeon General, an anesthesiologist by training, was Mike Pence's Commissioner of Health in Indiana during the time of the outbreak of HIV infection among opioid addicts in Southern Indiana. The governor's policy, at the beginning, fully supported by that Commissioner, was to prevent the initiation of a clean-needle exchange program that could have reduced HIV transmission. But even the Trump CDC recently made a very negative projection of what might happen with COVID-19. It was suppressed. To his great credit, and certainly risking his place behind Trump on the podium (while of course at the same reducing his risk of infection due to closeness), on March 23 the Surgeon General issued a very strong statement saying "it's going to get very bad this week and the virus needs to be taken very seriously." Good for him.

And so, in relation to what has become the Trumpidemic2020© there was a series of events or non-events that occurred beginning last fall that has made it and its outcomes much worse than they had to be. E.g., in The New York Times there was a report of a major simulation done last year which virtually predicted the Trumpidemic2020©. Of course there were the reports to Congress this past February which, among other things, caused various members to dump stock which might take a hit in such an event as this. And etc. This all at the time when Trump and his Charlie McCarthy Sean Hannity (or is it 'tother way round?) were pooh-poohing any projections of major spread of the Corona virus here. The details of this horror-show have been reviewed here and here and in many, many other places. But where does it go from here, in terms of Trump and Trumpites? The Trumpidemic2020© is scary enough. What may happen politically in the United States is equally scary (or even scarier in terms of the history of our republic).

Originally, I thought like many other observers did that in his pooh-pooh/denial mode Trump really did want the coming epidemic to just go away or least not be tallied up because reports of any significant number of cases would hurt the stock markets and his poll numbers, and that would hurt his re-election chances. But all of a sudden there was the well-known total 180. Trump was all of a sudden pretending to lead the charge against the rapidly expanding epidemic , mainly by repeatedly telling lies about what his Administration is doing about it (and he does lie continually, there are new ones every day --- the man is very creative) and the tremendous toll it is beginning to take both on the national population and also on the woefully under-equipped medical/nursing/health-services work force that needs to deal with it. And then there was another 180, with his telling the nation that all will be well by Easter Sunday, a day that is very important to him. (Two points on that one. A) Trump has never been known to go to church with any regularity. B) Easter celebrates the "Resurrection." In the story, you-know-what came two days before it. Trump either doesn't know the whole story or chooses not to retell it for obvious reasons.)

Steven Jonas, MD, MPH, MS is a Professor Emeritus of Preventive Medicine at StonyBrookMedicine (NY) and author/co-author/editor/co-editor of over 35 books. In addition to his position on OpEdNews as a "Trusted Author," he is a Senior Editor, (more...)
Related Topic(s): 2020; Corporations; Death; Epidemiology; Government; Obama; President; Republican; Security; Trump; (more...) Truth, Add Tags  (less...)
Add to My Group(s)
Go To Commenting
The views expressed herein are the sole responsibility of the author and do not necessarily reflect those of this website or its editors.