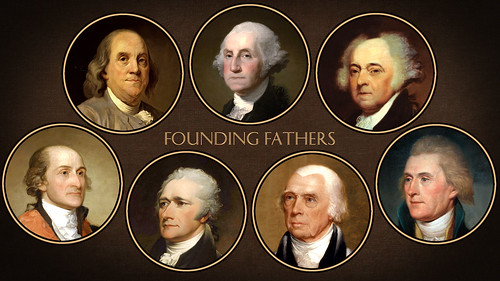 Why is that all human efforts that are supportive of life for all and promotive of life in general are experienced as up hill losing battles? The losers are those of us who fight(?) for economic equality, racial equality, equality for women as well as those who struggle to save endangered species, rain forests, clean water and air--an overall, persistent struggle on behalf of this planets life forms and life force.

The political, societal and economic influences which suppress human efforts to raise up fairness, justice and democracy are a cancer that is killing life on this planet and the the earth herself--can you not see this? Of course it is people who are instrumental in overseeing this destructive behavior, but it is the paradigm, the framework, the rules of the road put in place by our founding fathers that hold this reality in place.

Do you really think the Founding Fathers, whom we fawn over, who were a handful of elite, white slave owners who worked and raped those lesser beings as they chose could create a system embodying fairness and justice and decency?--they could not and they did not. Further, these same esteemed founders whose every word we value created the frame work we live within without input from the other lesser humans--black people, women and working men and women. Do you really think such arrogant, self serving, elitist, misogynistic rich white guys could or would create a societal structure that would encompass fairness and justice and decency-again- they could not and they did not.

Those they excluded from the initiating creative process did nothing of consequence protesting their exclusion, no demanding of their right to create their own futures. They said nothing because they were sheep. Those sheep doomed us and our planet to our fate.

Clearly, our collective doom or salvation is solidly linked to whether we have transcended our sheep like qualities or not. We need participation by evolved self responsible souls who will not allow so few to control so many. This piece is directed at those I view as fully realized humans who acknowledge their responsibility for themselves, their fellow man and woman, and the planet--these few are not sheep. It is my hope this piece will act as a triggering event for these few awakening them to the cause for which they chose to be here. Initially this is intended to expand consciousness as to what is possible and necessary. If enough of us see this as possible and necessary it will become.

So this is for today. Soon we can provide shape and form to the better future that will benefit all and the planet.

Let me be clear, installing Sanders or Warren as president will ease our psychological pain but not change the frame work destroying the planet. We need more and though we do not know at this time just what that more is; understanding that it is needed puts us on a path to a better future--help if you can.

Related Topic(s): Awakening; Awakening Waking Up; Equality; Fairness; Future; Justice; People; Reality; Responsibility; SOUL; (more...) Women, Add Tags  (less...)
Add to My Group(s)
Go To Commenting
The views expressed herein are the sole responsibility of the author and do not necessarily reflect those of this website or its editors.