Reprinted from www.counterpunch.org by ANIS SHIVANI

"Your door is shut against my tightened face / And I am sharp as steel with discontent."

"I pity the poor immigrant / When his gladness comes to pass."

In the context of NAFTA, we must think of the Wall on the southern border as a barrier that simultaneously facilitates and restricts entry. The idea of the Wall really took off in the 1990s as the depth and scope of U.S.-Mexico relations increased along with new manifestations of globalization. Thus we must think of the Wall as not the metaphoric impermeable entity it evokes, but as a form of transboundary interaction that enacts visions of discipline and authority. 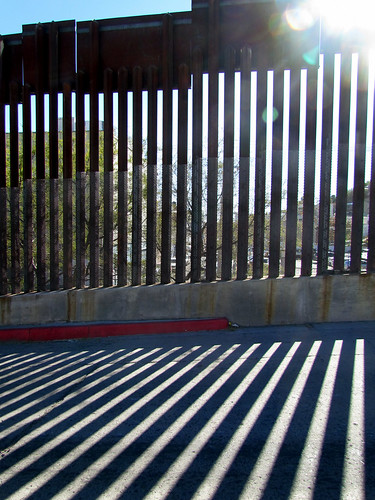 In earlier periods of American history, the matter of "unauthorized" or "illegal" immigration has not caused quite as much consternation, such as during the peak of immigration from the late 19th century to the early 1920s. But it was only when integration assumed transparent forms in the 1990s, 30 years after the enactment of the 1965 immigration liberalization, that the border suddenly began to be seen as "out of control"--and in need of a physical wall. Restrictionist measures were imposed in the 1920s, and again in the 2000s, just as immigrants' ability to assimilate reached peak levels in both periods.

In other words, so-called illegality is a matter of perception, the state creating new ways of seeing immigrant populations that have really nothing to do with actual legality or illegality.

The Wall that Trump envisions therefore becomes a way of iterating American nationhood. Social relationships within the nation-state are informed by class dynamics, whereas the Wall creates the illusion of a supra-nationhood beyond class, gender, race and religion. Precisely to the extent that the "nation" becomes irrelevant to the actual realities of science, technology, economics and culture today, the Wall arises as a fantasy to establish patterns of communication about good versus evil that have become superseded in the midst of the postmodern challenge to nationhood.

The kinds of national regulation of the movement of migrants that have manifested since the beginning of the 20th century are inimical to the logic of liberal citizenship. The two have existed in difficult juxtaposition for well over a century, but it is a perpetually unresolved tension that is eventually going to break our notions of citizenship, nationhood and immigration.

The Wall is a sadomasochistic fantasy that indicates submission to as well as pacification of the alien other, simultaneously generating systems of difference (border towns on either side of the U.S.-Mexico border, such as San Diego/Tijuana, or Laredo/Nuevo Laredo, assuming distinct, nonparallel forms) while establishing a noncompetitive method of eradicating such systems of difference. If twin cities on the border are divided by a physical Wall, then their distinct status becomes reinforced; this goes without saying, and is the more obvious aspect. However, if twin cities on the border get divided by physical barriers, then it is also an open invitation for "illegals" to break the law and enter. It is not always possible to say which aspect of the duality the state desires at any given point.

The border is never about enforcing immigration law; it is about making concrete a dream of internal order, which within the country is dressed up in a language of rights, while at the border, the point where the secure liberal construction meets the hostile other, the actions are accoutered in the language of pure violence. Outside a country's border, the same class politics manifest in war. Not to see the direct link between internal class politics, border politics and war is to ignore the most important dimension of the construction of citizenship rights.

Related Topic(s): Border Wall; Trump Wall Against Mexico, Add Tags
Add to My Group(s)
Go To Commenting
The views expressed herein are the sole responsibility of the author and do not necessarily reflect those of this website or its editors.