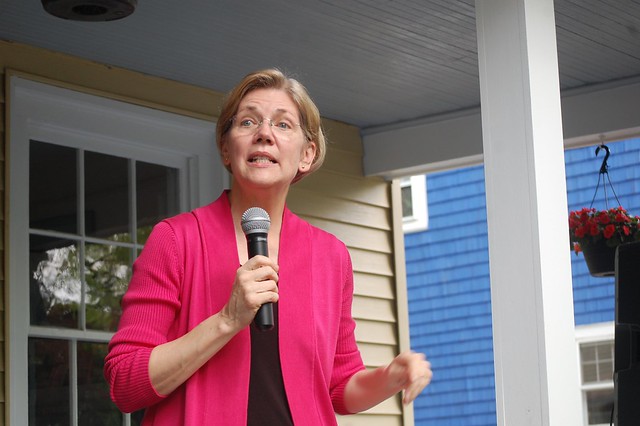 Reprinted from www.salon.com with author permission

I'm not particularly interested in rehearsing old critiques of your life and work for their own sake. But I think it's important that voters, just a few months away from the all-important Iowa and New Hampshire contests, get a better sense of your policy priorities and values. In the ongoing debates in the Democratic primary campaign, it's become easy to perceive you as Bernie-lite, one of the more progressive candidates on offer, distinct from Julia'n Castro, Cory Booker, Kamala Harris, et al., yet safely within conventional American political discourse. I think it would be better for your own prospects if there were more clarity about certain things you've said and done. With that in mind I pose some questions trying to get at your ultimate belief system.

1. In "Bankruptcy Law," your linchpin 1987 Chicago Law Review essay, you write: "Because the bankruptcy system relies on private parties to initiate proceedings, it necessarily presumes information and transaction costs are sufficiently small to permit rational choices." Your scholarship is said to have moved on from the laissez-faire "law and economics" approach upon which you cut your teeth during the early Reagan years, toward a viewpoint more sympathetic to the failings of the market.

But even in this essay, which adheres closely to your thinking from that point on, your emphasis remains on making better information available to consumers in order to make markets stronger and more efficient. In light of the three decades of market abuses that have since then come to light, both at the micro and macro levels, do you now hold a more skeptical view of markets? On health care, education, infrastructure, climate change and other critical issues of public policy, have you abandoned faith in the market? Some of your opponents in the Democratic primary are clear about what should fall within the market's purview, and what should fall outside it. Where do you stand? Is there anything you would now definitively exclude from the market?

2. In your 2003 book "The Two-Income Trap: Why Middle-Class Parents Are Going Broke," your sympathies lie with the middle class playing by the rules yet often falling by the wayside because of errors in judgment. Your financial planning advice to this fraught middle class presumes the economic playing field as a given, with the individual players needing to be astute and sharp in dealing with forces more powerful than they are, so they can have "more breathing room." As you write: "We haven't suggested a complete overhaul of the tax structure, and we haven't demanded that businesses cease and desist from ever closing another plant or firing another worker. Nor have we suggested that the United States should build a quasi-socialist safety net to rival the European model. All of the solutions we have proposed thus far - creating tax incentives for saving, expanding state-funded disability coverage, and encouraging families to insure themselves against an uncertain future - can be implemented within America's current blend of public and private systems without drastic changes or massive tax increases."

The major thrust of your advocacy in the early 2000s was the idea that the "stay-at-home mom"[was no longer] the family's safety net," so toward that end you suggested staying at home or having no children as possible options, while holding that "it is quite possible that the biological drive to pass on your genes will continue to win out over seemingly more rational financial calculations." Do finances have to be the ultimate arbiter of life choices? Why not change the rules rather than expect families to learn to better play the rules.

3. Should the Democratic Party, as some of its more progressive leaders have articulated recently, return to an emphasis on the working class, as was true during the New Deal era, or should it mostly try to alleviate the anxieties of the middle class, as has been true of the centrist wing of the party in recent decades? You admit that you grew up in the pre-feminist outlook represented by the Betty Crocker Homemaker of Tomorrow Award, which you won in high school. How far have you really moved from the money management emphasis of that course?

You cut your teeth on the "value-neutral" philosophy of the law and economics school, but your later thrust toward regulation seeks to impart precisely that quality of neutrality to the economic sphere, rather than accepting the inherent biases of a neoliberal economy, which no amount of regulation can overcome. Though you often recite the financial difficulties your own middle-class family faced when you were growing up, how was it possible for you to start off the study of bankruptcy law believing that you were going "to expose"[those] people who were taking advantage of the rest of us by hauling off to bankruptcy and just charging debts that they really could repay?"

This insight, that the middle class does not game the system, has remained the foundation of your political philosophy. But is that too narrow a base from which to provide the kind of leadership the country seems to yearn for? For example, does your hesitation to forgive all student and medical debt stem from this ethic of responsibility, which is also the foundation of neoliberal economics? In 2009, you told Newsweek that the role of government should be to "help families directly, or help markets in ways that help families," implying an equivalence between the two, when such may not be the case with the way our economy has evolved in the neoliberal direction.

Similarly, your daughter Amelia Warren Tyagi, with whom you have co-written books and who is clearly a full political partner, has set herself up as a headhunter by founding the company Business Talent Group for freelancing consultants and top executives. This company represents those who have the resources to do well under the gig economy. But can one profit from that while simultaneously being sympathetic to the plight of those left behind? The same question applies to Amelia's founding of a venture capital-backed health benefits company called HealthAllies, which was later acquired by UnitedHealth Group, currently the largest for-profit managed care provider in the world.